A few more days of winter training remain, but FC Bayern's players and coaching staff are almost ready for the second half restart. Bayern gets right into it with a home Bundesliga match this Saturday, and will be looking to avoid some of the slip-ups and errors of last season as we make a run at 3 trophies.

As I said last week, sorry for the paucity of posts over the past few days. But we'll be back in form this week as the club returns to action. And a lot of action it will be, as Bayern faces anywhere between 20 and 27 matches over the next 5-and-a-half months. I don't think it's an exaggeration to say that this is going to be a life-altering period - one way or another - for several Bayern players ... and maybe even a few fans.

I think the best way to look at the second half of the season is to break it down into quarters. Here's how I would characterize each period:

Goal: Avoid letting Leverkusen, Dortmund, or Eintracht gain too much ground in the BL chase; avoid any major injuries; keep the confidence up and the offense flowing.

This period is all Bundesliga matches. It opens with a home match against SpVgg Greuther Fuerth, followed by a trio of mid-high table opponents, then closes with a trip to VfL Wolfsburg. Given Bayern's current 9 point lead over Leverkusen and 12 point lead over next-closest BVB and Eintracht, and the fact that we don't play any of those 3, it's hard to imagine us losing the top spot over this period. Nonetheless, 4 or 5 wins from 5 would be ideal here; if we can keep a big lead after this opening phase, it will give us plenty of confidence and maybe even allow us to start rotating squad players in for some Bundelisga matches. I'm not saying we can just stop trying in the BL, of course. But if we can keep (or even extend?) that 9 point lead as of February 15, we might start to see (for instance) Rafinha and Contento in BL play as we look to keep Lahm and Alaba fresh and healthy for the subsequent phases.

Interestingly, this period will play a huge role in the fights for continental spots and BL survival. A pair of these 5 opponents are currently in the bottom 4, and the other 3 opponents from this phase are either in, or have designs upon, European spots. So Bundesliga supporters in general will be happy that Bayern is always on Gol! TV.

Goal: Secure passage in both cup competitions; maintain or expand lead in Bundesliga; repay Leverkusen for our only league loss of the year.

This period is obviously highlighted by the 2-legged battle vs. Arsenal, set for February 19 and March 13. That will clearly be our main focus, and winning that the biggest priority. Should be a fun set of games, too, as Arsenal is not known for sitting back and defending (unlike Basel, our opponents at that stage last year). They have some pop in their offense, though, so a bad day at the office could be disastrous for Bayern.

This period also sees us take on Dortmund in the Pokal (at home) and face Leverkusen in the league (on the road). Those are both huge matches in their own right - we haven't beaten Dortmund in 6 chances in meaningful competition, and a loss to them would bump us from the Pokal and probably dent confidence. A win, meanwhile, would put us on track for a chance at the treble and exorcise some recent demons. Same thing with the March 16 clash with Bayer Levs - a win avenges our earlier home loss in the BL and inflicts some damage on our (currently) closest chasers. If we take care of business on that date, we would almost be at the point where we can say the league trophy is ours, assuming we won or drew most of the other league matches during this period - Werder, Hoffenheim, Fortuna D and Hamburg. No easy task, though - Leverkusen has a dynamic attack and they won't be playing as many matches in this period (though Bender or even Schuerlle might be gone by then).

Also, this phase 2 has an international break, with Germany playing Kazakhstan, France facing Georgia and Netherlands and Croatia both playing twice. Sounds like a great chance for someone to break an ankle.

Dates: April 2 through May 1

Goal: Advance to the finals of both cup competitions, put the Bundesliga beyond doubt, round into our best form at the right time.

This is the period at which we start saying "if necessary" - we need wins in the prior phase against dangerous Arsenal and Dortmund clubs just to play a full slate here. IF we can do that, though, this will be our busiest and toughest period: as many as 9 matches in just under a month. This phase would see us play weekend and midweek every single week: CL quarters and semis (again, assuming we continue to advance), probably against tough opponents, and a Pokal semi in the other midweek spot.

Even the Bundesliga matches here are tough: the league slate for phase 3 includes battles with Eintracht Frankfurt and SC Freiburg, both of whom are currently top 5, both of whom will be much better rested than us, and both of whom may be fighting for Champions League spots. This period is going to test everything: talent, speed, depth, mental toughness, and discipline. We had a similar stretch last year, though, and we showed up.

Dates: May 4 through June 1

The frequency of matches starts to slow here (even if Bayern is still alive in all competitions), but the toughness of the opponents does not. First, we have a trip to the Signal-Iduna Park in the Bundesliga. If things aren't fully wrapped up by then, this could be a nervy experience, but even if they are Bayern would love to get a win and finish the year the right way. The subsequent matches - vs. Augsburg and 'Gladbach - will hopefully allow us to play key players for a few minutes, just to get their timing down, but not to risk injury or exhaustion.

As far as cup competitions, the CL Final is scheduled for May 25 and the Pokal final for the week AFTER that. I don't know who thought that up ... but, you know what, we don't even give a shit. Schedule them whenever you want, we'll show up and win.

Seems like as good a time as any to share another submission to our "favorite Bayern gear" request. This one is from Jonas - some stuff he picked up ahead of last year's CL Semi: 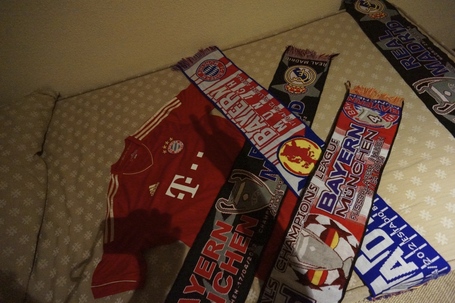 and a shot he took during last year's CL Final: 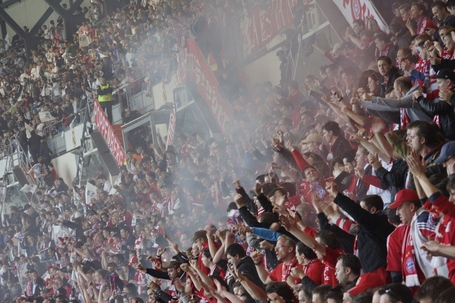 That was good practice, is all that was. This year, we're ready. Thanks for reading.