Share All sharing options for: Bayern vs. Valencia - Passing and Formation Analysis

I had a more creative title, but they're pushing us to make our titles search-engine friendly. Anyway. Yesterday's win over Valencia was not a tour de force performance, as Bayern bogged down a bit in the final third and let VCF back into the match in the closing minutes. Nonetheless, it was a solid performance, and an especially solid outing from one guy in particular.

Considering the entire match, I think this was one of the best shifts that Toni Kroos has ever put in for Bayern. Maybe not the best, but this was up there with any of his best games. Although I still prefer Müller in the second-striker / hole spot for the toughest opponents, Kroos is making it a much harder decision. And more importantly, their different styles of play are giving us different options depending upon what we need to accomplish on a tactical level.

If you look at UEFA's match stats, which you can see here, you'll discover that Kroos completed 45 of 57 passes - god for a 79 percent clip. OK, that's decent, but not great or anything. But look more closely, and you can see that he completed the most passes to Ribery, Javi, Bastian, and Robben - 5 or more complete to each of them. He completed only 3 to Pizarro, and honestly I don't even remember that many. Kroos definitely likes to sit deeper in the field and concentrate on build-up play, as opposed to (for example) Müller, who prefers to cut through soft spaces in the opponent's back line and/or work one-two passing with the lead striker. In fact, with Kroos in the 9 spot, we almost have a Barca-like series of integrated passing triangles.

The initial one consists of Kroos, Javi, and Bastian in the center of the pitch: 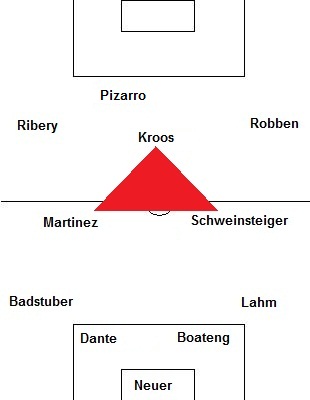 This kind of thing only works with two CMs who can pass the ball accurately, even on the first touch. That's why, without meaning any offense to Gustavo or Tymoschuk, Javi works better for that kind of tactic. All three of those guys can gather a pass and send it on to the next guy quicker than a defender can close in and attempt to win the ball. Moreover, you can turn those passing triangles to the outside and incorporate the wings on either edge of the pitch, like this: 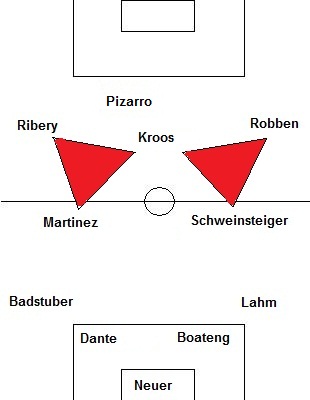 Now, there are a few disadvantages to this approach. First, the striker tends to get a little isolated up top. Although a player like Müller will bring the striker into the play a little more, Kroos is mostly sitting deeper than the opponent's DM line. That leaves defenders marking the striker AND an additional layer of defense in front of the striker, making it harder to break down the defense. Plus, if the opponents defenders do try to get aggressive and charge upfield to make tackles / win the ball, Kroos doesn't really have the stamina or the lateral quickness to punish them by slithering in behind them and finding the open spots.

But the advantages to the Kroos-Javi-Bastian triangle are clear: it can basically keep the ball out of the opponents' possession for long stretches of time, and allow Bayern the chance to pick out dangerous passes from the middle of the pitch. This is also due to the fact that Kroos has a good shot from distance - the Valencia players were pretty much trying to just keep themselves between him and the goal, rather than trying to run at him and break up the flow of passing (we saw this in the CL Final, too, although Toni was playing a CM spot himself that day).

Moreover, when a team is able to work a series of mobile and interlocking passing triangles, it makes it easier to "out-flank" the defense - by which I mean, establish a threat on one side of the pitch, allow the defense to react to that threat, then work the ball even further out to that same side. Because Kroos has a deeper / higher spot on the pitch, and because the threat of his shot can keep opposing players pinned in (or near) the area, it gives Ribery and Robben a chance to cut inside. Not so much the traditional Robben inside-cut with the ball at his feet (he prefersto do that with more Bayern players above him, which is why he does it when Müller is on the pitch). This is more a case of Robben or Ribery actually filling into free space and serving as a target man in a passing triangle (or passing diamond, depending on the situation): 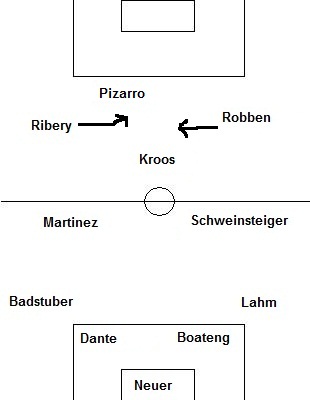 If the offense is able to work the ball from the middle or left to the right, Robben takes the ball at his feet and has established a threat from the right side (left side, from Valencia's point of view). The defense will obviously react to that threat, and the FB will close in to mark Robben or try to hassle him. That allows Bayern to get around the far flank by bringing in, for instance, Bastian or Lahm further around that side, like this: 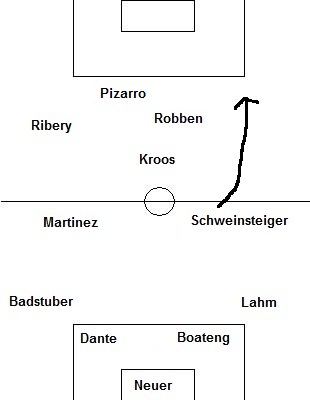 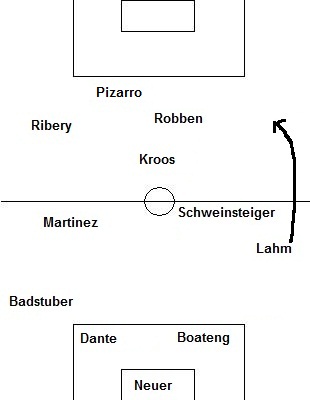 (Just imagine it going to the other side for a left-side out-flanking - although Badstuber's not much of a threat to do that, it can be deadly with Ribery-to-Alaba).

For a look at how it all comes together, check out the start of this clip:

I'm sort of putting all this together in my head, so weigh in if anything is wrong or needs further explanation. Seems like a threatening offense, though, from an opponent's point of view.

We'll be back later with the Schalke preview, which promises to be a big match between Bundesliga teams that are both going to be in Champions League contention thanks for reading.