Javi to Bayern: Where Does He Fit In, Who's On the Way Out?

Share All sharing options for: Javi to Bayern: Where Does He Fit In, Who's On the Way Out?

So, after weeks of rumors, false starts and media speculation, we saw that Javi Martinez made the move to FC Bayern today. A lot of us have only seen Javi play a few times, and can't say for sure precisely what he brings to the table. But I do think we have enough information to make some guesses as to where he might fit in.

My hunch is that, despite his touted versatility and his ability to play CB as needed, we bought Javi mainly to play CM. Between Badstuber, Boateng, Dante, and van Buyten, we would need to be in deep trouble with injuries or slumpage before we had to move Javi to CB (even Tymoschuk was good at CB during the Champions League final). Martinez is said to be blessed with excellent vision, good stamina, good tackling and ball-winning skills, and - unlike many of our tackling specialists - an ability to steal or win balls and then quickly turn the play into an attack. This skill set would fit nicely next to Schweinsteiger. But Gustavo also fits well next to Schweinsteiger, and Kroos and Gustavo both looked excellent in those midfield spots for much of last season.

It's hard to predict what line-up might be used for any particular match, because injuries, fatigue, match-ups, and form all play a role. With that said, let's assume - just for a moment - that we're going into a huge match that we really need to win, and that everyone is fit, healthy, playing well, and suspension free.

Here's how I think we'd line up: 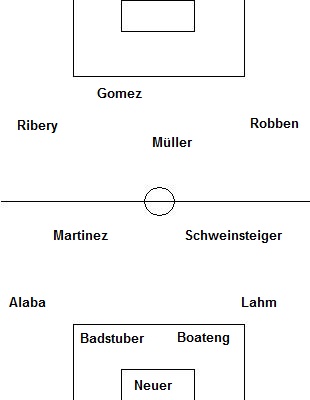 Obviously, there are a million contingencies: Gomez and Alaba are currently out, and they'd need to be back to full health and 100 percent form; Ribery and Robben have struggled with injuries in the past, and will certainly get rested for some matches; if Shaqiri keeps playing well, we might need to get him on the pitch somehow; Alaba was awesome last year, but really only has 1 year of experience as a starter at LB; etc. But, for purposes of this discussion, let's say that's our optimal starting line-up. In that case, our bench would probably almost certainly include the following:

You need a back-up 'keeper and at least one back-up CB, Shaqiri certainly needs to be there (he'd probably be the first attacking / instant offense sub), and Kroos probably needs to be there (because he can play a defensive midfield or an attacking midfield role, and he's pretty damn good at both). Mandzukic is not a guaranteed spot, but the way he's been playing recently, I think he'd be a good bet for a late-game striker substitute (at least).

That would leave only 2 bench spots for the following guys: Gustavo (probably has to be on the bench), van Buyten (very well might not dress for some matches), Tymoschuk (ditto), Pizarro (very interesting question), and Can (way down in the pecking order - might need to go out on a loan for a year). So it looks like Tymoschuk, Gustavo, and Can are the ones who stand to lose major minutes with Martinez's arrival. Bastian certainly starts if he's healthy. Kroos might be a little less likely to start, but he's still going to play in a majority of matches and might get the start for some of them. Shaqiri's role hasn't changed, none of the CBs' role has changed, but Gustavo, Tymo, and Emre Can were all hopeful of getting solid minutes in those CDM spots.

Gustavo will probably drop from sometime-starter to occasional starter and sometime-sub. Still not a bad place to be. Can probably wasn't going to see much action once Alaba returned anyway. It's mainly Tymoschuk who I feel bad for, because he's still got skills, he's a hard worker, and he's done a good job for Bayern at several positions. But ... he's also nearly 10 years older than Martinez, and probably has a more limited range of skills. Some people have floated the idea of him leaving over the next 2 days, but I don't think that's likely. Considering the injuries we've had, I think he hangs around for this year, then takes off in the summer of 2013 (along with van Buyten, probably).

There is one more option - one which I used to bring up at the old site. Does anyone remember my idea for a 3-2-1-3-1? It might look something like this: 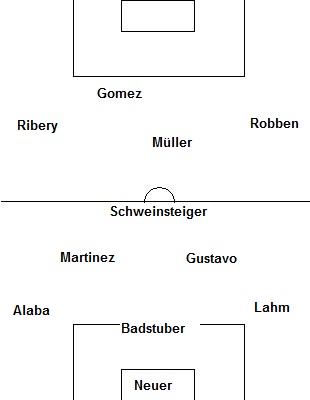 If the opponents have a 2-striker set, or if they have a striker who's really good, the "2" line (Martinez and Goose, in the above configuration) play very deep, almost like a 5-man back line. They only venture upfield if we have a long-build-up, but the FBs can have more freedom to roam upfield if there's room. So it almost becomes a flexible 5-1-3-1: 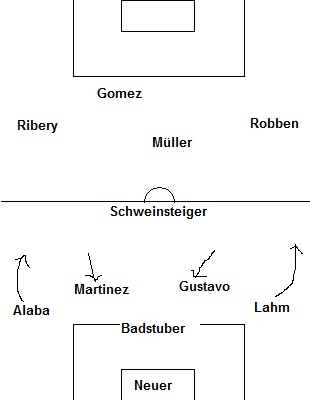 Whereas, if the opponents are more threatening from the wings, and/or don't present much of a threat right up the middle, the FBs stay pinned to the back line, and the CDMs have more freedom to move upfield, to move out into the flanks, or even to switch with Bastian and shuffle the midfield line. So it becomes more of a flexible 3-3-3-1: 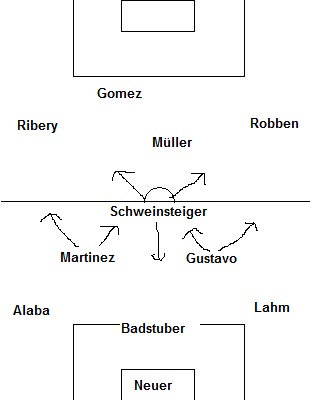 Either way, the most important person is the "1" the guy in the middle. Schweinsteiger would have to be able to get back and play defense, to win balls and break up opponent's attacks in the middle of the field, and to get forward and get involved in the offense - not just build-up, but also shooting and scoring. If we could do that, though, it would give us one more non-defender spot to play with - with Shaqiri, Kroos, Mandzukic, and a few other talented guys on the bench, this might be a wrinkle worth considering.

Anyway, we don't really know what's going to happen in the near future. In the long-term, though, Javi was brought in to start. It seems like Uli wants Martinez + Bastian to be our midfield pairing of the future, but we all know Jupp Heynckes is a big Kroos fan, so nobody should feel secure in their spot right now. I guess that's a good thing. And at least we know we won't be out of luck after one or two injuries like we were last year.

Back with more later, and keep in mind we'll be here for the CL draw tomorrow. Thanks for reading.