Or "Augsborgo," as they would say on Gol! TV. This is week 29 in the 2011-2012 Bundesliga season, meaning every club has this match plus 5 more. Very live races remain at the top of the table (where Bayern and BVB will battle for the title), at the "high-middle" section (where 5 clubs are fighting for 2 Europa League spots), and at the lower reaches (where 7 different clubs are either in the relegation zone, or theoretically within one bad week of being there). Bayern needs a victory here to keep within touching distance of BVB, but would also probably like to rest a few guys if possible. So let's make a few haphazard guesses at ...

First things first - it appears that everyone is healthy. Thomas Müller was substituted early in the victory over Marseille earlier this week, but he is ready to go for this match, at least if bettor.com is to be believed. Bastian Schweinsteiger is fit and will assuredly be rested after missing the Marseille game due to suspension. Arjen Robben and Mario Gomez both started that match on the bench, so they would probably have something in the tank. Pranjic has slowly worked his way out of Jupp Heynckes' dog-house. Here's my weekly guess: 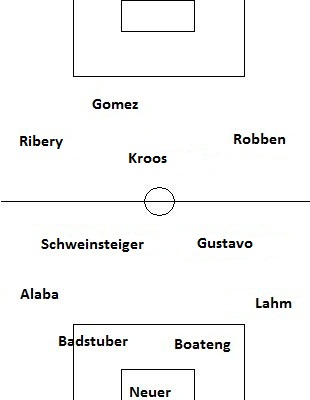 UPDATE - Gustavo will miss the match on accumulated yellows. Sorry, bad math by me. Looks like Tymo is a good bet to play, although the Schweinsteiger - Kroos duo in the midfield is still a possibility. Thanks to Gilly for the update.

Not too much different from the standard line-up, with Müller being the only guy taking a seat. But plenty of options abound, with a huge midweek match upcoming: we could bring in Contento or Rafinha and let one of our FBs get a break, we could bring on Tymoschuk at any number of positions, and we could use Müller on one wing and give Ribery a rest. Even if our starting line-up is along the "standard" lines, an early goal might allow us to take out foot off the gas a bit. But no guarantees, because our opponents have been playing well lately.

Augsburg have gone undefeated in their last 6, with 3 wins and 3 draws in that time. Their victory over Koeln last week brought them out of the relegation zone. But they still have everything to play for - a loss tomorrow would risk dropping them back into the bottom 3, so they'd love to pick up a point. I expect a pretty defensive outlook from them, with Bayern controlling possession but forced to try to break down a 9-man defensive fortress. So what else is new?

The Auggies are this year's draw-meisters in the 1. Bundesliga: they lead the league with 12 draws in 28 matches. Offensively, they're not a powerhouse, with only 30 goals in the league. But they can punish you if you let them hang around. They held Dortmund to a draw a few weeks ago, and they beat BMG 1-0 earlier this season. Even in their last match vs. Bayern, which we won 2-1 and in which we dominated possession, they were a nice play by Neuer away from equalizing with less than 10 minutes to go.

Dortmund has a not-entirely-simple match on the road vs. VfL Wolfsburg. The Wolves are one of those 5 clubs fighting for a European spot, so hopefully they can come on strong and take a point (or all 3?) from this one. Other clubs in that battle-for-the-top-six include H96 (on the road vs. Schalke), VfB Stuttgart (hosting Mainz), suddenly struggling Leverkusen (at Hamburg SV), and Werder Bremen (traveling to Koeln in a huge matchup for both sides).

As far as the relegation battle, the aforementioned Hamburg and Koeln are desperate for points, as are Augsburg, Hertha (visiting BMG) and Nurnberg and SC Freiburg (playing each other - winner of this one can probably feel secure in staying up). Lowly Kaisterslautern is probably as good as doomed, although a win at home vs. Hoffenheim would give them a glimmer of hope.

- The match will air at 2:30 PM local time, 9:30 AM Eastern in the USA. It will be carried live on ESPN Deportes and ESPN 3 in North America. We'll be here tomorrow morning with a Match Day Thread, but I think I'm done with the chat-boxing.

- As of this time, the pre-match prediction poll has 12 of 12 responses predicting a Bayern win over at bayernforum.com. Anyone feeling more pessimistic? I think we'll win, but this is a classic trap game.

- I wonder if we could maybe spread the love a bit as far as finding the goal - right now, Gomez and the two wings are gorging themselves, and no one else has more than a handful. Daniel van Buyten is tied for 4th on our Bundesliga scoring list, with 4 goals - the same number as Kroos and Müller, and more than Schweinsteiger (3), Olic (2), Badstuber, Lahm, or Rafinha (all with 0). Sure, some of those guys are defenders, and some have missed big chunks of the season. But van Buyten is a defender, and has missed the last 3 months. He's still 4th on our team in goals? Only 5 players on our roster have double-digits in shots on goal this year in Bundesliga play (although Gomez leads the bunch with 50). I'd love to see Bastian or Lahm find the net this week.

- After the match, we'll be back with goal videos and a recap. Then, it's right back on the horse - Dortmund match this coming Wednesday, so we'll be here to preview that one by Monday. Thanks for reading.