Some Numbers from the Gallery - Plus Preview vs. TSG Hoffenheim

Share All sharing options for: Some Numbers from the Gallery - Plus Preview vs. TSG Hoffenheim

A very interesting lead-in today, courtesy of Chullalobo. He put together some graphical evidence concerning Lucien Favre’s tenure at Borussia Monchengladbach. Jupp Heynckes’ status has been discussed in the comments sections of several recent post, with Favre named as a possible candidate to replace him. But it’s always better with real numbers, right?

The following two graphs indicate goals-for and goals-against per game for Favre’s current Monchengladbach side, along with the same numbers for FC Bayern for each of the past 3 seasons.  Goals-for: 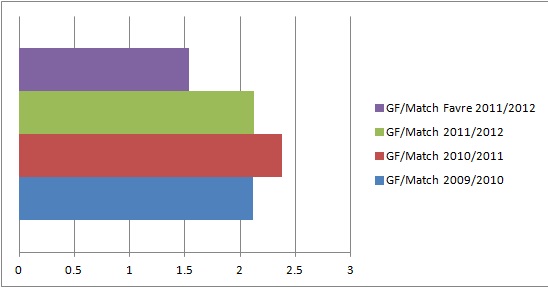 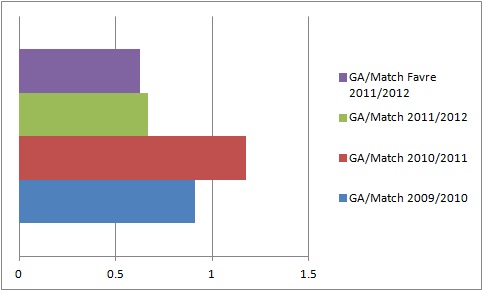 You can see the defensive mindset at play with BMG - both goals for and goals against are lower with their current side than with Bayern’s current side or our teams of the past two years.  Some initial impressions:

(2) During this current year, both defenses are good - under 0.7 goals per game allowed.  How much of that is tactical and how much is based on strength and talent of defensive players is debatable, of course.

(3) BMG’s goals for this season are much lower than I might have guessed.  The counter-attacking style is in vogue right now, with Napoli and BMG earning praise from various pundits.  But it doesn’t always work.  If the other team isn’t giving you anything to counter-attack, the game falls into a stalemate. 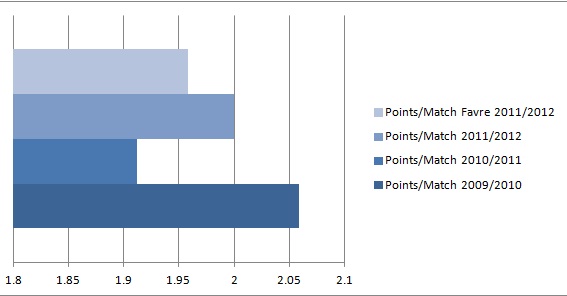 So, yeah - again, last year was uglier than this year, lest we forget.  Our current pace is slightly ahead of ‘Gladbach, after their loss last week.  But keep in mind these are all based on small separation: every line on the graph terminates somewhere between 1.9 and 2.06 points per game.

These will change after this weekend, of course, but some interesting food for thought on the ongoing coaching discussion.  Thanks for the pretty graphs, bro.

EDIT - Jon also has some numbers to add:

by looking at this we are losing two key players throughout most of the 2012 both offensive and defensive side.

Saturday’s match has several important sub-plots, so let’s dive right in.  First and foremost: win need a win.  Duh.  With 10 matches to go and a 7-point deficit to make up, we probably can’t afford to drop any more points.  And we definitely can’t afford to drop any against Hoffenheim.  Christian Nergliner is on record as saying we’re out of the running for the Bundesliga title, but I’m not quite ready to surrender yet (I’m sure he’s not either - probably just a reverse psychology-style line).  With Dortmund on the road (more on that in a minute), it’s not impossible to think we could make up some of that 7-point gap.

First, the big news: Bastian is back.  Yayyy!  It’s his first match since the ankle injury, so he likely won’t be up to full speed.  In fact, Basti himself says “I am not 100% yet.”  Still, his return should serve two purposes: one, his vision in experience in the midfield might help wake up the offense and start creating some space up front.  And two (more importantly , in my opinion), if he can get in a few minutes of work at match speed on Saturday, he’ll be much more likely to help us have a big game this coming Tuesday.  So, my predicted starting line-up: 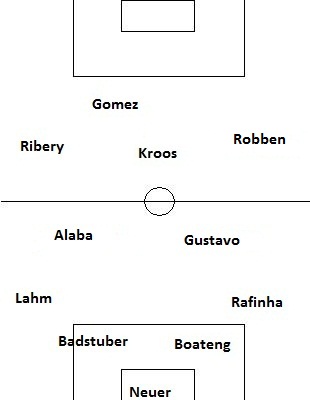 Keep in mind two things:
(1) this is what I’m predicting the starting XI will be at kick-off, not who I think it SHOULD be, and

For some reason, I have a hunch that Bastian might come off the bench rather than start.  If we can’t break down the Hoffenheim defense, it will be sold as “bring him on to spark the offense,” while if we are already winning, it will be “low pressure situation to let Schweinsteiger get his feet wet.

Kroos over Müller is just a hunch.  Robben and Rafinha both missed a practice this week, but should be ready to go.  If Rafinha isn't ready, Nine-Toe Diego might get some action.

Since bringing in Markus Babbel at head coach, Hoffenheim is undefeated in 4 matches (although 3 of the 4 were draws, with the one win coming against mediocre Wolfsburg).  TSG is the epitome of the mid-table team: virtually even goal differential (-1 on the year), a lot of draws, slightly better at home than on the road.

Defensively, they’re actually pretty solid: 28 goals allowed on the season, good for 4th best in the league, though still nearly twice the number surrendered by the top 3 clubs.  Goalkeeper Tom Starke, after bouncing around several clubs over the past decade, often in the 2. Bundesliga, seems to have found a home.  He’s produced 6 shutouts this season, including one against us and one against BVB.

If you’re looking for a reason to call it a “grudge match,” then I guess it’s former Bayern man Edson Braafheid taking on his old club.  I know, it’s not much.  Also, they stopped our early-season win streak with a 0-0 draw back on October 1.  Seems like a long, long time ago.

Brklyn Bayern points out some more "grudge match" potential: Gustavo used to play for TSG, and Alaba did a loan spell there.  This is going from me jokingly trying to make it into a grudge match into an ACTUAL grudge match.  Think we'll get a fight?  Or would that me "slumming it" for Bayern - like Lennox Lewis picking a fight with some drunk at the bar?

Dortmund is the late game tomorrow, on the road against Augsburg.  The visitors will certainly be the favorites, but Augsburg is respectable at home (3 wins, 3 losses, 5 draws) and actually hasn’t lost at home since we beat them in November.  I know I’m being needlessly optimistic, but I think they might have a chance to take a point from this match.

Also, ‘Gladbach hosts SC Freiburg, Hannover travels to Bremen in a match that could have implication on Europa League spots, and Stuttgart plays Kaiserslautern tomorrow if you’re bored on a Friday evening.

- Our match will be broadcast on ESPN Deportes, starting at 9:30 AM Eastern USA time, 3:30 PM local at the Allianz.  We’ll be here with the Match Day Thread about a half hour before kick-off, depending on the end of the QPR match (which, amazingly, is on ESPN 2).

- Several news outlets were replaying rumors that Heynckes could quit the club, even if he’s not canned.  But the club hit back this week, saying that JH has the board’s backing and threatening legal action.