A Bavarian Derby highlights the fixture list in Match Week 28 of the 2011-2012 Bundesliga season. Bayern comes in on a roll, having won 6 straight across all competitions. Technically that's not true, we won 5 and "advanced on penalties" once, but I'm going to stop with that disclaimer and just say we've won __ in a row. Nürnberg was one of the season's surprises for a while, battling for one of the top 6 spots for much of the year, but 3 straight losses have dragged them back down the table. Looks like a very favorable match-up for Bayern, but Nurnberg will be the more rested side, and Die Roten are not a lock on the road.

Because Bastian Schweinsteiger seemed fit in the second half of the Marseille game, and because he's suspended for mid-week play next week, I have a hunch he's definitely going to get some action. I also wouldn't be surprised to see a bit more rotation, given our busy schedule - maybe Rafinha or Contento getting a look at FB, maybe one of our wings getting a rest. But because we already have a 2-0 lead in the Champions League tie, it wouldn't be a shock to see this match treated as equally important, and some of the "take a rest" slots reserved for this coming Tuesday. My unqualified-as-always prediction: 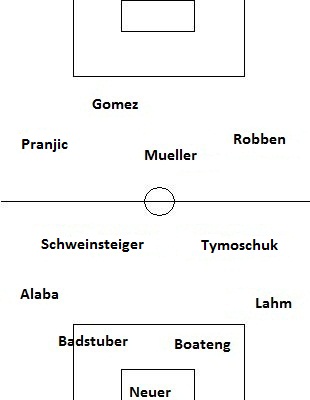 As I said above, I have a hunch Bastian will start, and I'm also predicting some rest for Ribery, Kroos, and Gustavo. No reason, just think they might get a few minutes off, and Pranjic seems to have earned at least a minimum amount of trust. Other options would include Kroos taking a turn towards the front and Müller getting a rest, Lahm finally getting a break and Bastian wearing the armband, and maybe even Gustavo at CB. The club's official site doesn't give any indication as of right now, but we'll update tonight or tomorrow morning as necessary.

Apparently, these guys are supposed to be our hated rivals? The Bayern site has some thing up about the long history of the Bavarian Rivalry. I always thought they were kind of cool. Shows what I know.

Three years ago, Nürnberg played in the 2. Bundesliga, and even two years ago they flirted with relegation. But last season they put it together, finishing 6th in the table behind German striker Christian Eigler and a much improved defense. This season started well again, but the afore-mentioned swoon had brought them back to earth: three straight losses to mid-table rivals (Mainz, Wolfsburg, and Stuttgart) leave them far away from their goal of competing for a Europa League spot.

Nonetheless, Nürnberg won't lie down too easily. Alexander Esswein, the young German striker (just turned 22) has starred for the German U-20 and U-21 teams, and some have hinted he might get a look at the senior level after the upcoming Euro Championships. And their home record is respectable: 5 wins, 5 losses and 3 draws, with victories over Monchengladbach and Koeln and a hard-fought 2-0 loss to BVB (in which they were level at halftime) all coming in Nürnberg.

As I write this, BVB is beating Stuttgart 2-0 and will probably go on to win. If Bayern were to come away with anything less than a victory tomorrow, our chances at the Budnesliga title drop precipitously. Also this weekend, Werder Bremen hosts Mainz as Werder tries to maintain a Europa League spot, suddenly struggling 'Gladbach travels to Hannover, and Hamburg and Kaiserslautern face off in a vital match between clubs in the bottom 3.

- This one will be broadcast on Gol! TV live tomorrow, kicking off at 2:30 Nürnberg time (9:30 AM here in the states). We'll be here with a Match Day Something, depending on how early I can get up.

- Marseille forward Andre Ayew says he would be excited to join Bayern. I forget their first names - is this Marseille's crappy Ayew, or Marseille's even-crappier Ayew?

- So, you like mismatched derbies, do you? Well, when the Bayern match is over, switch to Fox Soccer Channel PLUS to catch the end of the Arsenal - QPR match. A loss would probably doom QPR to relegation, meaning I'd have more time to worry about the Bayern blog.

- Last, a weird question: does anyone here speak Portuguese? If so, and you have like 3 or 4 minutes to spare, e-mail me at bayern.offside@yahoo.com when you get a chance. There's no money involved or anything. Thanks for reading.