In the first leg of the 2011-2012 UEFA Champions League quarterfinals. Bayern advanced to this stage with a two-leg victory over FC Basel, in which we lost the first 1-0 but exploded for 7 goals in the second. The club has won 5 straight overall, though the last two were not easy (we needed penalties to get past 'Gladbach, then a scrappy 2-1 win over Hannover last weekend). Marseille, meanwhile, has been slumping for the past month: they got past Inter Milan on away goals in the Champions League, and actually haven't won a Ligue 1 match since the beginning of February. Still, they have decent talent and can strike quickly, so Bayern will need to be firing on all cylinders to come away with lead after this first leg.

Basti is doubtful for this match, although he is on the squad list and Jupp Heynckes won't rule him out. Barring a miraculous recovery, I think we'll see Kroos and Gustavo at the two CM spots, with Alaba and Lahm at FB, in the same way we lined up for most of our current winning streak: 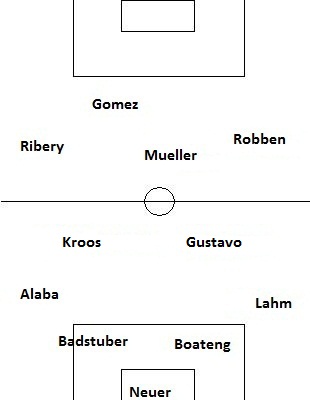 If we were hell-bent on rotation, Tymoschuk, Olic and Rafinha might get a look, but I think those three are more likely to feature off the bench if we're able to get a lead.

Given the suspension of Mandanda, the injury to Soule Diawara, and their generally mediocre recent form, this would seem to be a good match-up for Bayern. But Marseille isn't without any star power. Loic Remy, the talented striker, is a "maybe" as he tries to recover from a hamstring injury in time. Mathieu Valbuena, the veteran mixed-use forward, will be available, and he can make things happen if we fail to shut him down on the ball.

Interestingly, it's unclear who will be tending the net for Marseille. Goal.com says it will be Gennaro Bracigliano, while Goal.com India predicts that it will be Elinton Andrade. Nice synergy, there, goal.com.

Ribery says "they're dangerous, their stadium is a tough place to place, etc., etc." Go read it if you want, I'm busy.

- Mario Goetze signed a new contract with BVB. Interesting ... certainly gives them a great young core, but with Reus on the way in and Geotze returning, they're running out of places to put them all. Barrios on the way out?

- Kaiser Franz likes Claudio Pizarro for a return to Bayern. I'm only vaguely familiar with his first stint with the club, but this seems like a reach. I guess if we needed a back-up and he was willing to play in that role, it might work. But I think we can do better than Pizarro - no offense to him, it's just not really a forward-looking option.

- Match starts tomorrow at 2:45 PM Eastern USA, which is now 6:45 PM Greenwich mean time and 7:45 local (Marseille) time. If we have to even do daylight savings time anymore, why the hell can't we at least all start it at the same time? Christ. Thanks for reading.