Some Things We Learned

Share All sharing options for: Some Things We Learned

Great wins for FC Bayern Saturday and yesterday, and our quest for multiple trophies is back on track. Some particular take-away points from yesterday’s match:

I’d caution against too much optimism here, because they haven’t really been tested very heavily. In the last two matches, our offense was on fire early and the midfield controlled a majority of possession - the defense basically just had to mop up a handful of chances. Still, they did a good job with that. Yesterday, both fullbacks looked good, and the few times that Basel got a good ball into a threatening spot, Badstuber and Boateng did well to clear.

Regular readers know that I’ve been one of Rafinha’s biggest supporters.  And I do still think he could be a useful and very productive player, in the right capacity.  But right now, Alaba and Lahm seem to be our best FB pairing.  Alaba was dangerous getting forward and linking up with Ribery and the middies (which we always knew he could do), but he also did a good job of defending against a pretty dangerous Basel offense.  And that weird chop-stroke slide tackle that he’s developed is devastating - it always looks like he’s going to foul someone, because he brings his back leg down in a savage arc, but he actually just slams his foot into the ground before it gets to the player he’s marking.  So either he’ll get a piece of the ball, or he’ll just force the opposing wing to dribble further upfield to try to get around him (where the offensive player usually runs up against the end line). 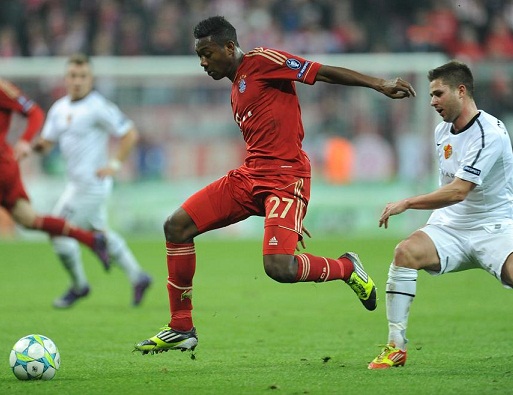 Lahm looks good at RB, and was useful in springing Robben a few times.  Although we ought to stop jerking him around.  I’m sure Heynckes will now move him BACK to LB next month.

(2) Once Bastian returns, we still have a numbers problem

This is a good problem to have - certainly much better than the problems we had in January and February.  But if Bastian is back to 100% and in the starting line-up, then we’re left with the same issue that we had at the start of the season: where does Toni Kroos fit in?

He can play in the central attacking midfielder spot, but Müller has been doing a better job there recently, and yesterday’s performance left little doubt that the Ribery - Müller - Robben line is the most likely to lead to dangerous chances, constant pressure on opposing defenses, and goals.  In the midfield, Bastian figures to get one of those spots once he comes back.  Ideally, we could play him next to Kroos, but it’s usually a better idea to have one defensive minded guy at the CDM spot (i.e., Gustavo).  So, we can either try Kroos-Schweinsteiger in the midfield, or use Kroos as the super-sub - coming on in the second half at either the CDM spot, or in the hole for Müller (or with Müller moving to one of the wings of Robben or Ribery needs to come off).

(3) There’s a fine line between winning big and losing

Yesterday was an amazing win, and looking back on it, Basel never had a chance.  It’s worth noting, though, that our squad was mostly the same as the last time we played Basel - starting line-up added Müller and Gustavo and lost Tymo and Rafinha, with Alaba and Kroos each moving back a bit.  But Gomez, Robben, Ribery, Neuer, Boateng, Badstuber were in the starting XI, and involved in similar roles, in both matches.

The outcome was massively different.  But does that mean our players got a whole lot better over the course of 3 weeks?  To an extent, maybe they did.  And certainly playing at home helps.  But in that last Basel match, we had 3 good chances in the early going: Gomez blew a header, and Ribery had two shots - one that he blasted wide, and one that was well-saved by Sommer.  If any one of those had gone in, Basel would have had to push forward looking for a goal, and Bayern would have had a chance to go on to a decisive win.

I’m not saying we would have scored 7.  Yesterday was a special performance, when everything was clicking.  I just think it’s interesting to see how a team can struggle to get past a defensive-minded opponent, but once you get a goal or two (which can be a matter of inches), the opponent has to push forward, and the floodgates can open.

If you think there’s anything else we learned from the past two matches, feel free to share your opinion.  You can leave it in the comments, or write to us at bayern.offside@yahoo.com anytime.  Back tomorrow or Friday morning with the Hertha preview.  We’re on the road, and if we come out flat in that one, things can start to fall apart just as quickly as they came together.  Thanks for reading.