In the second leg of the UEFA Champions League Round of 16 tie. Basel comes into the match with a 1-0 lead from the first leg. Obviously, this gives them a big advantage - not only do they have a lead on the scoreboard, but Bayern comes into the match with the imperative to be the more aggressive side. This allows Basel to sit back and play defense, and also opens up the possibility of a counter-attack, especially if Bayern is bringing midfielders and fullbacks forward in an attempt to generate offense.

Nonetheless, I think Bayern supporters are feeling quietly optimistic. I won’t say "confident," because you can never feel confident when you’re losing, but we definitely have a shot. Our offense played well last week, and in all of our last 3 matches, we’ve created numerous chances and looked dangerous from the wings (the 1 of those 3 we lost, vs. Leverkusen, we still had several good opportunities - it was poor finishing and a few good defensive plays that kept us out). Ninety minutes is a long time for Basel to sit back in a shell and try to ward us off, especially if Schweinsteiger is on the pitch. Which leads us to …

Three Bayern starters limped off with knocks in the win over Hoffenheim: Gomez, with a bad cut on his shin, Boateng, with muscle tightness, and Robben, with generic, seemingly-painful-but-non-specified lower body ailments.  The club’s official site says that “Of the three, Gomez is causing the most concern” - interesting.  If he can’t go, we could either start Olic in his place, or move Müller up top.  I doubt Petersen is ready for this kind of match.

Heynckes is playing it quiet with respect to Bastian, telling everyone he hasn’t decided yet.  I felt like he looked good enough in his brief appearance on Saturday, although he wasn’t really being challenged by that TSG midfield (which has pretty much packed it in by the time he came on).

I’ll throw out my prediction - remember this is what I think WILL happen, not necessarily should: 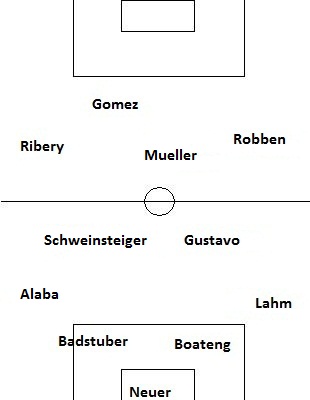 I think Gomez will be fit enough to play, and I think Heynckes will let him.  I think Rafinha will either (1) still be under the weather with his illness, or (2) Heynckes will at least pretend that he is, and take this opportunity to leave him on the bench without having to embarrass him.  And I think he will suddenly decide this is the time to leave his boy Kroos out of the line-up.  Don’t ask me why - just a hunch.

As we pretty much already knew, Basel is not a team to be taken lightly.  But, I don’t think they should inspire a lot of fear, either.  You could say, “well, they only have to play defense” - but that’s pretty much all they did for the majority of the last match, and we still got several good, clear chances on their goal.  If I had to bet on it, I’d say the chances that they keep us out for the full 90 minutes aren’t that high.  The bigger problem, in my mind, is actually the danger that they take advantage of our aggression to hit us with a counter-attack; if they pick up a single goal, we’d need 3 to advance (having failed to notch a single away goal) which really WOULD let them park the bus.

Park Joo Hu will likely be absent for Basel, having missed their recent domestic match (a 2-0 win over Grasshoppers).  Otherwise, they’re at full strength.  Shaqiri, Streller and the two Freis are their best offensive options, but it was GK Yann Sommer and substitute wingback Valentin Stocker who did us in last time.  Their starting CBs, Dragovic and Abraham, generally played us pretty well, although Ribery and Gomez both found some room to operate and could (should?) have scored in the first half.

- Let’s hope the home/away difference is a real phenomenon and not a coincidence: Bayern has won 8 straight at home and, amazingly, all by margins of at least 2 goals.  And you know the crowd will be up for this one.

- Looks like it will be fairly warm tomorrow, with little-to-no chance of rain.  Good goal-scoring weather.

- If you’re in the US, keep in mind the daylights savings change will alter the start time: the match will kick off at 3:45 PM Eastern our time, rather than 2:45.  Locally, it’s still the same - 8:45 PM Munich time.  We’ll be here before the match with line-ups and a Match Day Chat Box.  I try not to censor or edit the Chat Box posts, and I know supporter’s immediate reactions can be intense and sometimes crude.  But let’s try to keep it within reason.  Thanks for reading.