The Hunt for the Circular Trophy with the Strange Green Jewels

Share All sharing options for: The Hunt for the Circular Trophy with the Strange Green Jewels

Welcome back. In the aftermath of FC Bayern’s disappointing 1-1 draw to Hamburg SV, there are many valid criticisms to be made, and at least a few reasons to be genuinely worried about the club’s chances in all competitions this season. However, from the objective standpoint of a neutral observer, there is a silver lining: the 1. Bundesliga race is as wide open as it has been in recent memory, with 4 teams all claiming a legitimate shot at the title. In fact, the race for the Bundesliga title is more compelling and more competitive than any of the other title races in Europe’s main leagues right now. Don’t believe me? Climb aboard for some closer examination. 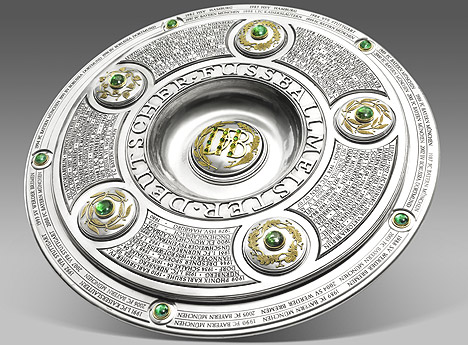 Right now, the top 4 in Germany look like this:

After that, a big gap before Werder B and Leverkusen.  No disrespect intended against those 2 clubs, who are still dangerous in any given match, but I think it’s fair to limit our inquiry into these top 4 teams.  By way of comparison, the current top 4 in England:

Basically a 2-team race, and this between two teams that crashed out of the Champions League.  Spurs have an outside chance (their game in hand comes today, I think), but they’ve got 4 straight tough matches on tap in the Prem.  Man U hasn’t even had a great season (by their own standards), and yet they’re still demonstrably better than 18 of the other 19 clubs in the Premier League.  Liverpool is stuck in permanent rebuilding mode, Arsenal is looking one-dimensional, and Chelsea is playing their worst ball in years and yet STILL seems likely to eke out a CL spot.  Move south a bit to Spain:

No “basically” here, it IS a 2-team race.  A brief tangent: I don’t know what to make of the Real-Barca situation.  Both of them look vulnerable this year (relatively, of course - they’re still excellent teams).  Barca looks very ordinary at times; not just the numbers above, which show they’ve dropped points in a third of their matches, but even just from what I’ve seen in watching them.  They’re having more defensive break-downs than usual, they have injury issues, and teams have started to neutralize the triangle-passing game.  Real have looked excellent in non-classico matches, but their vulnerability to Barcelona shows how they can be beaten - keep possession of the ball in midfield, force them to chase, and let their striker(s) get behind you as long as you can press and attack their middies.

And yet … watching these Classicos, I still find myself thinking “man, these two clubs are playing on a higher level than anyone else in the world.”  The depth of talent.  The precision of attack on both sides.  The way any mistake is immediately and ruthlessly punished.  If another club gets matched up against either of these two, sometimes I think you’d pretty much have to play your best game possible and also hope you catch them on an off day.  It’s going to be very interesting to see how the CL unfolds over the next 3 rounds.

Anyway, as far as the race in Spain, you could argue that Real practically has it sewed up.  Barca could conceivably get in it if they win every match.  Valencia is playing well, and this Soldado kid is very dangerous, but they have little practical chance of clawing into second place, much less first.  And below them … well, I went to high school with a kid named “Levante.”  I think he has as much chance of winning La Liga this year as the club with the same name.

We sail across the Mediterranean to check out Italy:

Slightly more compelling here, as none of these four could be completely ruled out, and because Juventus has an outside chance to go undefeated.  Still, this race isn’t really as tight as it looks - Juve has a game in hand, and if they win that, we’re looking at a 7 point lead over Udinese and 9 points over Lazio.  With AC Milan now losing Zlatan for 3 matches and Udinese about to take up Europa League play, I’d say the odds for Juve raising the Scudetto are much better than even.

I don’t think you could say that about any single team in the Bundesliga right now.  In fact, let’s take a look, team-by-team:

- Excellent defending, led by Hummels.  Now that Neven Subotic is back, they have both strength and depth at the CB position (I can’t think of a better backup CB than Santana).

- Lewandoski has been incredible, and looks like one of the most dangerous forwards in the world right now.

- They appear to have a great locker-room dynamic and are playing unselfishly and with a lot of unity.

- They’ve been able to get my without Götze for a while, but he’ll be out until at least March and possibly longer.  That has to catch up with them after a while.

- Subotic is being investigated over a sexual assault allegation (this ought to give our resident troll plenty to work with).  Even if he isn’t actually arrested or jailed, it could be a distraction.

- They need a little variety as far as scoring - no one other than Lewandoski has more than 6 goals in the Bundesliga.

- Their 46 goals are second in the league, only one behind Bayern’s total of 47.

- Huntelaar is red-hot right now, with 16 goals in the league, and Raúl is still dangerous with 10.

- Their December loss in the Pokal could be a blessing in disguise, as they have a much less cramped schedule and more time to dedicate to each BL match.

- I give all the credit in the world to Raúl, but it’s risky to rely so heavily on a guy who’s pushing 35 in your title charge.

- Best defensive record in the league, having allowed only 12 goals in 20 matches.  They’ve allowed more than one goal just once all year (a 2-2 draw vs. Levekusen).

- The imminent departure of Reus hasn’t seemed to spoil chemistry, and he appears dedicated to the club for the next 5 months.

- Undefeated at home, where they’ve made Borussia-Park a fortress (7 wins, 3 draws, a + 14 goal differential).

- Relying heavily on a lot of very young guys, which can go south in a hurry.

- I’m taking nothing away from the Foals, who I actually kind of like … but, they have been riding their luck for several of their wins.

- Probably have the most talent, top to bottom, if we can put it all together.

- When we’re clicking on all cylinders, we can make it practically impossible to take away all of our weapons at once.

- Still have the best goal differential in the league, the most goals, probably the best forwards.

- I don’t want to make excuses, but a few of our losses have been unlucky (that strange goal in the opening week vs. ‘Gladbach, Götze getting a lucky bounce in the BVB match).

- We still have a propensity to sometimes make catastrophically stupid decisions at the worst possible times.

- (related to above) Our defense will play tough and stout for 87 minutes of every game, but when we screw it up, we REALLY screw it up.

- Haven’t figured out an answer to other teams’ “park the bus” mentality against us … which is a problem, because that’s what most teams try to do.

- Too static, not enough flexibility, not enough willingness to get creative and try something different.  Why not swap Ribery and Robben for a game if other teams have caught on to the inside cut?  Why not give Olic a start, just for a game?  Is Gomez really that emotionally fragile that he’d lose all confidence from being asked to sit a single match?

- Müller and Schweinsteiger actually looked better this past week, but Thomas still needs to find the net.

So, there you have it.  If you’re like me, you’d prefer to watch Die Roten win every match by a 4-0 margin.  But, that’s not what we’re looking at now.  This is a live-wire title race right now, and a club that looks on top of the world might crash several spaces down in the table with a single loss.  So, let’s enjoy it as football fans, and recognize that Premier League, Serie A, and La Liga supporters are going to be coming over around March, when their title races are already settled and ours is still heating up.

I’m sorry I had to delete the last comment thread.  I know there were a lot of relevant and well-crafted thoughts there.  Basically, we’re having a software problem that prevents me from deleting single comments, and it’s going to be fixed this week by either uploading a new Disqus version, or by deleting and re-installing it.  Once we do that, I’ll be able to delete comments immediately and ban trolls permanently.  In the (hopefully short) intervening time, please just ignore them.

As always, feel free to e-mail me at bayern.offside@yahoo.com (note that’s “offside” without an “s”).  Back tomorrow with a preview of the Pokal match.  Thanks for reading.