In Match Week 20 of the 2011-2012 Bundesliga season. FC Bayern sits atop the table only through goal differential, as Dortmund and Schalke match our 40 points and ‘Gladbach sits only one point behind. Last week’s 2-0 victory over VfL Wolfsburg preserved our spot in first place, but the club looked very lackluster for long stretches. HSV, meanwhile, sits in the middle of the table, but will be attempting to build upon their 2-1 road victory over Hertha Berlin last week. Die Rothosen have lost only once since early October (to a good Dortmund club two weeks ago), and the Volksparkstadion can be a tough place to play, so this promises to be a genuine test for Bayern.

Absences abound for Bayern.  Rafinha will miss the match after picking up another yellow card last week.  Contento remains out with a broken toe.  Jerome Boateng is quoted on the club’s official site as being “unsure” of his assignment; but, personally, I’d be surprised if the call was anything other than Boateng sliding back to RB.

That, of course, leaves a hole at CB (with van Buyten still out with a broken foot).  Badstuber will start, but next to him could either be Breno, who hasn’t played a Bundesliga match in months, but who was dressed last week.  Or, it could be Gustavo, who has looked solid at CB whenever he’s been forced to play there in situations such as this.  The club site mentions Tymoschuk as a possibility, but I’m dubious on that one, at least as far as the starting line-up.

Up front, Ribery missed practice with a nagging back problem this week, and Robben was away with his wife as their third child was born.  Congratulations, Arjen, Bernadien, and the rest of the Robben family.  Both Ribery and Robben are expected to be ready to go tomorrow, but we’ll update if anything changes.

Then, there’s the Olic question - he looked very energetic off the bench last week, and you figure Heynckes would like to get him a chance to play in front of his old crowd.  But would he risk ruining Gomez’s confidence?  Hmmm …

My best guess for a line-up: 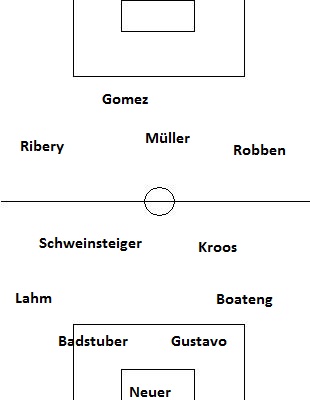 That’s right, I’m going to go out on a limb and predict the Bastian-Kroos midfield that fans have been calling for over the past few weeks.  I don’t think this is a permanent thing, I just figure that Gustavo is solid enough to move to the back until Rafinha returns.  First subs off the bench would be Tymoschuk and Olic, with Breno getting his feet wet over the last 15 minutes if we’re leading.  Just my guess.

We hammered HSV 5-0 last time we played them (in the third week of the season).  But they’ve righted the ship since then, fixing some of their defensive inadequacies and ripping off an impressive undefeated streak that lasted from early October into the winter break.  Their 5-1 defeat at the hands of Dortmund was troublesome for Hamburger fans - they were completely dominated, and the final could have been even worse.  But last week’s victory over Hertha might have restored some confidence, and they’ll definitely have their tails up for tomorrow’s game.

ESPN’s GameCast seems to peg Hamburg for a standard 4-4-2.  The last time I saw them play, I thought José Paolo Guerrero was their definite lead striker, and they ran something more like a 4-5-1 or even a 4-4-1-1 behind him.  Either way, Guerrero, Mladen Petric, and Marcell Jansen are there most dangerous forwards.  Gokhan Töre, that fast Turkish kid, really impressed me when we played HSV in the preseason Liga Total! Cup, but he has yet to find the net at all this season and is sidelined with a knee injury anyway.

Last season, HSV had a substantial home-field advantage, picking up 26 points at home, with a +5 goal differential, and only 19 on the road to go with a -11 differential.  This season, though, that has yet to materialize.  They actually have a somewhat better record away from home, and didn’t give their home fans much of a treat two weeks ago with that afore-mentioned thrashing at the hands of BVB.  So, we don’t want to feel over-confident, but this isn’t exactly a “walking into the lion’s den” situation … at least by the numbers.

- This is the last Bundesliga match of the day tomorrow - 12:30 PM Eastern here in the USA.  Even our West Coast brethren can get up in time.  It will be broadcast live on Gol! TV in North America.

- Meteorologists are calling for a clear but cold day tomorrow: 24 degrees Fahrenheit (about negative 10 centigrade).  Let’s see those gloves, gentlemen.

- We’ll have the Match Day chat-an-go box up before the game time, hopefully with a few minutes to spare.  Last week, Seth reminded me with just a couple minute before game time (though, to be fair, it was like 9 AM on a Saturday and I was hung over).  I’ll try to get it up in plenty of time tomorrow, so everyone can check in.

- Lastly, Hamburg is one of the clubs that has an active blog on The Offside.  Mark and Ryan are smart kids who know their stuff, and they have several loyal readers.  If they show up here, either during the match or afterwards, try to be welcoming as long as they’re being respectful and humane.  If anyone else comes in just to troll and start trouble, simply ignore them.  Thanks for reading.