The Round of 16 is finally upon us. So far this season, Bayern has oscillated from between "fairly sharp" and "rather poor," with the post-winter-break performances tending dangerously towards the latter. But all that can be erased with a run of good performances in the Champions League. Bayern gets star billing, with our first tie taking place on the last day of Round of 16 matches (along with some other small clubs whose names aren’t important enough to bother looking up). This first leg is away, and we’d be in excellent shape if we can bag a pair of goals tomorrow … no easy task, considering some of our recent offensive struggles.

No official word from the team web-site yet, but Fox Soccer quotes Heynckes as praising David Alaba, and their article says that he’ll be on in the midfield.  The real question is up front, where (1) Arjen Robben might be returned to the starting line-up, after looking like Bayern’s most threatening offensive player in last week’s 0-0 draw vs. Freiburg, and (2) if Robben does come on, then does Müller or Toni Kroos make way?

Another concern is the defensive half of our midfield pairing: does Tymoschuk come on for?  Just when we seem to have this worked out, Jupp Heynckes confuses us again with another switch. 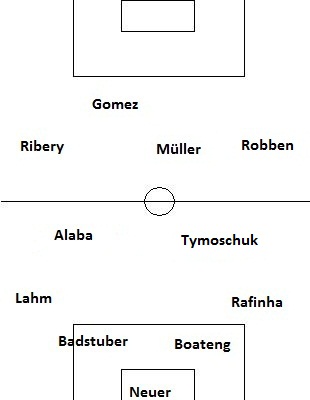 I know this is a strange guess, given that Heynckes loves Kroos so much.  Just a hunch.  I’ll have the real line-up tomorrow as soon as it’s announced, along with our Match Day Chat Box and any other last-minute updates.

Despite maybe possessing a little less firepower than some other clubs left at this stage, Basel doesn’t appear to be a “sit back and play all defense” type of club.  During the Man U match, they fought hard in the middle of the pitch and kept attacking even with a 1-0 lead.  They also lead the Swiss Super League with 40 goals scored so far this season after only 20 matches.  Granted, there’s surely a lower level of defending, but still - they won’t be afraid to take a few chances.

Tactically, Basel appears to favor a 4-4-2 (or an alternating 4-4-1-1) with Alexander Frei and Marco Streller up front.  On either wing - IE, on either side of the midfield “4” - they have someone who can threaten a fullback: Shaqiri on the one side and Fabian Frei (no relation to Alex) on the other.  If one or both of these two gets a chance to push forward, they can create havoc with overlapping runs and/or by springing the one of the strikers into the middle of the pitch.  This is a definite concern, given the inconsistent play of our fullbacks in recent weeks.  At the same time, bringing the wings forward will open up some spaces in the back, so I expect Basel to attempt anything like this only very judiciously.

Also - the same Fox Soccer article says that Scott Chipperfield and Philipp Degen are missing in action for Basel.  I don’t think I’ve ever heard of Degen, but Chipperfield is a regular rotation guy who plays a few midfield positions, and who got some action in most of Basel’s Group Stage games.  So hopefully his absence helps us to create some chances (also hoping he’s not badly/career-threatening hurt, obviously).

Elsewhere in the Champions League

- Napoli’s counter-attacking game is looking as deadly as ever - they controlled the ball for only 42 percent of the match today, yet produced 15 shots, 3 goals (could have been more without a pair of nice saves from Cech), drew 18 fouls, and basically ripped Chelsea’s defense apart.

- Arsenal is in trouble, and AC Milan looks dangerous.  Honestly, from what I saw, that was more a case of Milan playing really well than Arsenal playing especially poorly.

- My prediction that Real Madrid would have no trouble with CSKA was obviously way off base … though, to be fair, they pretty much controlled the whole game today and will still be considered heavy favorites on the return leg with a 1-1 draw.

- Zenit St. Pete surprised me with a pretty inspired display, and they stand a good chance to move on, but a single goal in Lisbon would give Benfica the edge, as they did grab 2 away goals in last week’s 3-2 loss.

- I’m really, really excited for this one.  I took the second half of the day off work tomorrow.  I know the club hasn’t been playing especially well lately, but we can wipe out a lot of that misery with an early goal (or two?) tomorrow.  Also, this is my first CL knock-out stage match since taking over the blog - I started the day after the Inter loss last year.

- This is weird … Basel manager Heiko Vogel supposedly put his players through a practice in which they all had to wear an eye-patch over one eye.  I think this was mostly an attempt to lighten the mood a bit.  Either way, the most important part of the article: Bayern have managed just two wins in their last five games since the winter break.  And the club‘s sporting director Christian Nerlinger admits: “The alarm bells are ringing.”

- If anyone is in DC and wants to meet up to watch, e-mail me at bayern.offside@yahoo.com, or just leave a comment below.  Thanks for reading.