In Match Week 22 of the 2011-2012 Bundesliga season. The 1. Bundesliga table is still somewhat cramped at the top, with 4 clubs separated by only 5 points. FC Bayern sits 2 points back of leaders Borussia Dortmund, and last week’s encouraging 2-0 victory over Kaisterslautern gave ample reason for optimism. But a single slip-up puts Bayern in danger, especially with a very tough stretch looming ahead.

Bayern hasn’t been great on the road this season, and continued absences due to injury limit our effectiveness at several positions. Nonetheless, this is a match we have to be expected to win comfortably. With Dortmund and ‘Gladbach both playing relatively weak clubs, this is probably shaping up to be a "run as fast as you can just to stay in place situation."

Diego Contento has returned to running and drills, but he’s definitely not an option.  Bastian Schweinsteiger, Breno and Daniel van Buyten are also long-term absences.  The club site doesn’t give us an official line-up yet, but it does contain loads of effusive praise for David Alaba from Jupp Heynckes and others: “He's done a magnificent job … He's gone through a process of maturing and he's changed the way he plays. He's a lot calmer on the ball now.”  Etc, etc.

Unless this is all a huge head-fake, we’ll probably start off with the same line-up as last week, with Alaba at the CM spot vacated by Bastian’s ankle injury.  That would leave us looking something like this: 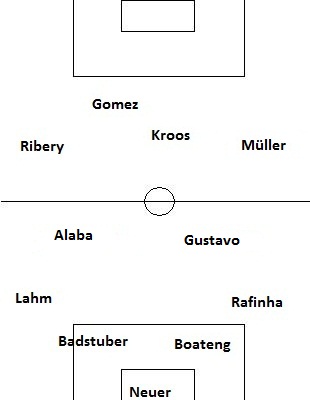 The only alternatives would be Robben in at RW (with Müller starting on the bench, or Müller moving to second striker and Kroos taking a seat) and Tymoschuk replacing Gustavo next to Alaba.  Regardless of the starting XI, those two (Tymoschuk and Robben) would be the most likely subs.

Speaking of Robben, Müller spoke up this week to defend the Flying Dutchman: “The claims that he is too selfish are simply wrong.  One of his main assets is his outstanding dribble, and the fact is that dribbling is something you do individually.”  I wouldn’t rule out the possibility that Robben gets a start, given Heynckes penchant for surprising us with last-minute changes, but it’s more likely that we’ll keep the same line-up that worked well for us last week.

SC Freiburg are in big trouble at the moment, sitting at the foot of the table and having allowed a league-worst 47 goals against.  Their best player, Papiss Demba Cissé, was sold over the winter transfer season, and no one else on their roster has more than 3 goals in the Bundesliga.  So if you can find someone willing to bet on the Freis, I’d go ahead and take them up on it.  But, their home form is not awful (3 wins, 3 draws and 5 losses, a respectable -2 goal differential).  And last week, they went on the road vs. Wolfsburg and were level at 2 apiece at the half.  The eventually lost the match 3-2, but one of VfL’s goals was possibly offside, and Freiburg didn’t look bad for most of the match.

Among their more recognizable players is Erik Jendrisek, the Slovakian forward that played with Kaiserslautern and Schalke in the past.  He lines up on the left side up top, and has the quickness to get behind Rafinha if we find ourselves pushing forward too far.

In our previous meeting vs. SC, we took them apart 7-0.  After an early goal by Gomez, Freiburg pushed forward looking for an equalizer, and we opened them up on the counter pretty effectively.  So if we can get another early goal tomorrow, we should (hopefully) be able to pressure them in a similar fashion.  But if they hold us early and we get frustrated, anything can happen.

Elsewhere in the 1. Bundesliga

As mentioned, both of the other clubs near the summit have very winnable games: Dortmund on the road vs. the imploding Hertha Berlin, and Monchengladbach on the road against Kaisterlsautern.  The Dortmund match is on ESPN 3 and ESPN Deportes tomorrow, along with Schalke 04 vs. Wolfsburg (an interesting encounter) on Sunday morning.

Right now, Hoffenheim and Mainz just finished off a 1-1 draw.  Neither club is in the top half of the table, but Mainz can use the point, as the now move further away from relegation danger.

If I’m wrong about this, I’d love to be corrected.  If this is accurate, though, come back here tomorrow morning for our Match Day Chat Box and we can hopefully provide guidance.

- Looks like the temperatures are giving our boys a bit of a break - they’re calling for 38 degrees Fahrenheit at kick-off tomorrow (about 3 degrees centigrade).  Not comfortable, but a definite improvement.

- After this match, CL ball starts up this week, then a huge battle with Schalke next week.  So the club has to put all of that out of their minds and focus on Freiburg for now - dropping points tomorrow would be a catastrophe, and you know Freiburg wouldn’t mind holding out for a draw.