Share All sharing options for: Forward, the Light Brigade!

As we briefly discussed yesterday - with the Pokal draw having taken place, FC Bayern’s schedule is set for the near future. And the schedule for the men in red is not an easy one. Beginning this weekend (Feb. 18), Bayern will play 9 matches in the span of 36 days - 5 of them on the road, and almost all of them against clubs who would at least be considered moderately threatening. Let’s take a closer look at this heavy, heavy chunk of scheduling.

Freiburg is really the only club on the list that you might possibly label an easy win.  They sit at the bottom of the 1. Bundesliga table, they have the worst goal differential in the league, and they’ve lost outright in 12 of their 21 matches.

But I’m still not ready to think we can win this one just by showing up.  In our second-half trip to Freiburg last year, we were basically held to a stand-still, and only won thanks to an excellent (and a little lucky) long strike from Ribery.  At the beginning of a tough stretch, it can be useful to play a weaker opponent, because a convincing win can give you confidence and let you work out some of the problems.  At the same time, a loss here would be ruinous, considering what follows. 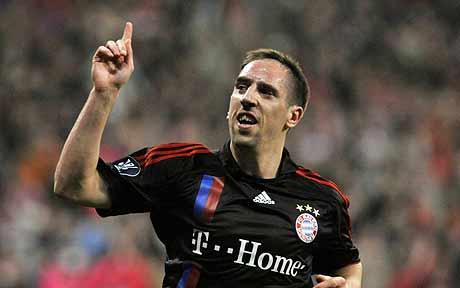 Champions League play returns, with a tricky visit to Switzerland.  Basel is certainly a more favorable draw than some of the other clubs we could have been matched with (such as AC Milan).  But these guys can’t be taken lightly.  They knocked Manchester United out of the competition, and currently sit at the top of the Swiss table by a wide margin.

Basel are led by Alexander Frei and future Bayern wing Xhedran Shaqiri.  But they can hurt you from several positions.  Former Stuttgart and Köln forward Marco Streller doesn’t get the same publicity as Frei and Shaqiri, but he has 10 goals in the Swiss league this season and had a huge strike against Man U.  Midfield play will be huge here - if we allow Basel to consistently win balls and feed their forwards, they definitely have a chance.

Die Blau und Weiss looked rather weak in losing to Monchengladbach yesterday, but they still represent a real danger.  Their only intervening Bundesliga match is vs. Wolfsburg, so I expect them to still be pressuring the other members of the top 4 by the time this one rolls around.  Huntelaar has been on fire of late, and Schalke hasn’t lost to a club outside of that top 4 group since October 15.

One fortunate point here is that they play Viktoria Plzen on February 23, a day later than our mid-week match.  We’ll see how much stock Schalke puts in that Europa League match; my guess is, they’ll give the kids some playing time and preserve some of their usual starters for the Bayern match.

They haven’t been as sharp this season in domestic play, but a trip to the BayArena is never easy.  They lost on their recent trip to Dortmund, but defended well and allowed only a single goal.

Incidentally, Ballack was held out of the entire game, and looks set to miss the Barcelona match this week with an unspecific “muscle problem.”  This despite the fact that several sources said he was a healthy scratch vs. Dortmund.  Not sure what’s going on up the street in Leverkusen, but if Ballack and Sidney Sam are both back by the time our match rolls around, this is a dangerous opponent.

Perhaps a slight let-up here, as Hoffenheim isn’t super-threatening and Bayern’s home form has generally been good recently.  But this is what they’d call a “trap” game in NFL football - a seemingly easier match settled between two difficult ones.  Hoffenheim can make you work (tied for 4th-best defense in the Bundesliga, with only 25 goals allowed in 21 games) and they have no mid-week play to bother them.  We, only the other hand, will surely be counting on a win here, and then have only 3 days before …

In my uninformed opinion, this is the first match where we could possibly have Bastian back in the mix.  The second-leg home matches are tricky, because (depending on what happened in the first leg) every goal you allow could be even more important than usual.  Hopefully we’ll come into this one with a lead - if we don’t manage to put 2 goals on the board in Basel, this could be a nervy finish.

This particular spot in the schedule will conjure up some harrowing memories for those who were watching last year.  We’ll find out what we’ve learned.

Really packing them in here - a road match on 4 days rest after a huge match on 3 days rest.  Hertha is an opponent we should beat, but you know Kraft and Ottl will be prepared for this one.  And they might be on the edges of the relegation fight, so I’m concerned about Hertha turtling up and playing for a draw.

One positive is that, this same weekend, ‘Gladbach and Dortmund have somewhat tough opponents (‘Gladbach on the road to play Leverkusen, Dortmund at home vs. Werder Bremen).  So if we get a win here, it MIGHT be a chance to make up some ground … or create some space, depending on how things look at of this point.

Needless to say, Borussia-Park has been a tough place for us recently.  The Foals are an excellent team, and they looked deadly yesterday vs. Schalke 04.  No one know how either club will come into the match (so much could happen in the next 4 weeks), but I have a feeling both clubs have this one circled on their calendars.

We wanted to go for the treble, though - this is the kind of match you need to win if you’re going to do it.  If Bastian isn’t back by this point, we have a big hill to climb.

Another short week - 3 days between the huge trip to Monchengladbach and this one.  Hannover is a solid club that has a few good wins this season (they beat both us and Bortmund in the first half), but they’re not great on the road and might be dealing with Europa League scheduling themselves.

On that nore, they take on Brugge this Thursday and again in mid-week next week.  A win there is excellent for Germany’s coefficient, and might also keep H96 alive in Europe long enough to burn them out for their match vs. us, so I’ll be tuning in.

So there you have it.  A lot of huge games crammed into a short time frame.  And if we keep winning, the subsequent 4 weeks would look just as tough.  We’ll be here covering it the whole time, so check in every day and stay tuned to the twitter feed at http://twitter.com/bayern_offside.  As always, e-mail us at bayern.offside@yahoo.com if we missed anything or you have further thoughts to add.

If you just come for football news and analysis, and don’t care about the blog-meta stuff, feel free to stop reading here.  And, good decision by you.

So, as you may have noticed, we pulled the Disqus plug-in and went back to the standard Wordpress commenting system.  This was a tough decision, because I know a lot of people had Disqus accounts across multiple sites, but for whatever reason we couldn’t get the moderating and editing controls to work.

For the next week or so, you might notice spam posts as I assemble my list of banned IP addresses and e-mail tags.  In a week or two, though, that should be cleaned up and we should hopefully be more acclimated to this new system.  If you have an especially relevant or poignant comment you want to make, you can always e-mail me and I can put it into the body of a post itself - or, if you really have a lot to say, write to me and maybe I’ll let you do a guest spot.  Thanks for your patience, I hope we don’t lose any of our regulars over this.