In Match Week 21 of the 2012-2012 Bundesliga season. FC Bayern looked much livelier in Wednesday’s 2-0 win over Stuttgart in the DFB Pokal. But we still sit 2 points behind Borussia Dortmund in the Bundesliga table, and haven’t looked very convincing in any of our 3 Bundesliga matches since the winter restart. A great chance for Bayern to start our spring charge, especially with some of the other contenders facing tough opponents (more on this in a minute).

With Bastian Schweinsteiger nursing torn ankle tendons, Jupp Heynckes has a few tough decisions to make.  His main options are either to move Toni Kroos back into the CDM spot, bringing Müller back from the wing and Robben off the bench; or to leave the front 4 the same way we played in the Stuttgart match and cobble together a midfield from Alaba, Gustavo, and Tymoschuk.

As of now, the club’s official site gives no indication of the outcome.  A few other sources have waded into the discussion, though.  NDTV says that “Heynckes is most likely to slot Anatoliy Tymoshchuk in for Schweinsteiger alongside Brazil's Luiz Gustavo at the back of the midfield.”  Hmmm … I don’t know how likely that is, but I wouldn’t rule it out.  SB Nation likes Gustavo + Kroos in the midfield, with Robben getting back into the starting XI.  ESPN Soccernet’s preview predicts that “David Alaba and not Robben should take Schweinsteiger’s place.”  So, basically, everyone sounds sure of their choice, but they’re all saying something different.

I’m going to predict we go move Kroos back to the CDM spot, at least for this weekend, just because we’ll want to avoid totally burning bridges with Robben.  But for subsequent matches, I wouldn’t be shocked to see Alaba in there - and man, he looked great on Wednesday. 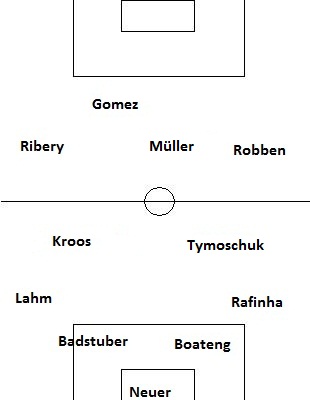 I always get these wrong, so go ahead and bet on Robben sitting on the bench if you can get odds.

UPDATE - the club just released the starting midfield for tomorrow - Alaba will play alongside Gustavo.  So I was wrong on both counts.  Alaba - Goose in midfield, not Kroos - Tymo.  This would seemingly render Robben a substitute again, although this wasn't explicitly confirmed by Jupp Heynckes. If so, this was the same squad we used against Stuttgart (after Bastian went down) that played very well.

Thanks to Havde for keeping his eyes peeled.

I'm trying to program this UPDATE text to come up in red.  If this works ... man, a whole new world for us, am I right?

Last year, Kaiserslautern was a newly-promoted club that made some noise - beating Werder Bremen twice, BMG twice, and Bayern once, and finishing a respectable 7th in the table.  But this year, they sit only a point off the bottom spot, and have scored the fewest goals of any 1. Bundesliga club (15 in 20 matches).  In league play, none of their players has found the net more than 3 times.

This won’t be a walk in the park, though, as K’slautern plays tough defense.  Their 24 goals allowed is better than the league average, and they’ve allowed more than 2 in a match only once (vs. us, back in August).  In last week’s 1-0 loss to Köln, Kaisterslautern went down to 10 men but still fought hard, and might claim to be a little unlucky they didn’t earn a 0-0 draw.  Florian Dick, Alexander Bugera, and Rodnei Francisco de Lima anchor the back line.  They also appear to commit a greater-than-usual number of fouls, and won’t hesitate to cynically bring down a dribbler if it appears he might get a chance on goal.  So Bayern will need to stay disciplined and cycle the ball offensively, and avoid getting caught on the counter if we start pushing men forward.

An exciting weekend in the most exciting league in Europe.  Monchengladbach and Schalke face each other in a huge battle in Borussia Park (where the Foals have been almost unstoppable).  If Schalke can somehow get a win on the road in this one, they are in the title discussion for the rest of the season.

Dortmund, meanwhile, is home to a Leverkusen club that has had all week to rest and is started to get healthy at the right time.  That one is on Gol! TV, while ours is on ESPN Deportes in North America.

With all 3 of our closest rivals facing tough opponents, and 2 of them playing each other, Bayern has a chance to make a big move here.  But if we blow it, some serious questions have to be asked.

- There is an “extreme low temperature/wind” advisory in effect, with the thermometer expected to be well below freezing at kick-off.  They’re calling for a possibility of snow in Munich tonight, but it should be clear tomorrow - just really cold.

- Lastly, I appreciate everyone’s efforts in ignoring our troll infestation.  I know it seems like we’re doing nothing while these idiots trash the site, but we’ve actually been working very hard on the tech angle.  We should have a new comment moderating system in place shortly - I thought it would be done by today, but it looks like it won’t.  Soon, though, trolls and spammers will be banned.  In the mean time, just continue to ignore them.  Thanks for reading.