UEFA Champions League Round of 16 Preview

Share All sharing options for: UEFA Champions League Round of 16 Preview

The month of February brings the return of Champions League ball, with the first leg of the Round of 16 ties beginning two weeks from yesterday. In anticipation, I thought it would be useful to broadly sketch out the lay of the land, and take a few guesses as to who might advance. Please note: this post does not even approach the Bayern - Basel tie (which I’ll take up separately) and is not meant as an all-encompassing guide to the Champions League. I just want to lay a marker down so we have a post to refer back to as CL play progresses. 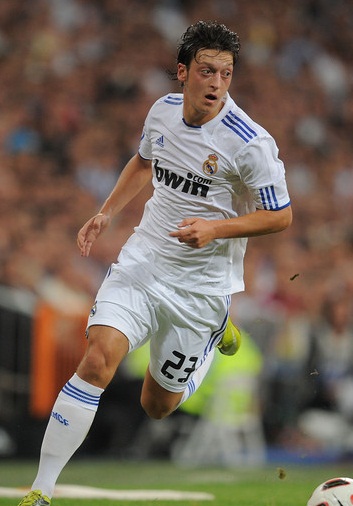 I'll spare you the suspense - he's not going home early

Leverkusen has played well so far in this Champions League campaign.  They began with a 2-0 loss Chelsea, but they played well in that match and didn’t get run off the pitch or anything (they were even level at half-time).  Leverkusen then followed that up by winning 3 of their next 5 in the Group Stage, including a gutty come-back win over Chelsea in the BayArena.

Looking at it objectively, this is probably too tall a hill for B04 to climb.  Barcelona are the defending champs for a reason, and they usually manage to turn it on for big games.  Nonetheless, I’m not convinced this is a 100% sure thing.  Barca looked very ordinary in their recent goalless draw vs. Villarreal.  The David Villa absence hurts them, at least as far as depth, and the first leg of the CL tie comes right before a Liga match vs. Valencia (who are ranked third domestically).  If you want to beat Barca, you need to have a midfield that’s both skilled and deep.  Well, with Stefan Kießling, Ballack, Augusto, and Sidney Sam - assuming those last two return from their current injury troubles in time - they seem to fit the bill.

APOEL’s run through the qualifying stages, play-in round, and Group State was a feel-good story.  And their wins over Shakhtar and Porto show they’re not a complete non-entity.  But, to be honest, they probably don’t have the firepower to hang with Lyon.  Despite the decision to sell Miralem Pjanic (a move I will NEVER understand) and a moderately disappointing domestic season (currently in 4th, eight points off the pace set by PSG), Lyon has a defense that will probably be able to keep APOEL under wraps, especially with Lloris in goal.  If Gourcuff and Lisandro López can turn up the pressure and get an early goal, this one could be over after the first leg, which will be held at the Stade de Gerland.

This one is on at the same time as the B04-Barca match, meaning it will be one of the two Round of 16 ties that doesn’t get a lot of attention, along with …

Although this one is similarly not likely to produce the eventual club champion of Europe, it provides a much more interesting study for a one-time match-up.  I know rather little about the Portuguese game, but looking at SL Benfica’s roster, they have a few names that leap out: Belgian midfielder Axel Witsel, Brazilian defender Luisão, and Uruguayan utility man Maxi Pereira (who scored against the Netherlands in the 2010 World Cup.  Can you believe we’ll soon be approaching 2 years since that?).  They’re undefeated in domestic play so far this season, sitting in first place with 14 wins, 3 draws, and a 5 point cushion over second-place Porto.

Zenit is one of the best Russian sides, and won the UEFA Cup - precursor to the Europa League - a few years ago.  Their defense is solid, with Bruno Alves and Domenico Criscito anchoring the back line.  I guess I should say “seems like it would be solid,” because I honestly haven’t seen them play much.  But, they have a formidable home field advantage (would you want to travel to St. Pete in February?) and have fought their way to the quarterfinals before.  If I were a betting man, I’d have my eye on a scoreless draw in the first leg.

God, how could anyone not f-king love Champions League football?  Sometimes I have to restrain myself from grabbing my friends by the ear and dragging them out to the bar to watch.  Arsenal is stinging from yesterday’s news that Jack Wilshere suffered an injury set-back.  They’ve been on a poor run of form in the Prem.  Still, van Persie has been a nightmare for defenses all year.  Their offense always generates chances, and they’ve only been shut-out once since the end of November.  It’s also worth noting that the first leg of this tie comes between a Premier League match vs. Sunderland and an FA Cup match vs. either Sunderland (again) or Middlesbrough - two very winnable games that might allow Wenger more line-up flexibility

AC Milan has injury problems of their own, as Pato will probably miss the first leg, and perhaps both.  Zlatan has always been known for fizzling out in Champions League play … but, of course, a reputation like that needs only one game to reverse.  The most compelling part of the match-up is Arsenal’s offense trying to get past Milan’s DMs and defenders (van Bommel, Nesta, Philippe Mexes … Kevin-Prince Boateng is apparently injured for reasons we need not get into now).  Anyway, this one is going to be fun.  First round is at the San Siro.

If you’re club’s name isn’t “FC Barcelona,” you appear to stand little chance against Real these days.  Other than various Classicos, Madrid has won every match since a 0-0 draw to Racing Santander back in September.

Yes, you read correctly.  Real Madrid has not lost or drawn a match against a non-Barca opponent in any competition in over 4 months.  This run spans 24 matches in all, including several Champions League matches where they didn’t even HAVE to win and let the kids have some playing time.  In half of these 24, they’ve scored at least 4 goals, and they’ve scored at least 6 on 4 different occasions.  Ouch.

I’m not going to bother looking up who CSKA has.  Sorry if that offends.  We’ll see you in the quarterfinals, Mesut.

Another delicious Italy vs. England match.  Before these past few months, I never even knew much about Napoli other than the fact that my sister visited there a few years ago and - let’s put it mildly - was unimpressed.  But I have to admit, their club looked very energetic in the Group Stage this year.  Cavani is a monster, and they seem to show up for big games.

Chelsea is stuck in the nether-region between the last charge of the old guard (Terry, Cech, Ashley Cole, Drogba, Lamps) and the new dawn (David Luiz, Juan Mata, Daniel Sturridge, Oriol Romeu).  With Terry and Lampard nursing injuries and Drogba on international duty, the club has been relying on the youngsters domestically, but I have a hunch we’ll see some of the familiar faces by the time the Round of 16 comes along.

I’ll preview this one individually, obviously.

You have to admit, none of the Italian clubs are getting a free ride into the quarterfinals.  Marseille has enough talent to make you sweat, and they thumped Dortmund twice in Group Stage play.  Among their most important players is Mathieu Valbuena, who has 4 goals and 11 assists in 15 Ligue 1 matches so far.  They’ve also won 7 straight outright, and they catch Inter at a rather easy stage of domestic play.

We all know Inter.  I guess they haven’t had the greatest year in Serie A play, but they’d probably still be considered the favorites to advance to the quarterfinals.  There could be 3 Italian clubs in the final 8, or there could just as easily be none.

So, just a broad preview of what lies ahead in the world’s greatest team sporting competition.  There’s always at least one surprise at this stage, so they say.  Let me know if I forget anything, or if you have any insider knowledge that we’d benefit from.

One more note: please don’t respond to the comment-section trolls.  Even if you agree with them about a particular issue - such as the fact that I suck - you just encourage them by interacting with them.  I’ll delete profane comments as needed tonight or tomorrow.  Right now, I’m headed out to catch a bit of QPR-Aston Villa, amid rumors of a Diji Cissé appearance.  Thanks for reading.