With yesterday's emphatic win, FC Bayern wrapped up the Group Stage campaign with a first-place finish. Despite a pair of worrying stumbles, 4 decisive wins and 15 goals scored in 6 matches is a pretty solid result. With the campaign over, we decided to dig a little deeper and break down some numbers. Interested? Read on ...

Share All sharing options for: Statistical Analysis: FC Bayern Hitting on All Cylinders

Some numbers follow from the CL Group Stage as a whole. All stats are from Who Scored, a great website for football fans - check it out when you have the time.

So, Bayern is 2d-best out of 32 teams in maintaining possession (OK, fine, level with Man U in 2d). Not bad. But how exactly are we doing it? Is one guy sitting on the ball, or are we actually managing to string together good pass after good pass? Well, let's look at passing accuracy:

Again, Barca at the top and Bayern and Man U right behind them. Passing accuracy is not the only stat that matters, but it's one of the most important. Not only are strings of good passes usually necessary to create chances, but knowing that the other team can successfully move the ball puts constant pressure on the opposing defense. With high passing accuracy numbers, you're more likely to be getting the better chances and less likely to give the opponent any chance to build anything.

OK, but even then, the opponent will sometimes win the ball, or force a 50/50. What happens when there's a loose ball, or a high kick that could be recovered by either team? Who's winning those aerial battles?

Pretty solid. We're winning balls in the air, we're maintaining possession, and we're not turning it over with bad passes. But what are we doing with it? Are we actually creating shots on goal, or just worthlessly passing it around?

So, we're also in the top 5 as far as shots taken per match. In the top 3 would be even better, but 16 shots per is a pretty solid clip. Even if only half of those are actually on target shots, there's no way any opponent was going to keep us our of the net entirely (and, indeed, we didn't get clean-sheeted once).

So - with all of these great numbers, Bayern must have a few big stars leading the way, right? I mean, we're in the top 5 in all 4 of these categories. No other team (not even Barca) is even in the top 5 in 3. We'd probably expect to have at least 2 or 3 guys in the overall Best XI of the Group Stage, right?

Who Scored's Overall Best XI of the Group Stage 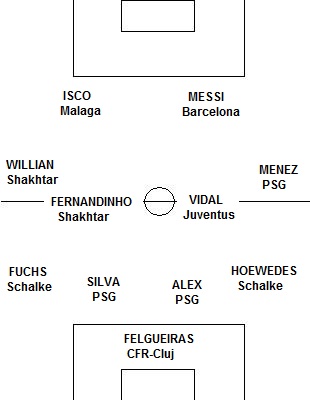 None. Not a single spot. At first, it's easy to think this is more evidence of pro-Barca, pro-English, etc, coverage. But if you think about it, this is actually probably fair. Throughout the whole Group Stage campaign, FC Bayern has been getting contributions from everyone. Who has our star striker been? Gomez looked good yesterday, but Mandzukic played great as well, and Pizarro had a hat trick. None of them did enough (or had enough opportunities) to be picked for a Best XI, but all of them have been getting the job done. Midfield? Bastian has been OK, but not great by his own high standards. But Tymoschuk and Javi Martinez have been picking up the slack. Tymo has the kind of gritty, hard-nosed skill set that won't win you a spot on any Best XI lists, but will make life miserable for opposing middies.

And it's even more striking along the back line. Dante and Lahm both played very well, but didn't even start every match. Rafinha, van Buyten, and Boateng all looked good in limited minutes. Hell, even Contento - who hadn't played meaningful CL minutes in ... ever? ... made a huge defensive play yesterday, sprinting across the pitch to knock away a BATE pass a prevent a 1-on-1 chance.

In the end, I think this will end up being a huge strength. No matter how great a team is, if they're waiting on one guy to pull out a bit of magic, their opponents always have a plan: shut down that guy, and make them go to Plan B. Well, Bayern already has a Plan B, along with Plans C and D. We have multiple guys who can score, multiple guys who can make dangerous dribble-runs, multiple guys who can tackle and win loose balls. At first glance, the Best XI doesn't seem to reflect any excellence on Bayern's part. But, when you consider that we won first place in our group, scored 15 goals, and were in the top 5 in possession, passing, aerial balls won, and shots, the fact that we did so without having any single guy who would be picked for the Best XI is very encouraging.

Back with more tomorrow. Big grudge match this weekend vs. Augsburg ... in the sense that I personally have a big grudge against them. So we'll have a preview of that and a look ahead. Thanks for reading.