Some Noisy Neighbors of our Own

Perhaps "neighbors" might be a bit of a stretch - the cities are about 600 km apart, and pretty much at opposite corners of Germany. Nonetheless, the Bundesliga now has a genuinely heated rivalry. And while it may be good news for German football, it's proven distinctly harmful to the blood pressure of Bayern supporters.

Share All sharing options for: Some Noisy Neighbors of our Own

We're now 2 days away from the next chapter in a sporting rivalry that's quietly becoming one of the best in the world. In one corner, Germany's famous record champions. And in the other, an emerging power that's finally starting to get some notice around the world.

I guess the best thing that many Bayern supporters could say about Der Ballspielverein Borussia 09 e.v. Dortmund is that it makes us sort of proud of German football how much we hate them. Thirty months ago ago, when FC Bayern won a domestic double and made a run to the Champions League final, it was the culmination of a rather prolonged period of dominance for Die Roten. We went through a run of 9 German titles in 14 years, with a three-peat, 7 cup titles, and a couple of Champions League final appearances (and one win) included. And just as importantly, during that period, each of the 5 non-Bayern league winners was different. Any of several clubs might make a challenge in a given year, but no one could sustain a long period of being able to both challenge us for the title and beat us head to head.

At the end of the 2010-2011 season, when Dortmund won the domestic title, it was hard for Bayern supporters to really get angry at them (or their fans). That year was a complete train wreck for Bayern, with manager Louis van Gaal leaving under acrimonious circumstances, a nasty crash-out in the Champions League, and locker room discord rearing up several times. If Bayern fans were angry at anyone, it might be Inter Milan, who beat us for the second straight year in any ugly match. I can only speak for myself, but as far as the Bundesliga, my attitude was basically "we stunk so bad, someone had to win it. Congratulations."

But last year felt a lot different. FC Bayern actually played pretty damn well for most of the season - increased our win and points totals significantly, and we even came within one match of equaling the Bundesliga record for fewest goals allowed. But again, it wasn't enough, as Dortmund won back-to-back titles (the first time any non-Bayern German side had done that since the mid 1990s). And again, they followed the same formula: avoiding losing at home; getting goals, assists, and clutch plays from many different guys; and, most importantly, always beating Bayern head-to-head.

Which brings us to the part that really sticks in Bayern's craw: 5 straight losses at the hands of Dortmund, each more infuriating than the last (I exclude our win in the German Super-Pokal this summer, which really isn't a meaningful match). Last April, when Bayern was clawing our way back to relevance after a winter swoon, we had a huge match in the Signal-Iduna Park that ended thusly:

I think this was the point at which many Bayern supporters went from "grudging respect" to "God, do I hate these bastards." That's not to say that they aren't a great team or that their titles aren't deserved. Dortmund's CB duo of Mats Hummels and Neven Subotic is possibly the best in the world. Their backup CB, Felipe Santana, would probably start for just about any club in just about any league. They can hit you with a quick-strike counter-attack, or they can maintain possession with their deep midfield and grind you down. They replace any departing offensive stars (Sahin, Kagawa) with a machine-like efficiency, as new guys emerge; last year, Lewandowski was my choice for MVP of German football. And the Dortmund manager, Jürgen Klopp, has done a great job with his team.

But the more I see of them, the more irritating they get. Seriously, look at these effing clowns: 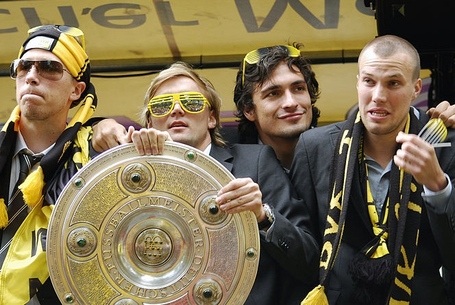 Kevin Großkreutz, on the far right, at least has the good sense to take off the "oooo, look at me, my sunglasses have HORIZONTAL PLASTIC LINES THROUGH THEM!!!" sunglasses. But not Marcel Schmelzer. He totally thinks he's hip. Yeah, just holding the Bundesliga trophy and looking out through my horizontal-plastic-lined sunglasses. Even Hummels, the ex-Bayern man, looks like a tool.

If I sound bitter, it's because I am. This will surely come across as sour grapes, but I think you could make an argument that FC Bayern was the best football club in the world last year. Yet we were left without a single trophy for the second straight season, while Dortmund neglected their Champions League campaign (winning only once out of 6) and won a German double. And bandwagon supporters from around the world flocked to them, making them the cool new team to talk about.

Now, ahead of Saturday's match, we seem to have them right where we want them: Bayern comes off back-to-back wins and maintains a big lead atop the table. And yet, we've had them "right where we want them" several times in the past couple years, but they've managed to come out on top. If we're going to slay any of our dragons this season - whether tactically or mentally, offensively or defensively, in domestic or continental play - we need an emphatic win over Dortmund, or it will always be sticking in the back of our minds.

I'll be back tomorrow with the standard pre-match preview. Just felt like it was time to (reluctantly) acknowledge Dortmund's emergence as a force, and remind anyone who didn't know that they've totally had Bayern's number. If we can beat them this weekend, it would be a big step towards winning the league title and a huge confidence boost. But either way, this rivalry doesn't appear to be going away anytime soon. Thanks for reading.