Hello, all. Sorry for my absence over the past 4 days. Things have been very hectic in the non-Bayern-related portions of my life. I come, however, bearing gifts:

FC Bayern vs. Hoffenheim. We pick it up in the 19th minute of the first half. Bayern has just won a throw in on the near (right) side of the pitch. Lahm takes the throw and attempts to find Mandzu on the short side-high: 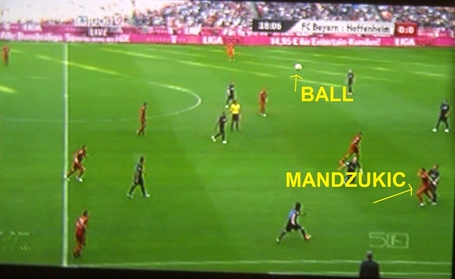 But Mandzukic can't cleanly win the header. The best he can do is shoulder off a defender, but the ball will bounce to a Hoffenheim player pretty much no matter which way it goes. You'll also notice that TSG has plenty of defenders back (marked in pink) - nine guys in the middle or back of the pitch, including the one off-camera that I've pointed out on the right: 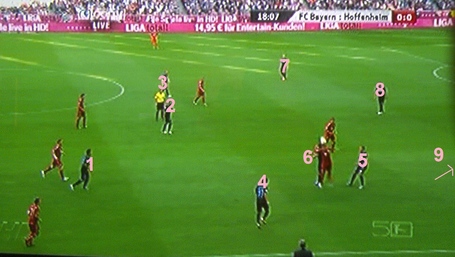 Anyway, as mentioned the ball bounces upfield to closest Hoffenheim player, who I believe might be Compper. He takes whomp at it, trying to just send it back downfield. 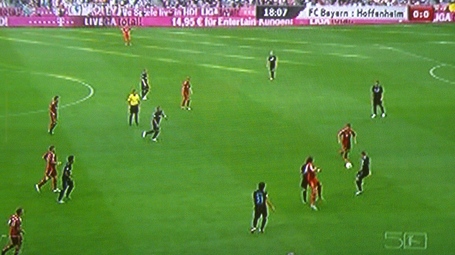 Probably a good move by him - if he'd tried to handle it, Mandzukic might have had a chance for a steal. As I pointed out, in the next shot, the ball is just outside the frame: 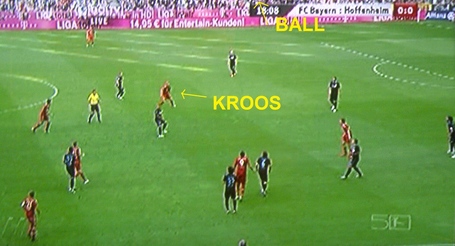 High and arching, coming down in the middle of the pitch, Kroos doesn't seem to have the inside track. He's also not that tall and not that great a jumper. So it seems like Hoffenheim will have a good chance to win the header and play the ball clear. There's only one problem for Hoffenheim ... 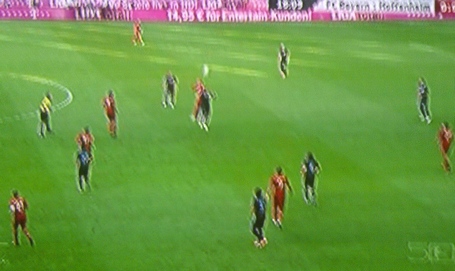 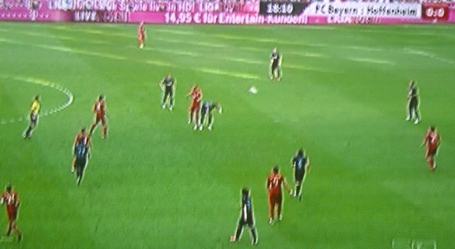 He wins the ball and ^ sends a low, accurate header to Müller, who's a little upfield and moving right-to-center. Müller stops the ball and wait for his teammates to cut through. And already, you can see the play developing: 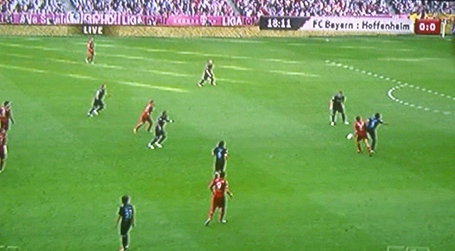 As Müller has Kroos in the near channel and Ribery on the far side. At this point, Kroos follows up his nice header with a smart play: he sprints upfield into the open space, forcing defenders to converge and mark him: 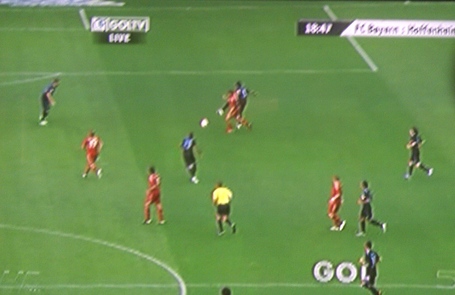 This ^ is a new angle, but the same spot in the sequence. The obvious play for Müller is to lay it off short to Kroos and give him a chance to try one of his patented edge-of-goal-box blasts. But with Kroos moving through the open space and attracting defenders, Tommy sees an even better play: 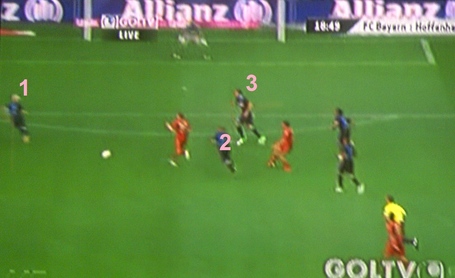 As you can see, three defenders are focused on Kroos (either ready to steal a pass to him, or ready to take away his chance at a shot if he corrals the ball). But wait a minute, who's that on the far left side?

It's Franck Ribery, at full speed, with plenty of room on the edge and with only one man in front of him. As Shaquille O'Neal would say "that's like a barbecue chicken dinner to me." 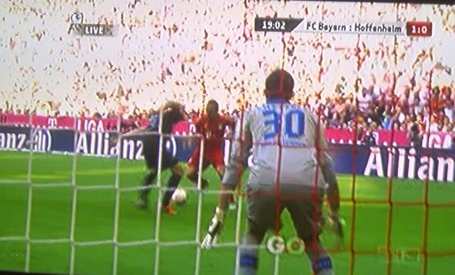 Ribery with a quick head fake, then pulls it back to the right where he has plenty of room to load up a hard, accurate shot. And you guys know me, I'm a sucker for the blurry ball-crossing-line shot: 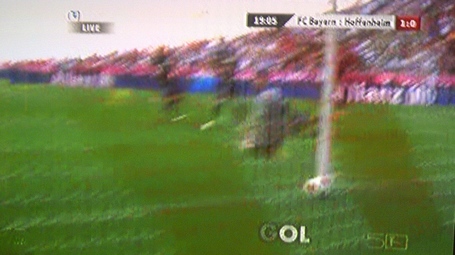 Müller gets the assist and Franck gets the goal. Toni Kroos, however, makes it happen. He makes two plays that will never show up in the stat-box: the perfectly-timed header to win the ball in the middle of the field, followed by the hard run through the right-middle to draw three defenders forward. No one keeps track of numbers for "great decoy run," so you won't see that in the stat-box. But that's the kind of aggressive-yet-unselfish play that leads to goals.

If you've been emailing or tweeting me over the past 3 days, I apologize for not getting back to you sooner. I'll clean out my inbox tonight. We'll be back tomorrow with a preview of Germany vs. Ireland (I think?) and a look at some other WC qualifiers and a few related points. Thanks for reading.