Evening, all. FC Bayern is nearing the end of the winter break, and boarding a plane to India tomorrow, and my numbers indicate that a lot of regular readers are still absent as well. So this is as good a time as any to clean up some of the dross, I suppose. What follows is a pretty personal post that I promised a few guys who e-mail me that I would write a while ago. Anyway, it's 4:30 AM here and I'm pretty sloshed, so feel free to just IGNORE this post and check back in 2-3 days when I post more pics or whatever. Seriously. Unless you're in the mood for drunken warbling, just turn around now.

... Anyway.  I wrote a post a few months ago describing how I first became a fan of FC Bayern, and asking everyone else to do the same.  My personal answer involved a complex back-story, but the simplified answer was basically some form of "started taking football seriously in 2006, started paying attention to club football after the World Cup that summer, starting pulling for FC Bayern because they had one of my favorite guys from the World Cup, Willy Sagnol of France."  Two or three peole later e-mailed me to ask me to expand upon that, and to talk about why I liked Willy Sagnol so much ... and I guess it took me these e-mails to really think about it, and determine that I wasn't sure.

I guess part of it is from having a background of NFL-gridiron-football fandom.  If you know people who watch the NFL, you'd know that people get further "away from the ball" the more they get into the game.  That is to say, if you talk to someone who just starting to watch the NFL, his favorite player is almost certainly a quarterback or a halfback - someone who touches the ball on every play.  It's not until you watch the game for several weeks, or even several years, that you understand how important are the guys who DON'T usually touch the ball - the offensive lineman, the LBs, and the DBs. Well, this was what I saw in Willy Sagnol - a guy who could affect the game without hardly ever touching the ball.  An opponent's player - a good player, a fast and dangerous wing or striker - could work his way down the flank, and Willy could shut him down without ever having to kick the ball.  A guy like Brazil's Adriano would try to get open to receive a pass, and Willy would just blanket him.  He wouldn't even have to dash in and steal the ball - he just kept the possible ball-path in front of him, always juuuuust close enough to slither and tap a pass away if it came, and the opponent's play-maker would think "hell, I'm not going to risk passing it over to where Willy is." 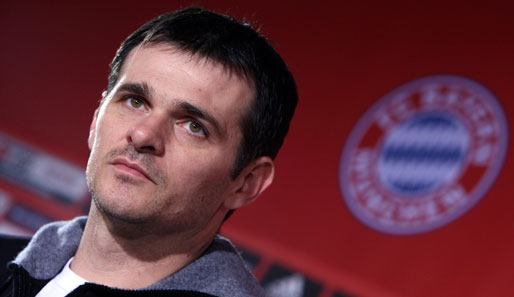 But, of course, Willy Sagnol didn't invent blanket coverage.  A ton of guys have been known for playing good defense without having to kick the ball.  So it must have been something more specific than that.  So I guess part of why I liked him so much is that he employed such a perfect economy of motion.  Willy would be running backwards, and tracking a guy who was charging downfield - a guy who was younger, faster, bigger, and seemed to always be within a half-second of blowing by him and getting open.  Only the guy just never QUITE managed to do it. It seemed like Willy could somehow mark a guy even though he moved his body only half as much.  An opponent would crank up to full speed, like a locomotive, and then switch directions with a profound SCREEEECH - slamming on the brakes, cutting the inside, waving his hand up to show his teammate, "hey, pass it over here!"  But he wouldn't be able to get any room.  Willy would be right there with him, even if it seemed like he was always moving less.  He would swivel his hips a few degrees one way, and then a couple degrees back the other way - and without hardly ever even moving his body, he would somehow stake out a whole 15-yard area of pitch.  Whatever ground it took an opposing forward 3 or 4 second and 6 steps to cover, Willy would just seem to control without even planting a foot - just by keeping his hips and mid-section twitching back and forth.

If you want an analogue, the best I could offer is Darrell Green of the Washington Redskins.  He was one of the best cornerbacks in the NFL for over a decade.  Although he was a fast guy, you never watched him on the field and said, "wow - that dude is fast!"  It was more the kind of thing where he was just sort of "there" - without ever making an obviously brilliant play, he would manage to take away the opponent's best player and remove him from the game plan.  That's what I was reminded of when I watched Willy Sagnol - Darrell Green shutting down a fast, cocky young WR.  Making the guy get frustrated.  Throwing him off his game.

But, of course, Willy Sagnol didn't invent shutting down fast skill players either.  So there had to be something else that drew me to him.  I suppose it was probably that he had a very continental depth to him - a degree of personality that we're not used to seeing over here (I don't think I have any French readers, so I feel comfortable saying this).  He had a very French way of telling you so much, without even meaning to.  There was always something very deep to Willy Sagnol, something very reminiscent of a person you've known for years, but who was still keeping some strange secret.

In the States, a common cliche is to say a guy is "the kind of guy you'd want to have a beer with" - but Willy seemed to be more than that.  Watching him play had a way of leaving you ... not so much knowing about him, as much as knowing that you knew a PART of him very well.  He had an incredible range of personality in his face and in his attitude.  Even in the moments of greatest triumph (such as after the France vs. Portgual win - to send them to the World Cup final) there was always touch of profound mortality behind the joy - something of the 30-year-old athlete realizing that, no matter how great he played, this was probably the last World Cup he'd ever play in.

This is something that we don't get here in the USA.  Over here, our athletes have only 3 settings: jubilant after a win, sad and anguished after a loss, and sitting on top of a pile of money and scowling in the off-season.  I guess, in a way that was bigger than Willy Sagnol, this is what drew me to football - an all-consuming obsession with putting the ball in exactly the right place in the next 4 seconds, but yet somehow combined with a knowledge that this game will be here in 100 years, regardless of what you do, long after your bones have turned to dust.

Anyway, there are a few guys that hit me in this same spot - sort of behind the cheek-bones, but in front of the point where your brain-stem meets your spinal cord, if you can follow what I mean.  But Willy Sagnol was probably the first guy to do it in exactly that way, and I followed him back up the river to Munich.  And I've been here ever since.

But, like I said, I'm pretty drunk.  Back with something more sensible tomorrow. Thanks for reading.