Share All sharing options for: Pictures from Camp, Plus Various News Items

FC Bayern continues to train hard in Doha, Qatar, with Bastian Schweinsteiger slowly trying to work his was back to 100% fitness. Bastian describes himself as "still a bit heavy-legged" - apparently, the collar-bone is fine, it’s just a question of getting himself and his body back to match speed. He also promises that he’ll feature in next week’s friendly in Delhi: "I am returning from an injury, so the India match is crucial to see how I have recovered ahead of a hectic second phase of the season."

In other news, Bastian’s advice that Bayern pass on Marco Reus was apparently not shared by Ribery and Badstuber, with both expressing disappointment that the 22-year old middie didn’t make the move to Munchen.  Franck says, “It's a real shame. I would have preferred it had he decided to join Bayern,” and Holger says “The player has made his decision and will have good reasons for it. We can only respect his decision. It's a shame though as he is a young German player and would have fitted in very well at Bayern.”

In my opinion, it might have been fun to pick up Reus, but I wouldn’t call it a “shame” that he went to Dortmund instead.  Assuming Bastian comes back fully fit, and assuming Kroos continues to show the form he’s been demonstrating, we don’t need much cover in the middle portion of the field.  Reus can play on the wing, as well, so we definitely could have used him as a replacement for Robben, who has trouble staying healthy and will need a rest occasionally even if he’s not hurt.  But you can’t blame Marco for not wanting to come here and be primarily a back-up.  Between Ribery, Robben, Kroos and Müller, we already have 4 guys for 3 spots.  Anyway, he’s not leaving ‘Gladbach until the summer, so we get to see him in two weeks.  Maybe the boys can show him what he’ll be missing.

Elsewhere, Arjen Robben is eager to sign a new deal.  In fact, he sounds pretty confident of it: “It will be done soon. When a contract is set to expire, the team will not wait until the last year.”  Alright, then.  Guess there’s nothing left to discuss.  Get the checkbook, Uli.  Mario Gomez also wants a new deal, although the goal.com is light on specifics here - they basically just quote him as saying he feels happy at the club.

Some pictures - a training session in Qatar: 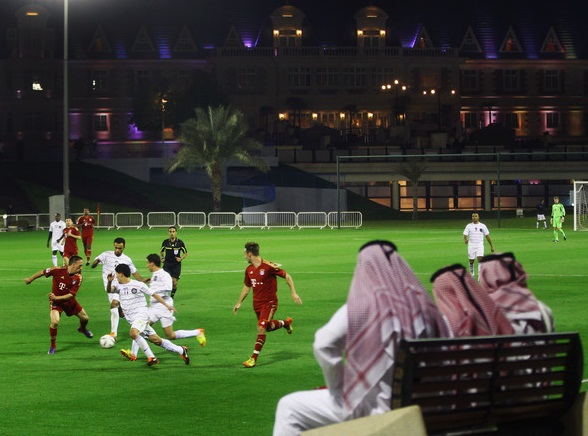 Getting ready for the morning session - love the flip-flops, Bads: 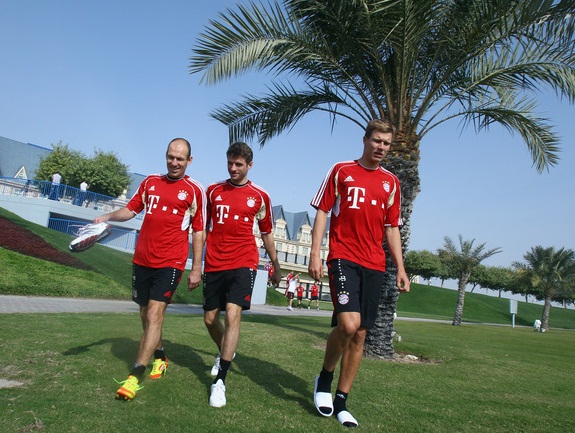 Is Holger really that tall? Must be the angle.

We’ll be back with more tomorrow or over the weekend.  Thanks for reading.