Well, the Build-Up was Perfect - A Play in Ten Acts

Share All sharing options for: Well, the Build-Up was Perfect - A Play in Ten Acts

Our patented stop-motion photo analysis usually breaks down plays wherein FC Bayern looked especially good or especially bad. When trying to highlight an example of "looked especially good," it’s natural to choose a sequence in which Bayern finds the net. We did one of those back in early December. Sometimes, though, Bayern’s players will make a series of smart, efficient, high energy plays that work so well that we just have to break down the sequence, even if the whole thing was blown by a clownishly awful finish.

Pick it up in the 19th minute.  FC Bayern has just sent in a high cross from the near/left/Ribery side across to the far/right/Robben side.  As you’ll see, the ball cleared everyone and is bouncing towards the end line (the ball is highlighted in yellow, just because it was hard to see against the background): 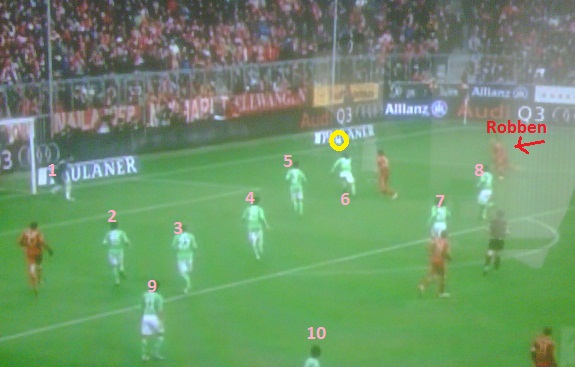 A few things ^ you might notice.  First, sorry about the glare. F--king plasma.  Second, VfL is definitely pulled back into a defensive shell, with all of their defenders and middies back in the area.  All told, they have 10 players, counting the ‘keeper, in this frame, which really only entails the last ¼ of the pitch.  I’ve marked them in pink.

Third, the ball appears to be in a rather unfavorable position for Bayern.  It’s close to bouncing out of bounds, which would mean a goal kick to Wolfsburg and kill the chance.  Even if it stays in, there are so many defenders around it, with the closest looking like a better bet to reach it than the closest Bayern player (which is Robben, whom I’ve marked im die rot).  Finally, even if Robben gets there, it’s going to be hard for him to do much - he’d be sprinting towards the end-line, so it’s not like he can control the ball, get his body quickly turned around, shield the ball from being stolen or poked away, and then look back up-field to find a teammate. 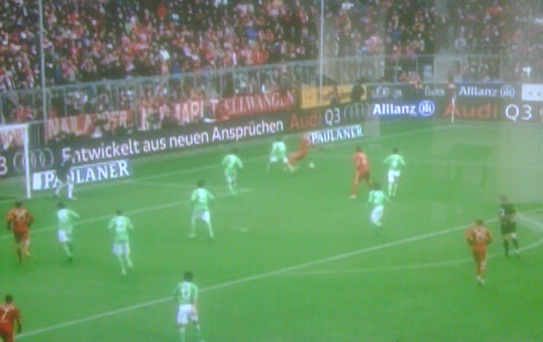 Very, very nice play from the Flying Dutchman.  Between photos 1 and 2, literally no more than a third of a second passed.  He beats the defender to the ball, saves it from bouncing out for a goal kick, and then: 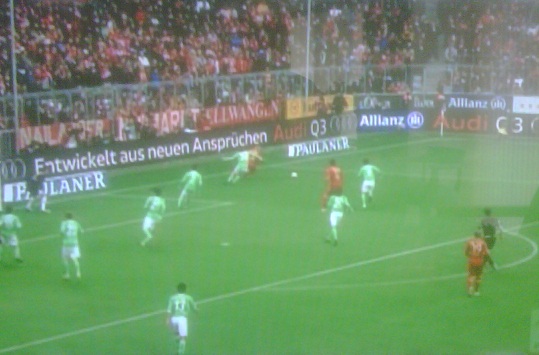 even manages to swivel his body to ward off the defender with his hip as he looks for somewhere to go with it.  He takes one rhythm dribble and waits for both nearby defenders to close in on him: 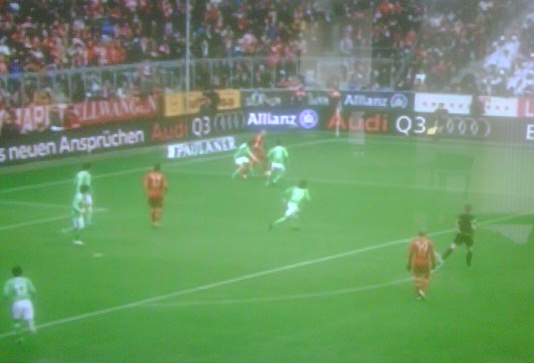 At this ^ point, the defense is slouching towards the corner flag.  Even the VfL midfielders are cheating down towards the end line, which Arjen quickly sees and exploits with a pass back up to his fullback: 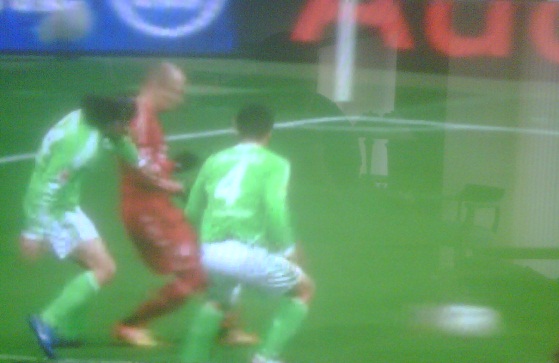 Note ^ Schäfer (number 4 in green) - even though Robben is in an immediately harmless position, down in the corner, he’s threatening enough on the ball that Schäfer has to come double on him, breaking up the formation of the defense.  Robben’s pass perfectly finds Rafinha waiting on the right flank, just outside the box: 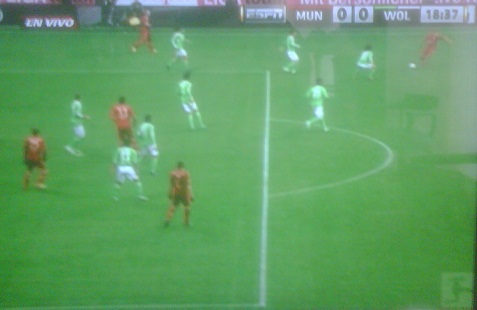 Raf meets the ball and has to make a decision immediately, before the defense can recover.  He’s tempted to float in a lob right here, to try to find one of our 3 guys in the box.  He resists this temptation, though because (a) even though Wolfsburg is somewhat stretched, they still have 4 guys right there, and (b) Müller is helpfully standing flat-footed in an offside position.  Instead, Rafinha does something even better: he slides the ball back towards the middle in front of the oncoming Schweinsteiger: 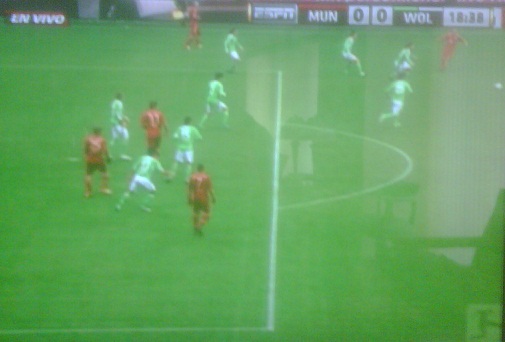 This solves both of the problems highlighted in the previous frame.  It allows Müller to start to work his way back onside, and it forces the VfL defenders to break down and shift (because Schweinsteiger is a legitimate threat to blast a shot or make a threatening run from this central position).  Bastian flies into the frame and sends in a lob: 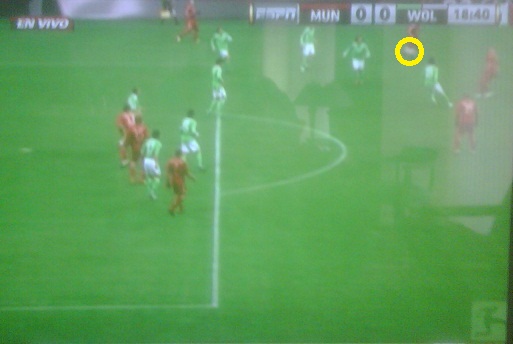 I’ve highlighted the ball in yellow, because it was hard to see against Rafinha’s feet/socks.  As you can see, both forwards are now legitimately onside, and the defenders are no longer able to hang onto them, because Bastian’s coming in on a charging run (and also probably because of Kroos’ presence there on the near side).  As for the quality of the lob: 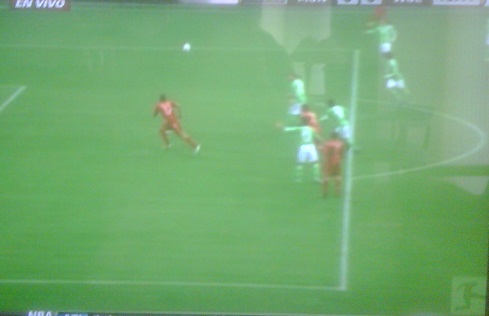 Well, there’s a reason our offense suffered so much when Bastian was out.  Mario runs through the ball, perfectly set up in a 1-on-1 with the ‘keeper.  Everyone hold your breath, here comes the finish: 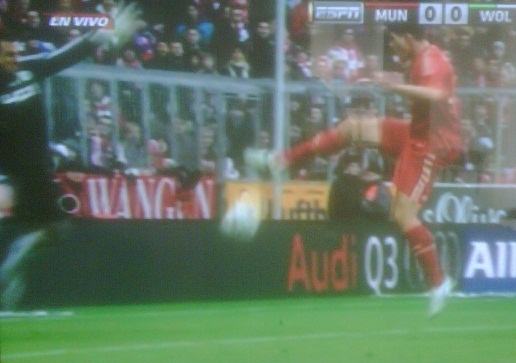 Whiff!  We still love you, Mario, you f--king oaf.

Back with more later this week.  The current transfer window is closing without any reinforcements (probably), but it appears Xherdan Shaqiri is a great bet to join us over the summer.  Thanks for reading.