The Very, Very High Line - A Play in Seven Acts

Share All sharing options for: The Very, Very High Line - A Play in Seven Acts

Not really in the mood for a cute/funny/wacky introduction. We know the drill - a break-down of photographic footage from the previous match, with a particular emphasis on something that FC Bayern did particularly well or particularly poorly.

Any guess as to which today’s episode will be?

Pick it up in the 40th minute.  Borussia Monchengladbach leads 1-0, with Bayern having controlled possession but failed to carve out many good chances in the preceding 15 minutes.  Tymoschuk controls a pass just on the far (offensive) side of the pitch, with the pieces set up thusly: 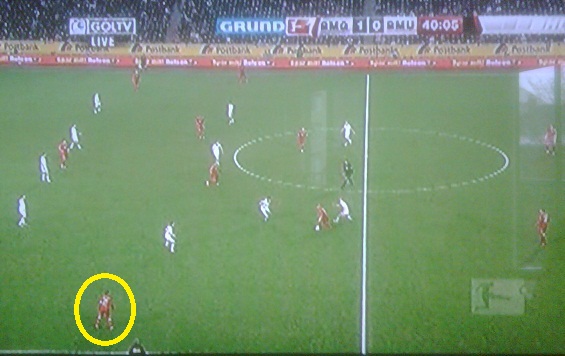 Lahm is ^ marked by the yellow circle.  As a fullback, he has a complex role in this situation - down a goal, you’d like to get your fullbacks involved in the offense, even if it means assuming some risk.  At the same time, you don’t want to leave your flanks exposed.  So Lahm (and Boateng, on the other side) is trying to make himself useful or threatening in the direction of the ‘Gladbach goal, while at the same time remaining in a position where he can get back to shut down a counter-attack.  Moving forward one click: 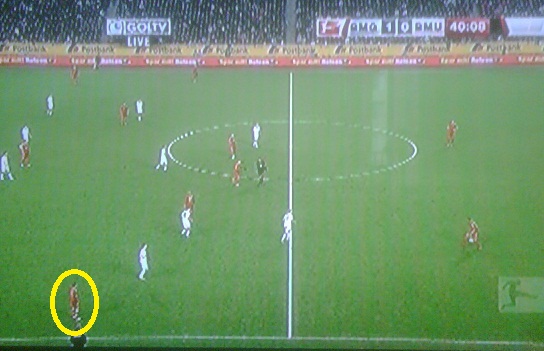 Tymo has passed the ball backwards, now looking to swing it wide to one side or the other.  Lahm pretty much remains where he is; he’s still straddling the line between defense and offense.  Scroll forward 3 more seconds: 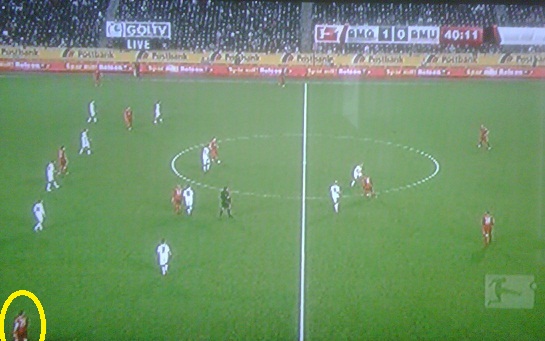 A key development.  As the ball swings from left to right (IE, towards the Robben side), Lahm is trickling into an offensive position.  Compare the 2nd picture with the 3rd - by the time the 3rd shot is snapped, he’s nearly equal to the defensive quartet.  His shoulder is also turned upfield, in a position where it would clearly be easier to run towards the ‘Gladbach end than it would be to turn around and sprint back to the Neuer’s goal.  One more second forward: 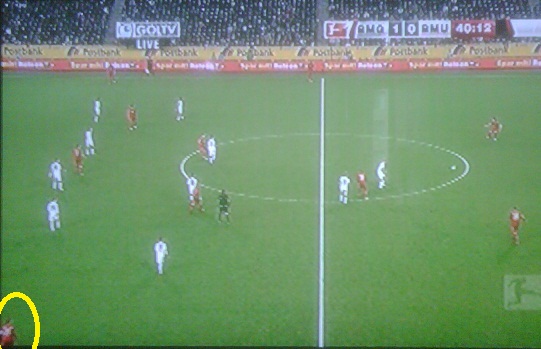 Lahm clearly wants to carve into that open space in front of him - he’s keeping himself just short of running offside.  In fact, if van Buyten would have tried to slam the ball upfield into the front left corner, we might have had a chance there.  So you can’t entirely blame Philipp for wanting to occupy that space (especially as we really needed a goal at this point).  Daniel didn’t want to take the risk, or possible didn’t even see the opportunity; either way, he knocked it forward to Robben, who promptly had it stolen.  We pick it up there: 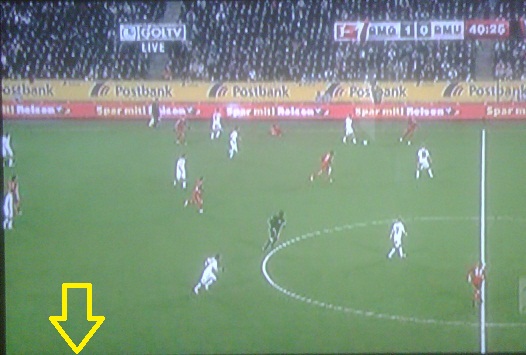 Monchengladbach just starting the break.  I’ve indicated Lahm’s latitude with the yellow arrow, as he’s just outside the picture.  At this point, he’s in a full sprint back to the defensive side.  But let’s be honest - even the fastest player in the world can’t get back from the far offensive corner to break up a pass in the defensive zone in less than 2 seconds.  In fact, he ends up making pretty good time - he gets back into the picture here: 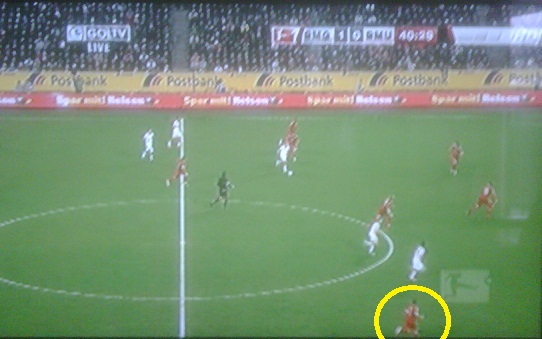 But still not good enough to stop the Foals’ break-away.  And the rest, as they say: 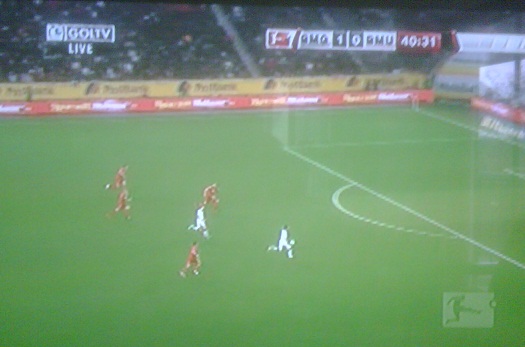 We can’t know for sure who’s to blame for the goal without being in the locker room.  It’s possible that Lahm is free-lancing, and he decided to slide into a very offensive position on his own.  If so, you can see why that’s generally not a good idea.  But it’s also possible that Heynckes wanted both fullbacks to slip forward, to try to overlap with the wings and/or find space to create a shot.  If that’s the case, the CBs need to understand this and be ready to assume more responsibility.  If the team is losing, and surging forward looking for a goal, you’d rather see ONE of your two CBs as the designated “last line of defense” - instead, we get both Badstuber and van Buyten easing to within 5 yards of the midfield stripe.  As soon as Robben loses the ball (a story in its own right), you have a foot-race between Badstuber, Daniel van Buyten, and two of Monchengladbach’s fastest players.  That’s a foot-race that we lose ten times out of ten.

More tomorrow or Wednesday.  Please keep it clean in the comments.