Back on the horse in Bayern-land, as the long Bundesliga winter break is over. FC Bayern travels to Monchengladbach to take on the Foals tomorrow afternoon. The match is an 8:30 PM start local time (2:30 PM Eastern here in the USA), and will be broadcast live in North American on Gol! TV.

[Some updates made, based on reader corrections. See below.]

A quick look at the table will leave little doubt as to the importance of the clash. Bayern occupies the top spot, with 37 points at the midway mark. ‘Gladbach sits in 4th place, but only 4 points behind us - any kind of result for the Foals would put them in great position for the second half, as well as increasing their lead over Werder Bremen for that last Champions League spot. So, there’s no time to ease back into the schedule - Die Roten must be in good form from the opening whistle.

Bastian Schweinsteiger make his long-awaited return from a broken collar-bone, while Frank “Fists of Fury” Ribery is still suspended.  So, the line-up will probably look something like this: 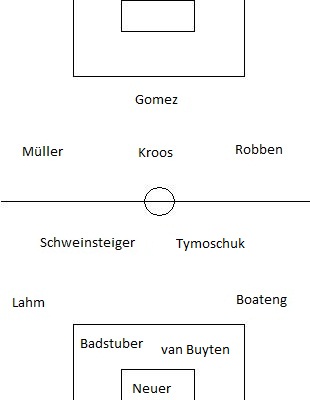 [Revised ^ line-up.  Just FYI, I didn't see any quotes from Heynckes saying that Tymo was going to start, but if everyone else agrees, maybe I missed something.]

Only wild-card possibilities are Tymoschuk at CM, and van Buyten at CB with Rafinha coming off.  But my hope is that, with everyone rested and healthy, Rafinha will get the nod at RB.  Olic looked very good in all of the friendlies over the winter break, especially in the second half of this match vs. SC Al-Sailiya:

(Thanks to Maz for the forward).

This probably isn’t enough to force his way into the starting line-up, but he should be the first guy off the bench if we need a spark.  At least until Berbatov arrives.

Borussia Monchengladbach was one of two clubs to beat us at the Allianz in BL play during the first hald (Dortmund being the other).  Marco Reus has agreed to the BVB move at the end of the year, but is still lining up with ‘Gladbach for the next 6 months.  And, if Bild is correct, Marco is looking forward to it:

“I will see them for battle on the pitch … It does not bother me. In my eyes, Dortmund are the better club.  I decided this way because I feel there is more potential (in Dortmund) for playing in Europe and measuring myself against the best.”

Just shut up and play the damn game, kid.

Behind Reus, the Foals also rely on Juan Arango, the Venezuelan midfielder who leads them with 7 assists and has also notched 3 goals of his own.  In the first match-up, it was Igor de Camargo who knocked in the fluke goal to beat Bayern.  But he hasn’t done much since then, starting in only half of ‘Gladbach’s games and only scoring one additional goal.

- Robben says he’s on the verge of signing an extension, with the final signature just “a formality” (in his words).

- No further news on Jan Vertonghen - the general “Bayern is interested” rumors are still being floated, but nothing new from the past two days.

- Elsewhere in the Bundi, Dortmund is on the road vs. Hamburg SV, Leverkusen hosts Mainz, and VfB Stuttgart travels to Schalke in an interesting battle.

[The umlaut for Leverkusen has been removed, and my German education takes a step back.  I thought the umlaut meant that the "U" was pronounced with a "hard" sound, like in "Duke" ... or "lose."  Whereas a "u" with no umlaut meant that it was pronounced like "you."  But that isn't the case?  'Cause I always hear the Gol! TV guys say "Leverkooosen" (without the "yuu" sound), so that punctuation must mean something different.

Anyway - fixed, thanks for the correction.]

- Gol! TV’s coverage starts with Bundeliga magazine at 2, but it appears that ESPN 3 hasn’t got the Bayern match on the schedule yet.  They sometimes add games at the last minute, but for now, it appears it won’t be included.  If you can’t find it online, come back here tomorrow by 2 and we’ll have the Match Day Thread, then followed by a recap and video highlights afterwards.  Thanks for reading.