Die Roten in the Capital City

Share All sharing options for: Die Roten in the Capital City

[Today's guest post comes from Sid - he mentioned last week that he was going to check out the Bayern - India match, and I asked him to come back with pictures and/or a report. As you'll see, he definitely delivered.

Also - it's now Thursday, 7:30 PM my time - I'm adding some pictures from the event taken by reader RW911. Some of these are REALLY impressive photos - check them out, at the bottom of the post.]

My apologies for the late post. Got back home from the game at 4 am (stay 300 km from Delhi), managed 3 hours of sleep before I went to work.

Just a small intro about myself. I have been a Bayern fan since the 98/99 season. That was the first time I watched Bayern play in that season’s Champions league. I took to Bayern the minute I saw them play. Kahn , Effenberg , Elber , Basler were simply GOD like to watch . Loved the way they play. Was very upset when we lost that ill-fated final to SCUM UNITED (I HATE THEM).

I started following Bayern ever since that year. The Bundesliga was not shown in India. My only source was the newspaper, Magazines i could lay my hands on and certain news channels. But i made it a point to watch Bayern's UCL games whenever they were shown by ESPN or Star Sports. I cried the night Bayern won UCL 2001. My Hero Kahn was amazing. I followed Bayern with complete devotion even though the football scene in India was dominated by the English Premier League.

Coming to the game, I was very excited to finally watch Bayern from the stands. I couldn’t concentrate much the previous evening at work. My only thoughts were that am going to be watching " Robbery", Lahm, Schweni, Muller … well the whole gang. I got to the stadium 4 hours before the scheduled start.

I couldn’t get too many good pics coz I have a SUCKY SUCKY camera. 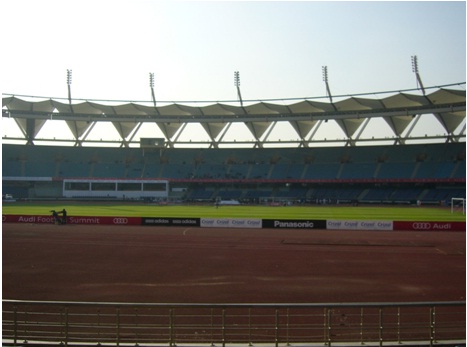 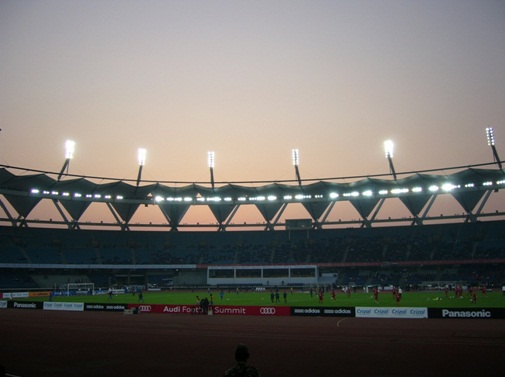 The event started off with the Bayern youth cup finals played between teams from Mumbai and Delhi. Was a pretty interesting one with both sides creating good chances and not able to convert any. The game went to penalties which Delhi won 4-3. Anyways the crowd started pouring in gradually as the Big kick off approached. India has a good Bayern fan base and I saw a lot of a lot of red shirts pour in. There were quite a few passionate supporters of the Indian national team and Baichung Bhutia . 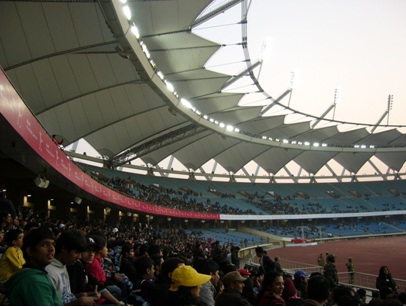 I myself was quite torn on the issue of whom to show my support. On one hand there is my beloved Bayern ( Idols , Gods ) and on the other my national team with Baichung playing for the last time in the blue jersey. Both teams got a huge roar when the players took to the pitch to warm up. I screamed my lungs out when I saw Robben , Muller , DVB and Lahm come out and do some stretches. 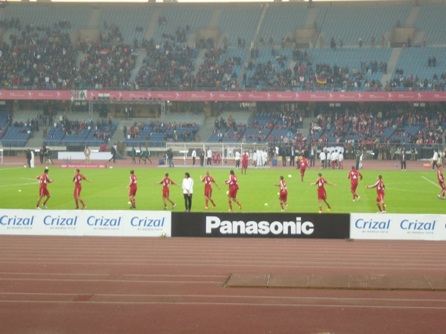 As an Indian it was quite an embarrassing first half for us. Bayern had 99 % of the posession. The Indian national team could not hold onto the ball for more than 2-3 seconds. It was complete dominance by Bayern. Gomez opened the scoring with a typical ‘Gomez’ tap in. Muellar added the 2nd and 3rd from some excellent moves. The most notable were Schweni and Kroos. They were untouchable. Kroos looks a lot like Schweni offensively. He assisted Mueller for the third. Schweni ‘s screamer made it 4-0 to Bayern at Half time. Neuer had the best seat in the stadium watching his 10 team mates play brilliantly. Quite a few of us were in fact calling out to him to join us in the stands so that we could get pics taken with him. I was quite vocal in my support for TEAM India throughout the game. But watching BAYERN, my Gods was quite magical. Of course the energy levels I felt wasn’t the same but the passing and the crosses were a pure delight to watch. Badstuber and Boateng at CB looked quite solid to me.

Bayern changed the team around in the second half.

Breno I thought played a descent game. His touches were quite good and he was strong in the air. Gutsavo was extremely clumsy and earned a yellow for a stupid tackle. Usami didn’t look impressive. His movement was bad though he did take a shot on from a tight angle. It was mostly possession football by Bayern in the second half. More training ground like.  Team India put up a more spirited performance in the 2nd half. They actually had couple of shots at the Bayern goal and put Neuer to work once.

Baichung was substituted in the 86th min to a huge applause and standing ovation. He’s like the Sachin Tendulkar (cricket GOD) of Indian Football to us. The players did a lap of honor after the game. It was a wonderful sight to see Baichung being carried around on his teammates shoulders. He’s been an Indian footballing icon for many of us and our longest serving player. He was presented a Bayern jersey with his name on it by Lahm and an AUDI by Nerlinger. Nice gesture by Bayern. 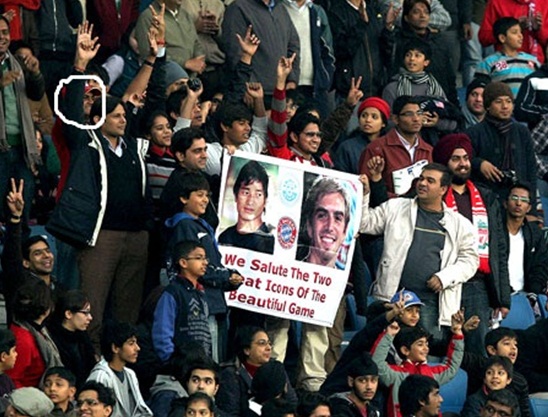 [The update - as RW told us in the comments:]

I was at the match too, traveled 1400km just to watch them play. Although I saw many, MANY others who had traveled as much or even more. I have some pics myself, I'd be glad to send them over if you still want any.
But watching Arjen Robben walk within 2 feet distance of me was surreal and I will treasure that moment for a lifetime :) [I just wanted to scream "sign a contract extension soon" to him but better sense prevailed]Schweini had a scowl throughout till the end of the first half, seemed really fired up. Tymo and Olic seemed really playful and Muller too seemed to like the atmosphere. Lahm was relaxed but never let his guard down. IMO, Lahm, Boateng Schweini, Robben, Kroos, Muller and Gomez had a fantastic match although I feel they purposely lifted their foot off the pedal in teh second half. (eg: Robben had a super easy chance of a one-on-one with the Indian GK but he seemed to purposely have headed it straight into his hands) Ribery too seemed to be enjoying himself and performed a trick or two in the second half.Alaba, Petersen and Usami seemed a better match for the Indian team as the game started to stagnate after that. Bayern players had quite a few runs in the ground (for almost 30mins, I wonder why!) before retiring for the day.All in all, a once-in-a-lifetime experience for an FC Bayern fan from India and a very good brand building exercise for the Club to gain a better footing here and in Asia. 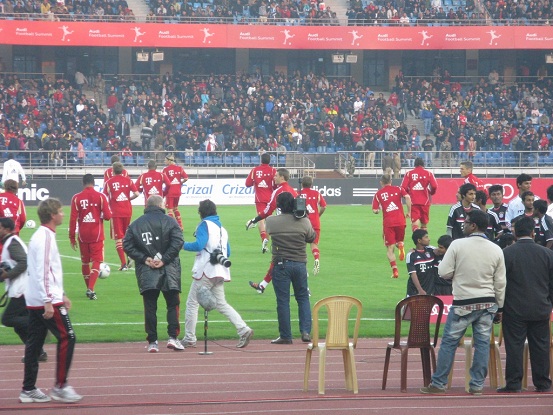 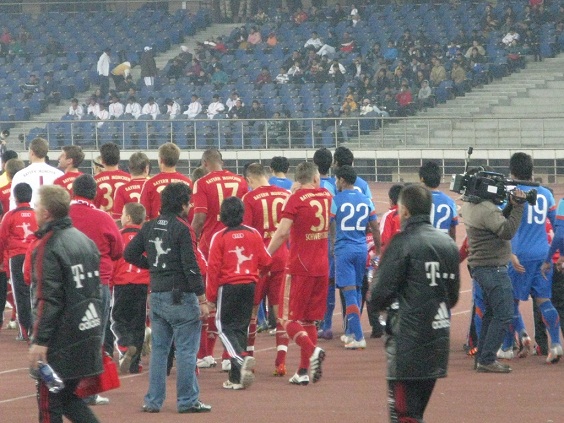 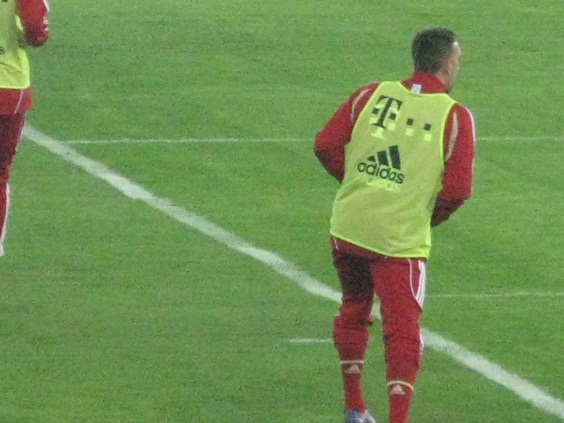 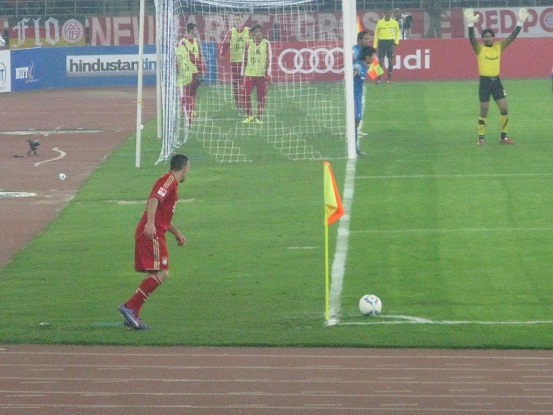 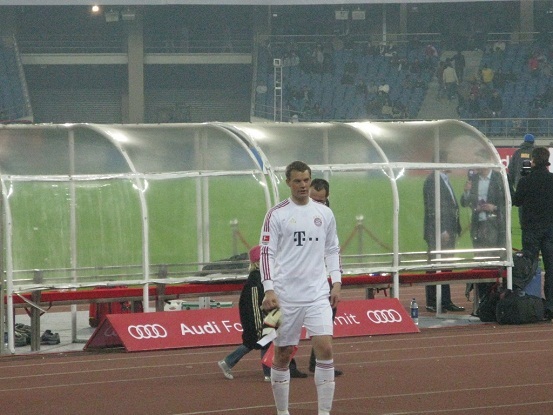 More to come later - I got a BUNCH of good pics from both of these guys, I'm approaching the space limit for a Wordpress post.