In another inter-continental friendly. FC Bayern’s most recent performance was a 2-1 win over Al-Ahly in Qatar. Though the performance was not confidence-inspiring, the players say they’ll be ready for the re-start of the Budneslgia season in a week and a half, so fans are cautioned not to panic.

Tomorrow’s friendly (today’s, I guess, by local standards) is being held to honor Baichung Bhutia, the most capped player in the history of the India national team.  Bhutia has made 107 appearances for his nation’s side, and retired from international football a few months ago - this will be his final time wearing the Blue Tigers’ kit in a competitive match.  In addition to being a prolific goal-scorer for several I-League clubs, Bhutia has carried the Indian torch around the world, playing for several years with Bury in Englan’s old First Division, and with Perak FA in the Malaysian Super League. 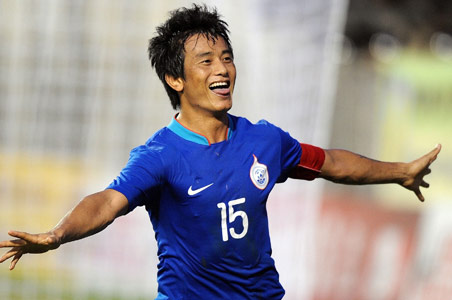 The Man of the Hour

But his exploits on the pitch tell only part of the story - Baichung is also known as an ambassador of the game and the public face of Indian football.  He’s currently a club owner and founder and chairman of a series of football academies.  Basically, he’s one of the biggest names in the world of sport throughout Asia, and Bayern players have spoken about their happiness at being able to play in his send-off game.

Mario Gomez limped off against Al-Ahly after less than 15 minutes.  Jupp Heynckes has said it wasn’t a big deal, but I still wouldn’t be surprised to see him held out of action.  Considering how well Olic looked, he might get the nod up front.  Arjen Robben also spoke extensively about being excited to take part, so he’s sure to start.

Other than that, nothing has been announced yet.  Friendlies are always hard to predict, but I’d imagine they go with a pretty standard back four (Lahm-Badstuber-Boateng-Rafinha?) but then bring in van Buyten or Contento, or both, as subs.

Several times over the past few years, India’s national team has seemed like they might be on the verge of breaking through to relevance, but they haven’t been able to maintain steady forward progress.  India missed out on the 2010 World Cup thanks to a 6-3 aggregate loss to Lebanon in the qualifiers, and then followed this up by crashing out of the Asian Cup in 2011 with three straight losses.  But, the team had a few solid outings later in the year, including friendly wins over Qatar and Malaysia, and the were in good form in earning the 2011 South Asian Football Federation Championship earlier this year, capped off with a 4-0 win over Afghanistan.

Although the afore-mentioned Baichung Bhutia is the elder statesman, Sunil Chhetri is India’s young gun - he already has 33 international goals, despite being only 27 years old.  Chhetri was the subject of a pick-up move from QPR a few years ago, but it was scuttled due to work permit restrictions.  He later spent a year with the Kansas City Wizards (now called Sporting KC) in the MLS, although his only appearances were in pre-season matches and friendlies.

At ‘keeper, India’s first choice is Karanjit Singh, who just turned 26 yesterday.  He led the club to their recent SAFF Championship with 3 clean sheets in 5 matches, although I dare say he’ll have a lot to do tomorrow.

- It’s supposed to be warm and sunny tomorrow - 60 degrees Farenheit (16 Centigrade) at kick-off.  Not too bad for Delhi.

- Thomas Müller appears to be the only current Bayern player who’s visited India before.  The other guys say he’s going to be the tour guide.

- Robben sums it up for the Indian fans: “I know you love your cricket, but for 90 minutes next week we hope to show you quality football.”  Thanks for reading.

4-0 is your final.  Bayern controlled the action and had possession for three-quarters of the time, with India managing to force a nice save from Neuer in the second half.  Gomez, Mueller (twice) and Bastian are your goal-scorers.

This clip has all the goals, I believe:

Back with more later - one of our readers was hoping to be at the game, and might have a description and/or some pics. Thanks for reading.