It’s no secret that FC Bayern’s offense has been on fire this season. Through six Bundesliga matches, the club has scored eighteen goals and hit the five-goal mark twice. Add in wins in the Pokal and Champions League, and Bayern is up to 26 goals scored to go against a single goal allowed. Sure, things will change when we play some tougher opponents, but right now I think our front half can hang with anyone in the world. And, theoretically, everything will get kicked up another degree once Robben is fully healthy.

There are clearly several reasons for our offensive prowess. Ribery has regained his form of old, and is again looking like one of the most dangerous wings in the game. Gomez, despite some early failures (mainly in the first Zürich game), has found his form. He’s never going to dazzle you with brilliant moves, but he’s very effective at smashing in close chances and has even shown some technique in recent weeks. All three of our midfielders (Schweinsteiger plus the rotating duo of Tymo and Goose) are good going forward, as are both of our fullbacks, and having offensive threats in the middle of your formation always makes it easier on the forwards. And, of course, Jupp Heynckes has brought flexibility, energy, and a new attitude, which certainly encourage aggressive and high-octane play by the offense.

But from where I sit, none of these guys are the prime factor that allows our offense to be successful.  The true engine behind our attack - the guy that really makes everything go - is a native Bavarian who just celebrated his 22nd birthday. 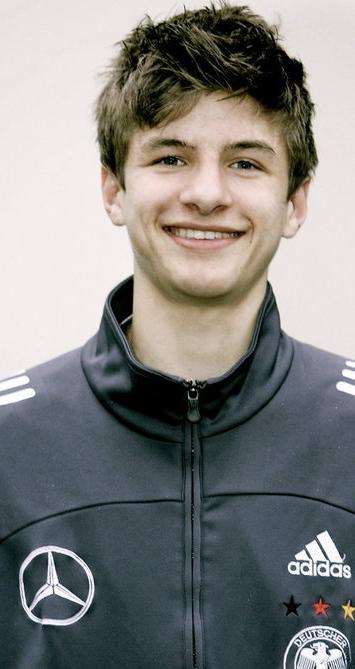 Where can I get one of those jackets?

When everyone is healthy, we have four guys playing in true forward positions - one striker, then a line of three behind him: a second-striker/high-middie type, and a wing on either side.  The formation and personnel may change from week to week, but for the biggest games this 3-1 will usually be used, and if the whole squad is fit, the 3-1 will be filled by Ribery, Müller, Robben, and Gomez.  Every successful offense needs a field tactician in order to succeed; of these four, Müller is the only one with an advanced grasp of the tactical needs of a high-scoring team.

Gomez is a sledgehammer.  He can be a damn good one, as his numerous hat tricks testify.  He has a good shot, he’s strong, and he can use his body to create separation from defenders.  With a team of creative dribblers and passers behind him, Bayern’s striker needs to be a guy who can just smash home the chances that can fall to him.  Gomez can do that very well.  But he would never be called a tactical genius.  His skills are physical, and he could mostly play the game with his brain turned off and be just as successful.

Robben is a dribbler-trickster.  When he’s healthy and locked-in, he can dribble with anyone in the world.  And this is vitally important, because when your opponents turtle up and play negatively, players like this can help break down the fortress.  Robben is the guy if you need someone to dribble-fake past two or three defenders.  But this isn’t really a form of tactical brilliance.  A natural dribbler like Robben (or Messi, or Özil) does his thing without thought.  The act of quickly directing and re-directing a ball around defenders is a physical, almost sensory process - like a batter’s swing, or a hockey player’s slapshot.  Fun to watch, and very effective from those who have a good one, but without much of a mental angle.

Ribery, as a guy with multiple tools in his arsenal (dribbling, passing, shooting) is somewhat closer to a master tactician.  He does have to have some idea as to how the opposing defense will operate.  But even Ribery’s game is more like Messi’s (or maybe more like a better version of his countryman, Malouda): to the extent he focuses on out-flanking and out-thinking his opponent, it’s only up until the point where he rounds his marker or clears away space for a shot.  He isn’t thinking three moves ahead, in the true style of a chess player.

Müller is the only one the four that could really be described as a chess player.  He’s the only one that can (for instance) look at a particular situation as the play is starting to take shape and say: “they have four defenders back around the goal.  The left CB has his outside shoulder turned too far in towards the middle of the field.  Therefore, if I try to split the CBs, he’s in a great position to cover me easily, but if I instead run around the outside of him, he won’t be able to turn quick enough and will lose track of me.  That will force their fullback to drift in to find me, and open up a big hole in the defense right where my wing will be.”  Of course, he doesn’t actually go through all of those words on the field.  The whole calculation takes place in a small fraction of a second.  But if you go into the Bayern training ground on Monday, when they’re watching game film, I guarantee you Thomas is having able to break down the on-field decisions with that level of precision.

Of course, if he were just a tactician, he’d be useless as anything beyond a coach.  The fact that he is an accurate passer and has a pretty good shot of his own to go along with his understanding of the game is what makes him so dangerous.  I’m still annoyed that he missed the Germany vs. Spain semi-final during the 2010 World Cup.  If he’d been on the field, who know how things may have turned out.  But both club and country are in a good position to fight for silverware right now, so hopefully Tommy will have more to write home about before he turns 23.

- As we mentioned on twitter yesterday, Breno was admitted to the hospital with smoke inhalation, and the fire destroyed his house.  Breno was kept overnight, but Nerlinger says he will recover fully and there is no lasting damage.

- Robben is a “maybe” for this weekend, but should be ready to go by the time of the big Manchester City match next week.  I’d prefer to let him get a few minutes in this weekend, just to get his timing back, but either way we’ve been playing well without him.  He’s also included in the Netherlands’ squad list for their October 7 and October 11 matches, but hopefully he’ll be held out of actual game action (as the Dutch have already steamrolled their group).

- More coming later this week, including a preview of the Leverkusen match.  As always, subscribe to our twitter feed at http://twitter.com/bayern_offside for up-to-the-minute information, and feel free to send any comments or corrections to bayern.offside@yahoo.com.  Thanks for reading.