Being a Fan in Football's Hinterlands

Share All sharing options for: Being a Fan in Football's Hinterlands

One of the great things about travelling to different places around the world is that it, even after you get back, the experience can leave you looking at your own town in a different way. Washington, DC is certainly a more cosmopolitan and international city than most, and we do have an MLS team that’s pretty well-supported. But still, soccer is way, way down on the list of items in the public consciousness. And the fans that do exist here generally keep to ourselves and don’t bother with evangelizing, which would surely be a waste of time anyway.

As some of you know, my wife and I went to Spain for nine days earlier this month.  First, as far as the question you’re all surely asking – “But Phil, did you sneak a Bayern kit into the Real Madrid trophy room and snag a picture with the Champions League trophy?”  Well, what kind of a Bayern fan would I be if I didn’t? 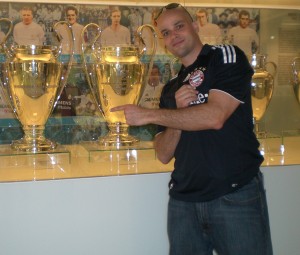 But more importantly, this was a rare opportunity for me to spend time in an environment where soccer is huge.  It’s not just the biggest sport, it’s one of the biggest non-work activities of any type.  There are entire newspapers that are dedicated only to La Liga, and multiple TV channels previewing upcoming games practically around the clock.  And people in every bar and restaurant – old and young, male and female, local and tourist – can give you a reasonably intelligent discussion of the sport and the players they like and don’t like.   As far as being surrounded by people who pay attention to the game, Washington and Madrid are pretty much as far apart as you could get.

When we (grudgingly) returned home, it was the day after the end of the first week of the NFL season.  NFL football is the biggest and most popular sport in the States, and Week 1 assumes a circus-like atmosphere.  On Monday and Tuesday, I was reading several columns online and talking to some of the guys at work, and I sort of started to “get into” NFL-ball, as they say.   I fixed my fantasy line-up for Week 2 and read ESPN’s “power rankings” and basically starting to work my way into NFL mode for the season.  I’ve always liked NFL football, but it’s even easier to take an active interest when everyone in your office and on the train and on the sidewalk is also a fan, and you all have a common frame of reference.  Everyone’s fan-hood seems to reinforce everyone else’s.

But when I woke up on Wednesday morning (the day of the Bayern-Villarreal match), the difference in my mentality was very stark.   Looking back on it now, it was a fairly comfortable win for FC Bayern, but I was frightfully nervous before the game.  Given the toughness of the group and the fact that we were on the road, I was terrified that we were going to drop points and find ourselves in a hole after the Villarreal match.   I went into the office on Wednesday morning and tried to get some work done, but it was impossible to concentrate on anything.  I ended up heading over to the bar a few minutes before game time, just because it was easier to sit over a beer with my eyes closed than it was to sit in my office rubbing my beard stubble and wondering whether Gustavo or Tymoschuk would start and pretending to work.

And it’s much weirder being nervous for a big game in an environment where everyone else is oblivious.  If you’re a fan of an NFL or NBA or major league baseball team, and there’s a huge game coming up, there are always people around with whom to talk about it.  Even if your team isn’t favored by most of the guys in your city/neighborhood, at least they’re generally aware of what’s happening.  You can see analysis and predictions on TV, there will be a column in the newspaper about the game, you will probably see some people in the street wearing shirts or hats expressing their loyalty.  But around here, if you’re a soccer fan, you wake up on the morning of one of those big games and you’re in your own world.

Which, I think, isn’t necessarily “difficult,” but it does demonstrate a bit of authenticity.  Say what you will about American soccer fans – and there are probably many good criticisms that can be leveled at us – but we didn’t get here by jumping on a bandwagon.  When someone in the USA gets really excited before an important game in the NFL, or a similarly big game in basketball, hockey, or baseball, it could be for any number of reasons.  He could be getting carried away with the contagious excitement that a lot of people around him are demonstrating.  He could be so immersed in the sport, through TV, internet, and media, that the excitement is almost forced upon him along with everyone else.   He might be unable to get the game out of his head because everywhere he turns, he sees a hat or flag or bumper sticker with the team’s colors.  But when a guy in the USA wakes up with a nervous knot in his stomach on the Wednesday of a UEFA Champions League match, there’s basically only one possible reason: it’s because he’s found something that just really MOVES him.

Sorry for the weird post, I think I’m still a bit jet-lagged.  Preview for the Schalke match will be up by Friday night or Saturday morning.  Thanks for reading.