Quick Thoughts on a Slow Offense

Share All sharing options for: Quick Thoughts on a Slow Offense

A long way from home for FC Bayern fans - who would have thought we’d be sitting here after week 1, worrying about the offense. That’s not to say that we didn’t have problems on the defensive end of the field, either. Neuer’s mistake, and Boateng’s failure to bail him out, are the most direct reason that we lose on Sunday. But it was the repeated failure of the forwards to break down the Monchengladbach defense that worried me the most.

The quickest way to generate offense is to have a guy who can beat defenders off the dribble. This isn’t the only way to create chances, and it’s usually not a good idea to rely on this every time without a back-up plan. But it’s a good way to start, and we’ve used it to great effect over the past few years.

When a forward can run through the ball, use moves and fakes to shake his man, and dribble into space, the formation of the defense starts to break down.  Immediately, another defender is going to have to slide up to stop the forward.  This creates a number of advantages: first, and most obviously, the area that the second defender came from is now open for a teammate to move through or occupy.  So a guy that can beat his man with a dribble move will often have an open teammate to get the ball to in the subsequent 1-3 seconds.  But it goes further than that - if a defender is beaten cleanly, there will often be more than one guy on his team who sees the need to slide up, or some confusion from the defense as to who now has to stop the ball-handler.  And for every defender who has to leave his zone or the man he’s marking, another, further away in the defensive formation, is going to be tempted to slide in to help the first guy who moved.  The specifics will always be different, but the basic idea is that a player who beats his man causes the defense to quickly change shape and composition.  Once that happens, holes will open up and opportunities to shoot or find a teammate for a shot will appear.

In the past couple seasons, the two guys who have generally filled this role have clearly been Robben and Ribery.  Müller will occasionally show a flash of dribbling skill himself, but the two wingers are the ones we’ve relied upon to do it consistently.  Both have a quick dribble and can stop and re-start almost instantly.  Both have a decent long shot.  Ribery is a slightly better passer, more likely to beat one man, then settle the ball and find an open Bayern teammate.  Robben is more of the trick-move solo specialist, more likely to try to beat two or three guys all by himself.  But he has sometimes shown the ability to draw defenders and then pass. 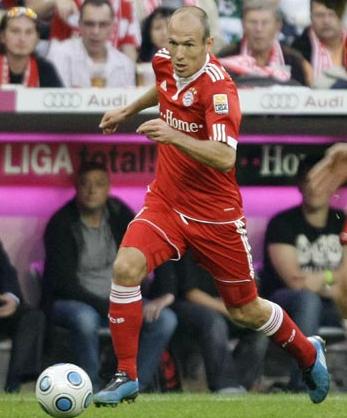 To the right! DRIBBLE TO THE RIGHT!!

Of course, now I’m just getting depressed, because I don’t know if “is” and “are” can be honestly used here at the moment.  Ribery played only ~30 minutes last game, and I didn’t feel like he created a lot of danger for ‘Gladbach when he took the ball at his feet.  Of course, there’s the matter of his injured ankle … but, that appears to be a standard function on this particular model.  When you become “that awesome guy who’s always injured,” the fact that you’re injured doesn’t really serve as an excuse.  Arjen looked 100% healthy, and he does still make quick, precise moves with the ball.  But he needs to refine his dribbling game a bit.  He loves to move from right to left, and doesn’t seem as confident in his ability to work the ball back the other way.  When he gets the ball on the right wing, more often than not, he ends up in the middle of the field before he shoots, passes, or has it stolen.  Which is OK, but teams have started to catch on and drop a defensive midfielder into the middle to wait for him, so that he’s dribbling into double teams a lot of the time.

Another tactic we’ve employed in recent years has been deadly passes from deep in the midfield.  When I say “from deep,” I don’t mean long-balls from the defensive side.  What we’re talking about is a central middie finding the other forwards from deep in an offensive formation.  This could be a through ball to a cutting wing, a high lob into the box, or a quick one-two (or even one-two-three) in which the first recipient of the pass sends it on to the next guy on the first touch.  Clearly, this is a tactic that can’t be dependent on one guy - if the wings are making good runs and the strikers aren’t good targets, then even a perfect pass won’t do any good.  But a good passer from a deep-lying spot can create opportunities even where it seems like there are none.

So, as we all know, Schweinsteiger has filled this role for us since before we can remember.  I wish I knew what the problem was.  Watching him dribble the ball off his face sort of exposed it for all to see - something isn’t right.  I thought taking the summer off from the German national side would re-energize him, but it hasn’t seemed to help.  In this past weekend’s game, you can point out that Ribery missed the whole first half and Kroos and Gomez didn’t play great, which does make it harder for a string-puller type.  But this cold streak has gone on a lot longer than one game; and, anyway, it’s the midfielder’s job to jump-start the offense when nothing else is working.

As far as what to do about it - right now, I wouldn’t change anything.  It’s frustrating losing to a mediocre club at home, but we did control possession for most of the day, and ‘Gladbach’s goal came on a fluke.  For now, we should do this:

(1) Assuming he’s healthy, move Ribery back into the starting line-up, Müller back to the CAM spot, and Kroos to the bench (he was a disappointment, too - no time to get into that).

(2) Be prepared to bring in Olic and Kroos at halftime if the offense can’t do anything.  Pulling Bastian from the starting line-up now, with no explanation as to when he might return, would start a firestorm in the locker room and the papers.  But Bastian and Gomez should know that they have to be more assertive, and that we have other guys who can do several good things on offense.

(3) Send Rafinha and Lahm forward more often, and encourage more over-lapping runs between the fullbacks and the wings.  The few times we did this last week, it seemed to open up a little space.  If Robben is going to cut over to the middle, let Rafina move past/behind him to the right front corner.  Obviously that makes it harder for the defense, but sometimes you have to take your shots.  And Gustavo looked good in getting back to help the CBs.  With those three (Boateng, Badstuber and Gustavo) minding the fort, Rafinha should feel confident he can venture forward.

(4) If nothing else works for several games, I would consider going to a 3-man back line.  This is a dangerous gambit, but a 3-2-3-2 or a 3-2-1-3-1 would create more layers for a defense to deal with.  If they’re going to pack 8 men into the area on defense, let them clamp down with Gomez with 3 defenders and then send other guys in behind him.  And it’s not like Badstuber is so great we need him on the field at all costs.

Just my opinion, of course.  If you have a better idea as to how to get the offense moving, leave it in the comments.  Thanks for reading.