The Bull in Winter

Share All sharing options for: The Bull in Winter 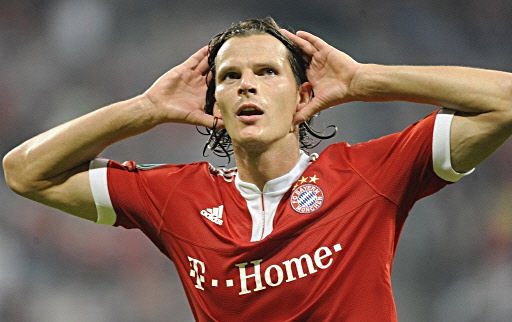 I’ve been resolved to write about Daniel van Buyten for a while now, but it never seemed like a good time. He was injured for much of last year, and his future was unclear. Then, this past off-season, it was rumored that he might be headed out of town, as Bayern shopped for, and eventually bought, a new center-back. I thought I might be writing a post-mortem on his Bayern career by now. But then he stuck with the club, and has now started the past three games. If we were to wait until he left the team to write a van Buyten column, it seems we might be waiting a while.

DvB has always really appealed to me for some reason.  I can’t exactly explain it, but he always seemed like the type of player that would leave a big hole in the locker room if he left.  Part of his appeal might be his big, lumbering frame - he almost looks like a cartoon character sometimes.  The fact that he’s friends with Ribery, with his small frame and his chin-beard and his shifty eyes, just constantly amuses me.  It’s like someone pulled them straight from the pages of a children’s book.  But even next to his average-sized teammates it’s interesting to watch him stoop over to listen to what they’re saying.  Also, I always thought this was a great shot: 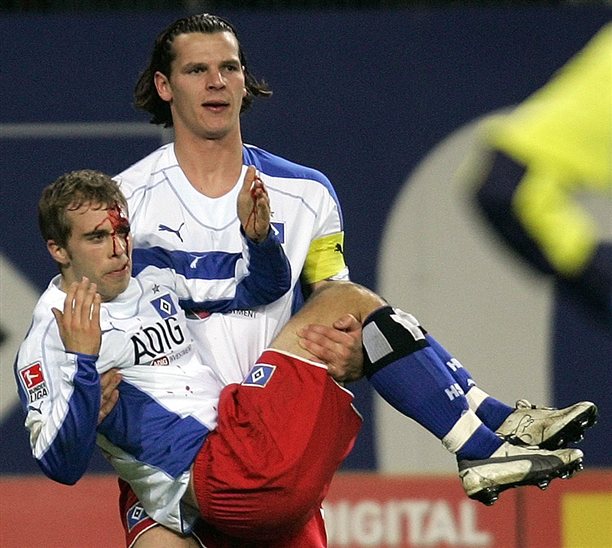 That’s his Hamburg teammate, Alexander Laas, who got hit in the face with a projectile thrown from the stands. Thanks to Dennis for the clarification.

Over the past 15 months, it’s been no secret that Bayern’s defense hasn’t been anywhere near where it needs to be.  There are a number of explanations, with Louis van Gaal’s tactical stubbornness and Martin Demichelis’ lack of effort and awareness first among them.  But it’s also impossible to deny that van Buyten isn’t the same player he was in 2007-2010.  Even at his best, he never had the quickest feet, but recently he’s noticeably slower than all of the forwards he’s marking.  The most egregious example, of course: 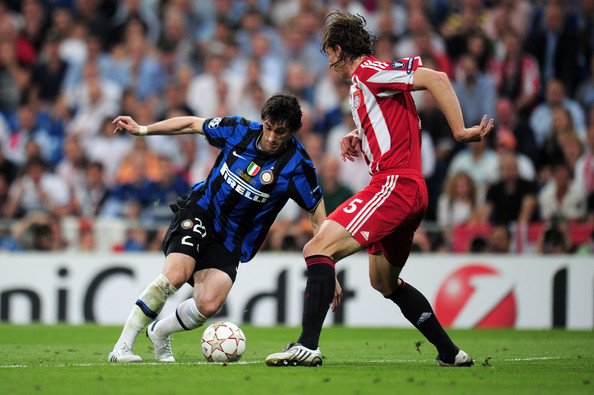 van Buyten joined the small fraternity of players whose worst mistake took place on the biggest stage.  He clearly got beaten, but Milito was in excellent form at the time, and has a good handle.  Once a striker strings together two good, aggressive touches, it’s very hard for the defender to stay with him.  Eventually, you have to gamble and guess one way or the other.  Name the best defender you could possibly think of, and I guarantee you could find at least one example of him guessing wrong and getting burned.  It’s nearly a random chance as to whether or not a guy getting burned will happen in training, in a less-meaningful domestic match, or in the biggest cup final in the world.

Anyway, after the Champions League final and the poor first half of last season, I think the reputation of van Buyten’s cement feet got a little overblown.  Over the last month of last season and the start of this one, he’s still been better than the large majority of starting CBs in Europe.  He can still muscle opponents’ forwards off the ball.  He’s still a respectable force in the air.  He throws himself into challenges, and you can tell that opposing strikers and wings don’t want to crunch into him on a 50/50 ball.  Other than Dortmund, Leverkusen, and maybe Werder Bremen, I can’t think of a single Bundi team that Daniel wouldn’t start for tomorrow.  Villareal looks like they could use an intimidator on their back line.  Hell, Arsenal’s apparently starting a bunch of dudes they pulled from the stands right before game time.

When we talked about the van Buyten situation in the spring, I said the key question would be this: assuming we bring someone else in to start (which we eventually did), would Daniel be a VALUED substitute - the first CB off the bench, getting decent minutes, maybe getting an occasional start?  Or would he be buried deep on the bench, not a part of the regular rotation at all?  Well, at the end of August, the results are in: agree or not, Jupp Heynckes still sees van Buyten as part of the puzzle.  If our best back 4 for the biggest games is Lahm-Badstuber-Boateng-Rafinha, then DvB is the first substitute in case of injury or fatigue.  Even if Raf or Lahm has to leave, Heynckes likes Boateng at fullback and DvB in the middle more than Boateng in the middle and Contento at fullback.  And unless something big happens in the next two days, he’s still in our CB rotation at least until January.

Eventually, of course, he won’t be.  Even if he stays fit and continues to perform, at some point we’ll turn the roster over at CB.  That’s a separate discussion - is Badstuber-Boateng our pairing for the future?  Is there any chance we can pry Hummels loose?  But sometime in the near-to-medium future, we’ll uncover a guy who can back up (or replace?) one of those two with a little more explosiveness - a guy who’s improving as van Buyten is hitting the wall.  He’ll be faced with the same decision, only this time, “still-valued backup” won’t be an option.  At 33 years old, there’s no way I could see him getting meaningful minutes for us in two years from now.  Either he will get sold to some new-money Russian outfit, he’ll go back to play in Belgium or France for a few years, or maybe he’ll remain at Bayern in an emergency CB / respected locker room influence role.

And that’s cool, ‘cause that’s part of the game, too.  Daniel and I arrived at this club at the same time - he as a player, me as a fan.  Over the past five years, he’s been a solid supporting character for the club - never a star that makes headlines, but a guy who’s anchored the defense and provided a little muscle when we need it.  And a guy who shows some stone-faced determination even when pulling locker-room pranks:

Over that time, he was able to help us win four domestic trophies and take us to the sport’s biggest game.  And on that particular day, he just didn’t have what was needed to get us over the hump.

Anyway, we can worry about Daniel’s future some other time.  Right now, we’re looking for trophies in three competitions.  We come back from the international break with three important games in the span of a week.  And with a run of matches like that, you know we’ll need a little muscle at CB.  Thanks for reading.