Share All sharing options for: Preview: FC Bayern vs. Kaiserslautern

In week 4 of the Bundesliga season. Bayern is undefeated since our week 1 loss vs. Monchengladbach, and has won our past two by a combined score of 7-0. Kaiserslautern, meanwhile, sits near the bottom of the table, coming off a 1-1 draw vs. struggling Köln. But they defeated us last year in an early season match and were tough at home in last year’s campaign, picking up 24 points from 17 games with a +6 goal differential.

Arjen Robben is again set to miss out.  This time, it’s being called a groin injury.  So far this year, we’ve had back, foot/ankle, and now groin.  As we discussed earlier this week, his continued absence creates two problems: first, obviously, we need his creative and aggressive dribbling to help create scoring chances.  Second, when he’s out of the line-up, Müller moves to the right wing.  Not only is he not as deadly from the wing as Robben, but we also miss Müller’s touch and vision in the CAM spot.

Anyway, Robben appears to be the only absence.  Gomez had a slight hitch in his step as he left the Zürich game, but he appears ready to go.  Rafinha was apparently held out only for rest/recovery reasons, and he should be in the starting line-up.  Daniel van Buyten, despite playing pretty well over the past two games, probably goes back to the bench to make way for a back four of Lahm-Badstuber-Boateng-Rafinha.

As mentioned earlier, Kaiserslautern beat us last year and put together a surprisingly good campaign overall.  In their first year back in the 1. Bundi after an absence of several years, they finished an impressive 7th.  Their early season win over Bayern contributed greatly to our run of awful performances.  I haven’t seen any of Kaiserslautern’s games this season, but according to ESPN they run a pretty standard 4-4-2 formation.  Up top, they’re led by Etay Shechter and Richard Sukuta-Pasu, but Ivo Ilicevic is possibly their most dangerous forward.  The Croatian can play either from the wing or from the middle of the field.  He scored against us last year, and had K’slautern’s only goal last week, so we’ll pencil him in as the man to watch.

Other Kaiserslautern facts: their nickname is The Red Devils, they previously employed Hamit Altintop’s twin brother Halil, and they have a very respectable record of success: two Bundesliga titles and two DFB Pokals won in the past 25 years.  Most fans know that Miroslav Klose made his name with Kaiserslautern, scoring 44 goals in 5 seasons with their senior club, but their system brought up more respected footballers than I’d realized - Dortmund ‘keeper Roman Weidenfeller, former Team USA captain Thomas Dooley, famous Czech striker Pavel Kuka, and the one and only Michael Ballack all came up through their system.  This surprised me - I recalled that Ballack has played at Leverkusen before Bayern, but I didn’t realize that he played with both the senior team and the reserve team with K’slautern.

Their home ground is the Fritz-Walter Stadion, which was one of the grounds used for the 2006 World Cup and looks pretty cool.  It almost looks like it’s going to transform into a giant robot and walk away: 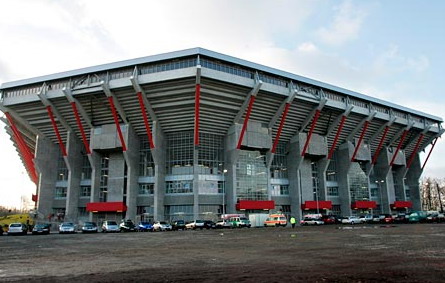 - The game is NOT on ESPN 3 for some reason - they’re running the Stuttgart/Hertha Berlin match this afternoon, and the Dortmund game tomorrow afternoon, but nothing tomorrow morning.  Luckily, the match will be shown live on Gol! TV.

- The forecast calls for light rain in the morning, but clearing up by game time.  It should be partially cloudy and somewhat cool.

- Finally, Manchester City manager Roberto Mancini has vowed to win a “quadruple” this season, and The Sun describes his club as having dodged a tough “group of death” draw.  I can’t wait to welcome these new-money clowns to the continent.  Thanks for reading.