Share All sharing options for: Preview: FC Bayern vs. Zürich

In the second leg of our Champions League Final Qualifying Play-off Round. Bayern carries a 2-0 lead from the first leg, with Schweinstieger and Robben both finding the net last week. Bayern also comes into the match full of confidence, having crushed Hamburg 5-0 this past weekend, and having conceded only one goal so far this season (a strange/fluke play that may have resulted from defensive miscommunication).

Nonetheless, no one is in the mood to take anything for granted. Chairman Karl-Heinz Rumennigge has cautioned against any belief that the club has already clinched Champions League qualification: "If we make the mistake of playing with arrogance then it could be problematic. We have to score to make it 1-0 and then there will be silence, then there will be clarity." Indeed, if Bayern can pick up an early goal, the tie would probably be beyond reach: with 3 goals total, and 1 away goal, Zürich would need to score 4 times to win. Whereas, if Zürich scores first, they’d then need just a single additional goal to bring the match level.

Nothing released yet on the club’s official site.  The line-up against HSV looked was without Gustavo or Boateng, a pretty obvious sign that they were being saved for tomorrow’s Zürich game.  So I expect Boateng and Badstuber at the CB spots, and Goose and Bastian at the CDM positions.  Considering Kroos didn’t play at all on Sunday, there’s a great chance he’ll get some burn tomorrow as well.  The questions is whether any of the other regulars will get some time off - I believe Rafinha and Lahm have both played every minute this year, so I’m going to go out on a limb and predict a Contento sighting.  But I’m usually wrong about that kind of thing. 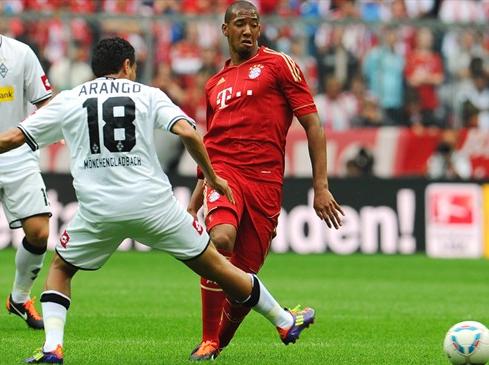 One player we definitely won’t see: Ivica Olic.  The Croatian Sensation tore a tendon in his hip, and will be out for two months.  Three reactions to this: first, it’s incredibly frustrating to watch him get hurt after working so hard to come back.  I feel bad for him, but he’s always been a hard worker and a great rehab guy.  If he can come back healthy by winter, it might be exactly when we need reinforcements (if Gomez, Müller or Petersen gets hurt, or just if one or more of that group is fatigued or slumping).  Second, he got hurt on play where he scored a goal.  That will hopefully make it feel not quite as cruel, and he can take solace in the fact that he was looking sharp and aggressive in the 20 minutes he was out there.  Third … I hate to even bring it up, but I have to notice that he went to the sideline with about 10 minutes left, got poked at for a minute by the physio, then went back out to keep running for the last couple minutes.  That probably didn’t have anything to do with making the injury worse.  Still, we were up by 5 goals - nothing to be gained by sending him back out there, and plenty to be lost.

Everything I said about Zürich last week applies.  They’re coming off a 2-0 loss to Xamax in the Swiss Superleague, which could mean they’re low on confidence and falling apart, or it could mean they were saving themselves for this tie.  Manager Urs Fischer is not ready to give up, if his statement to UEFA.com is to be believed: “there is still a chance and we will believe in it … We did that very well in Munich and made their life hard in the first half.”

Bayern came into town yesterday.  Zurich’s home ground is the Letzigrund, which seats just under 24,000 and has the pitch-surrounded-by-a-race-track thing going on.  Even so, it carries a pretty cool look.  If you peek over the edge of the seating structure, it looks like the view is one of Swiss Mountains in the background.  Beats the view from my office by a damn bit:

- The match is on Fox Soccer Channel at 2:45 PM Eastern in the USA.  We’ll be here with a Match Day Thread, and immediately afterward with a match recap and some video highlights.

- Chelsea midfielder Mikel’s father has been released alive and recovered, and his kidnappers arrested.  Great news.

- At match time tomorrow, the temperature is expected to exceed 90 degrees Farenheit (33 degrees C) with little or no winds.  I wonder if we’re still planning on using the black international kit?

- Lastly as some of you may have heard, several blogs on The Offside’s network have already announced that they will be switching over to new and different formats soon.  This blog will be doing so sometime over the next few months.  I know little more than that, but will give more details as soon as they become available.  I can tell you that the new platform will involve a better interface for graphics and video, and more opportunity for commentors to post (including maybe posting pieces of your own).

If you want to, of course.  If you like things the way they are, everything important is going to be staying the same.  I think you’ll even be able to access everything from this site, so you can just ignore this paragraph if you don’t feel like dealing with it.  Thanks for reading.