Share All sharing options for: Preview: FC Bayern vs. Zurich

In the first leg of the 2011-2012 Champions League Final Qualifying Play-off Round. The two clubs will meet tomorrow, and then again this coming Tuesday, regardless of the result. Most total goals over the two legs wins, with away goals serving as the tie-breaker.

Bayern is coming off of a thrilling but not-really-convincing victory over VfL Wolfsburg. For the second consecutive game, our offense looked lethargic and failed to consistently create dangerous chances in the opponent’s end of the pitch. Mario Gomez, last year’s Bundesliga goals leader, is revealing his limitations when it comes to touch and creativity with the ball at his feet. At the same time, Gomez would probably say that a striker is only as good as the chances he gets, and mediocre play from Schweinsteiger and Kroos has left Bayern without the ability to feed the ball into the most dangerous positions. At any rate, Wolfsburg is a solid team and we did beat them at their ground, so the club doesn’t appear to be hitting the panic button yet.

Oft-injured RW Arjen Robben appears to be healthy and is expected to start.  The club hasn’t released the official line-up yet, so we don’t know who will fill out the formation.  Our typical line-up, with Gustavo having solidified his grasp over the CDM spot, involves Neuer at GK, Lahm - Badstuber - Boateng - Rafina on defense, Schweisnteiger- Gustavo at the central midfield spots, Ribery - Müller - Robben on the attacking wing/middie line, and Gomez as the front striker.  Although this is our “standard” line-up, tomorrow may actually be the first time we see it all year, due to Ribery’s injury for week 1 and Robben’s for week 2.

I’m not convinced that we’ll play this one straight, though - between this weekend’s game vs. Hamburg SV (Saturday afternoon) and the continuing offensive lethargy, Jupp Heynckes might see fit to make any of the following substitutions:

- Olic for Gomez at the striker spot

- Olic or Kroos for Müller at the second-striker/CAM spot

- Olic or Kroos at the second-striker/CAM spot and Müller up top (we haven’t seen a lot of this, but I’m convinced Tommy could thrive there)

- Kroos for Schweinsteiger at the CDM spot (Kroos didn’t play well there last year, but maybe it would wake Bastian up)

We’ll be back to update this as soon as the line-up is available, or just to post a whole new Match Day Thread.  Either way, expect the unexpected with respect to Bayern’s formation, either at kick-off or at the first substitution.

I know very little of FC Zürich other than what I’ve learned online over the past few days, so anyone with any deep insight or funny stories to tell about them is welcome to bring us up to speed.  They appear to be one of the perennial powers of the Swiss Super League, along with Basel, Grasshoppers and Young Boys.  They finished in second place last season, good enough to earn them the right to play in the CL Qualifiers, and their 2-1 aggregate victory over Standard Liege brought them to this match.

According to Wikipedia, Zürich’s leading scorer last season was Alexandre Alphonse, who is listed as French but plays for the Guadalupe national side.  Unfortunately for “FCZ” (that’s their only nickname I could find), Alphonse is out with a calf injury.  The guy who scored both of their goals in the two legs vs. Standard Liege was Admir Mehmedi, an Albanian-Swiss forward, so I’ll go ahead and declare him the guy we have to keep an eye on.

The key to advancing is going to be consistently creating chances and then scoring them.  That may seem counter-intuitive, in that tomorrow is our home leg and we’re playing a weaker team.  But really, even if we allow a goal through a fluke or a glaring defensive breakdown, Bayern should still win handily.  Over the course of 180 minutes, we ought to score AT LEAST 3 goals against these guys, even if they completely play a “park-the-bus” strategy.  If we can do that, it won’t matter whether they can snatch a goal from us, even if it’s away.

- The match is on Fox Soccer Channel in North America, as are all CL matches this year.  Kick-off is at 8:45 local time, 2:45 Eastern in the USA.  We’ll have a Match Day Thread up on the site, although I might be indisposed.  Also, if anyone lives in DC and wants to meet up at a bar to watch, e-mail me.

- Tomorrow promises to be warm and mostly sunny, but with a slight chance of thunderstorms in the evening.

- Captain Phillip Lahm’s diagnosis of the problems thus far: “We have to switch faster from defence to attack, and pass the ball forward more quickly.”  Are you gonna talk about it, or are you gonna fucking do it?

- Lastly, Thomas Müller appears to be growing a beard: 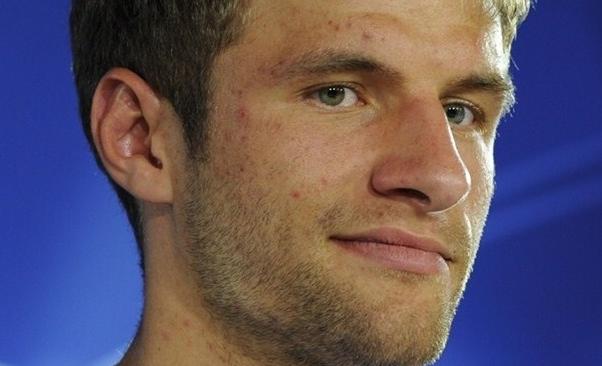