Readers Chris P. and Bayern4Life alerted us to a pair of deceptively important transfer moves that were put together over the weekend: Manchester City’s pick-ups of Gael Clichy and Stefan Savic leave the Citizens with a well-stocked back line for the upcoming season. As we all know, Jerome Boateng suffered an injury last spring, but even before that he was out of favor at CB. These new transfer moves could render Boateng even more likely to be sold.

City finished the season with Joleon Lescott and Vincent Kompany at their two CB positions. So already, Boateng was likely to be used either as a fullback or as the first defender off the bench. But the additions of Clichy and Savic would push him even further down the chart. This is all guess-work, because I don’t follow Manchester City very closely, but their back line would probably look something like this:

Does that look about right? I don’t know, someone correct me if I’m wrong. But even if all the details are not perfect, it appears that City is ready to move on without Boateng. Since JB and Bayern have already agreed on a possible contract, all that remains is whether the clubs can reach an agreement on a transfer fee.

At this point, it almost seems weird to be hoping so fervently that Bayern ends up paying for Boateng, considering I’m not even sure he’s all that great. From what I’ve seen, he’s a solid defender who doesn’t make many horrible mistakes, but not the kind of "lock-down" CB who can control the game and snuff out every attack like Vidic or Pique. But I suppose not many guys like that are available, and if Boateng is the best that’s out there, then we have to hope the deal will get done. The Gabriel Milito and Simon Kjaer rumors have died down, so our options appear to be either Boateng, or else go with some combination of Badstuber-Gustavo-van Buyten-Breno and then see if we can reinforce in January.

Anyway, for what it’s worth, Bleacher Report speculates that the two clubs could meet in the middle with a €15 million Boateng deal. Man, that’s a lot of money for a guy coming off a serious knee injury. Either way, we’ll keep you updated. 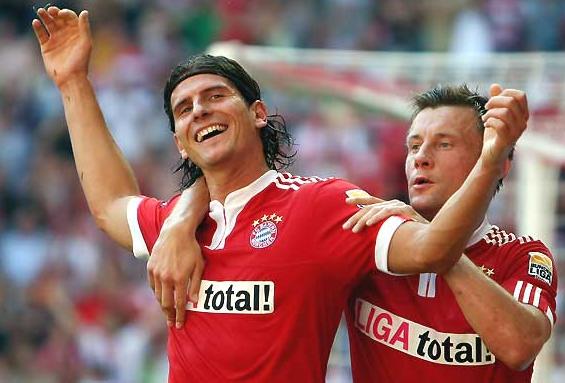 Can these two share the pitch? And if so, who sits?

The other interesting item of the day is the Bayern official site’s interview with Mario Gomez. Obviously these are never hard-hitting interviews; the club basically just asks the players to describe how great the squad is and how excited they are, etc. But I did find this bit worth reporting:

"But defending the top scorer accolade next season is absolutely not a target," he declared at the club’s Trentino training camp. Nor is he looking for a specific total in the new campaign: "I never set myself that kind of target."

I guess I’m just used to American sports, where the guy would say something like "I got 28 last year, I’m goin’ for 30 this year. Wooo!" Gomez’s more subdued statement seems to indicate either of the following:

(1) I don’t care about individual statistics and accolades, we just want to win; or

(2) I just want to play at the highest possible level, and the goals will come.

What they didn’t ask Mario was how the club is going to work Ivica Olic back into the line-up. The Croatian striker tore up all competition in the 2009-2010 season, especially during the Champions League, but sputtered last year before being sideline with an injury. Clearly the club’s official press shop can’t ask Mario whether he feels like he has to fight for his spot. But I would be interested to see whether Heynckes has discussed minutes with Mario, and whether he might be forced to sit some games to give some space to Olic (and, to a lesser extent, new signing Nils Petersen). Keep in mind that Olic and Gomez have played at the same time before, so it doesn’t have to be an either/or decision, although it’s hard to see how Gomez, Olic, Müller, Ribery and Robben could all share one ball.

Either way, if he comes close to 28 league goals and 5 hat tricks again this season, Gomez will have earned his keep. Unlike the defense, which was in need of a serious rebuild, the offense finished the season on a high note and shouldn’t need much in the way of major changes. If Olic, Petersen and maybe Usami can work themselves in without ruining what the forwards already have, we should be creating a good number of chances and goals. After that, it’s up to Neuer and the new back line to turn that into wins.

We’ll be back with more tomorrow or Thursday, I wouldn’t be surprised to see a new deal consummated before then. Also, we’re only a few weeks away from the Audi Cup, so we’ll preview that tournament and look into the club’s training sessions. Thanks for reading.