In the opening-day semifinals of the Audi Cup. We know Ribery is out with an ankle injury. The best bets to replace him are either Usami or Müller (with Kroos starting at the CAM/second striker spot if Müller moves to the left wing).

Other points to consider:

- with games on back-to-back days, will either manager (Heynckes for Bayern, Allegri for Milan) leave some of their usual starters out of the line-up today? We saw all four of the teams involved in last week’s Liga Total! Cup use some unusual and experimental line-ups, but this is a more serious tournament, and also the last tune-up before the Pokal for Bayern.

- will Milan’s South American stars be ready to go?  Robinho, Alexandre Pato, and Thiago Silva were all recently involved in the Copa America, but are expected to be on hand today.  If Pato and Robinho are both starting (along with Zlatan), Bayern’s back line will have its hands full.  Those three form one of the world’s most dangerous attacks, and FC Bayern’s rebuilt defense will be tested early and often - Jerome Boateng will be getting his first start, Rafinha only his second, and Lahm has his last run-out at his new LB position before the season starts. 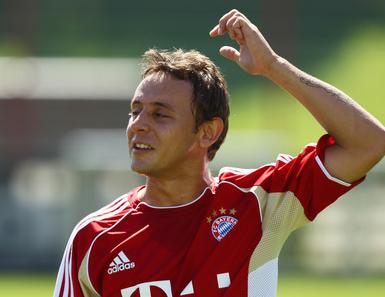 Big test for you, Raf

- can Bayern’s new additions get the job done?  Usami, Petersen, and Rafhina all looked good in last week’s matches, while Neuer was underwhelming without being actively poor.  Also, Alaba, while not technically a new addition, appears ready to claim a spot on Bayern’s roster after wandering in the on-loan wilderness for too long.  The contributions of these five guys are key regardless of the situation, but with games on consecutive days and Ribery out of the line-up, it will be even more important to get good performances.  I have my eye on Rafinha especially.

This one is on Fox Soccer Channel if you’re in the USA.  I will be watching at the bar, so I probably won’t be doing a ton of commenting, but if I can find room for the lap-top maybe I’ll keep up a skeletal running commentary.  Needless to say, we’ll be back this evening to go over the results, look ahead to tomorrow’s opponent, and maybe post some video highlights. Thanks for reading.

Back with more once this wraps up, just wanted to throw up some regular time highlights for those who weren't able to watch.

Gomez's shorts pulled down - why the hell isn't this a foul?

UPDATE - Bayern wins on penalties. Deservedly so, as we controlled possession and dominated most of the game, although the CB spots are still a potential source of weakness. As we learned last year, if you control the ball 60% of the time and play a good passing and possession game, but still leave yourself open to counter-attacks, you can never feel safe.

Rafinha is looking like a great pick-up. Kroos is rounding into shape - that front 4 of Gomez up top, then Muller-Kroos-Robben behind looks deadly. Once Ribery returns, it will be interesting to see how they adjust, but for now that appears to be our front 4.

Schweinsteiger still isn't in his best form. Gomez still lacks a soft final touch (seriously, Mario, just kick the ball like 10% less hard. If you could do that, you'd score 4 goals a game). Lahm was adequate - made a few plays, got forward pretty well, missed a chance to hit Muller with a nice pass when he left it short in the 1st half.

Anyway, we're in the Audi Cup final tomorrow vs. Barcelona. Even with a few of their players missing, this will be a tough challenge. Olic and Usami will probably get some good minutes. I'll be back with more later, just wanted to get this up for those who couldn't watch.