Share All sharing options for: 2011 Audi Cup Preview - Ribery Out with Ankle Injury

Tomorrow marks the beginning of the 2011 Audi Cup, a pre-season tournament hosted by FC Bayern that serves as the final tune-up before our domestic league and cup competitions. The previous Audi Cup ended with a Bayern win over Manchester United, which required penalties after a 0-0 draw. This year’s edition will feature FC Bayern, Barcelona, AC Milan and Internacional. Barca and Internacional kick off the early game tomorrow, with Bayern and Milan immediately following, and then the winners play each other for the Audi Cup on Wednesday (with the losers contesting a third-place match).

A brief look at the teams:

The defending Serie A champions and one of Italy’s most decorated clubs.  After a disappointing 2009-2010, in which they limped to a third-place finish and saw local rivals Intern win the treble, Milan rebounded nicely last year, winning their 18th Scudetto.  Offensively, Milan are led by Zlatan Ibrahimovic and Alexandre Pato, with Zlatan playing up top as the classic lead striker and Pato laying in behind him in a second striker or wing role.  They’re supported in the midfield by Mark van Bommel, who served as FC Bayern’s captain until he was offloaded last year in one of the low points of the van Gaal era, and Kevin-Prince Boateng, the Ghanian international best known for breaking Michael Ballack’s ankle.

Although I don’t follow Serie A too closely, my gut feeling is that Milan will be the best side in that league again this year.  From what I’ve seen of Pato, he is a very consistent scorer who can will put up double digit goals every year and help open things up for his teammates.  They also picked up French defender Philippe Mexes, who is coming off of surgery but is widely regarded as one of the best defenders in Italy.

It’s unclear what kind of a line-up Milan will field for their game against us tomorrow.  Their English-language website indicates that the club still has a trip to Asia to complete before the Serie A season begins.  Therefore, we might expect them to be a little less polished and a little more willing to do some experimental work.  So I wouldn’t even want to guess at a line-up or anything.  It will be interesting to see van Bommel take the field, though.  I hope the Allianz Arena crowd gives him a warm welcome.

Sport Club Internacional is one of Brazil’s most popular and decorated teams, and winners of the Copa Libertadores (South American Champions League) in 2006 and 2010.  Unlike the other three clubs taking part, Internacional is right in the middle of their domestic season - they scored a 3-1 victory over Avaí this past Thursday, and they’re back in action this coming Sunday vs. Goianiense.  It will be interesting to see how this affects preparation and planning for the Audi Cup: on the one hand, you would expect Internacional to look sharper from the outset, already being in mid-season form.  At the same time, they might be even more cautious than the other clubs as far as risking injury, so who knows what kind of lineup they will field.

Perhaps the best known player listed on Internacional’s roster is Jò, the Brazilian forward who played previously with Machester City and Everton.  But I have my eye on Oscar dos Santos Emboaba Junior (commonly known as just “Oscar,”) the 19-year old who plays for Brazil’s U-20 team and has already racked up 5 goals in only 7 starts during the current Brazilian season.

UPDATE - apparently Oscar is on Brazil international duty and won't be travelling with the club. Thanks to Eleno Stertz for the correction.

I assume Internaciaonal plays a rather attacking and free-flowing style, but that’s just my stereotypical impression of Brazilian teams, not something I’ve gathered from actually watching them.

Football fans need no introduction to Barca.  Like ‘em or not, they are regarded as the best club in the world right now, having won 3 straight titles in La Liga and 2 of the past 3 Champions League trophies.  Like Milan, Barcelona still has some more international show-boating to do after the Audi Cup (they’re actually playing Man U right down the street from me this coming weekend).  So expect manager Pep Guardiola to mix things up with unorthodox lineup combinations, and maybe to pull some of his starts off the field early.

One thing to keep an eye on is whether new signing Alexis Sanchez makes the trip.  The young Chilean forward was only recently signed from Udinese, and was in Argentina earlier this month as part of the Copa America, but today’s news has him arriving in Barcelona over the weekend.  I’d bet he doesn’t see the field this week, but it would be pretty exciting if he did.

For our Bavarian heroes, this is the final tune-up before the Pokal starts this weekend and then the Bundesliga season after that.  The big news today is that Franck Ribery’s ankle injury is more serious than originally hoped, and that he will probably miss the start of the BL season (and certainly won’t play in the Audi Cup).  This is exactly how last season started - always missing either Ribery or Robben, or both, for the first half of the season - so we can only hope that he doesn’t need surgery.  New boy Takashi Usami is the most natural wing we have on the bench, but Müller can play in the Ribery spot (with Kroos taking the second striker role) if need be. 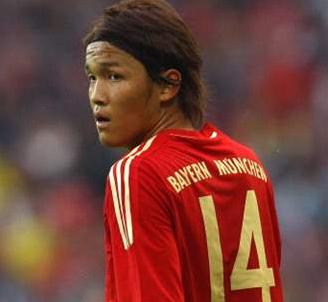 We need him a little earlier than we thought

Either way, I’m actually not that worried about the offense.  We know that, if Ribery, Gomez, Robben, Müller and Olic are all healthy, we can score goals.  Even if one or two of those guys has to miss time, we have enough good subs to put together a solid attack this year (especially with Kroos, Usami and Petersen all looking sharp last week).  Our biggest concern is on the defensive end of the pitch.  What we need to see is this:

- Jerome Boateng on the field and playing well

- Holger Badstuber shutting down opposing forwards and not getting burned

If at least 2 of ^ these 3 things can’t happen, we need to know now, so we can hand over a CB spot to Gustavo or Breno.  No point in waiting until we start losing Bundesliga or Pokal games to address the problem.

I’m not panicked, though, keep in mind Boateng didn’t play last week and he was always intended to be one of our biggest moves.  Also, Rafinha did look pretty aggressive on defense from that RB spot.