As several readers have pointed out, this week’s Liga Total! Cup, in which Bayern lost to HSV and then gave up a lead to Mainz only to prevail in a shoot-out, is not worth panicking over. Not only was this not a regular season competition, it wasn’t even our most important pre-season competition (the Audi Cup starts Tuesday). Nonetheless a few observations can be drawn from what we saw this week.

Many of the conclusions are not positive. Our back line struggled mightily, as both Hamburg and Mains were able to carve up our back line and create chances. Offensively, we looked a little better (and Toni Kroos is rounding into shape as a great player), although we still blew too many chances and out timing seemed a little off. But for most of the past two days, I’ve been focusing on something more specific: the play of our off-season pickups.

Every player we picked-up (or recalled from loan) got at least some action over the course of the two Liga Total! Cup games, with the exception of Boateng.  In a shortened pre-season formant, it would be a mistake to draw any firm conclusions, either positive or negative, from what we saw.  But I do think we witnessed enough to at least get some idea as to what we’ve purchased.  Specifically:

Usami played only in the second game vs. Mainz.  I thought he played well.  A good dribbler, he looks like someone who could fill in for an injured Robben or Ribery right away.  His passing isn’t great, although I think he sent in a pretty good cross in the first half of the Mainz game that ended up being squandered.  I think we have to be very satisfied with the loan deal that brought him here (considering I didn’t even know he was going to be starting the year with the senior team).

* * * *
UPDATE - courtesy of reader Fredericoho, we have full video highlights of Usami's performance. He has incredibly fast feet.

Not technically a “pickup,” but since we recalled him from his loan spell, he was new to us this year.  Alaba showed a lot of energy and did a very good job, in my opinion.  Scored a nice goal in the Mainz game with a precise header.  If he’s going to play midfield in a 4-2-3-1 setup, he will have to get a little more aggressive defensively.  Another guy like Usami - considering his age, he’s far ahead of where you would expect him to be.  The biggest problem for Alaba might be that Kroos played so great … a big log-jam developing at those CM spots.

None of the goals we allowed were directly his fault, but I think a lot of fans were underwhelmed.  On Hamburg’s first goal, pasted below, Neuer tried to leap into the path of the ball to swat it away, only to pull back at the last second and crash to the ground.  He might have run into one of his own defenders, and communication is always going to be a problem in the first pre-season game, but on a ball into the area it’s the GK who has the ultimate responsibility.  You don’t lunge into the play unless you’re pretty damn sure you’re going to get to the ball - otherwise, if the ball rebounds to your opponent, they can just knock it right in (which it did, and which they did).

Later in that HSV game, he did make a nice reaction save on another shot, and he had one decent save in the Mainz game - the ball was pretty much right to him, but he had positioned himself well and competently snuffed it out.  basically, it will probably end up being a good move to get him, but he’s not going to be able to solve our defensive deficiencies by himself.

I was surprised at how useful Raf looked.  Defensively, he really gets after the opponents’ forwards.  We were missing that last year, as our defensive strategy often seemed to be to tighten the formation and wait for the other team to make a mistake.  Which is fine, if that’s what the coaching staff wants, but sometimes you need someone to just charge right at the dribbler and attack him.  Hopefully, Rafinha can be the kind of guy who forces our opponents to turn the ball over or hit a bad pass, rather than just sitting in our zone and waiting for him.

Offensively, he didn’t do much.  It might take him a while to get worked into the flow of our offense.  He had a mostly young/new-comer offense on the field with him for the Wednesday game, so it’s hard to judge.

Another guy who got the start in the Mainz game, he gave us the lead in the second half before we let Mainz back into the game.  He has an accurate touch and seems to provide a pretty good target for passes from the middle of the field and in from the wings.  Physically, he’s a little smaller than I thought he would be.  In the unlikely event that Gomez, Olic and Müller all get hurt, I would feel comfortable throwing him out there against even good defenses.

On the whole, I think most of the new boys accorded themselves well.  You can’t judge too much from a pair of games like this, which are basically a scrimmage, but they certainly weren’t the reason we gave up 4 goals in 2 games (that comes down to defensive breakdowns in the middle of the field … again).  Of course, if Boateng can justify his € 14 million price tag, we’ll have some improvement in that area as well.

Some final notes before I head out for the weekend:

- Bayern has unveiled our third kit for the upcoming season.  This one will be worn in Champions League competition.  I like the horizontal stripe, but I was hoping for a collar. 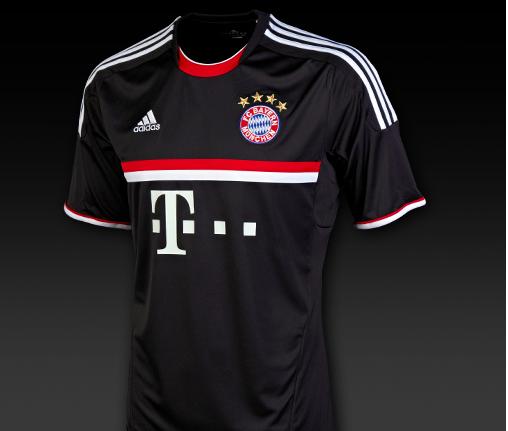 - As mentioned the Audi Cup kicks off on Tuesday.  We’ll be back over the weekend or on Monday to preview that.  I expect a much more intense atmosphere - still pre-season, but a lot more meaningful.  The Pokal begins the subsequent Monday, so next week is our last chance to work out the wrinkles.

Have a great weekend.