For those who are interested, the Liga Total! Cup kicks off this afternoon. Four Bundesliga clubs - FC Bayern, Mainz, BvB, and Hamburger SV will play matches today and tomorrow (winners of today’s matches play for the title, losers of today’s matches play for third place). The Liga Total! Cup’s official site has more details. This is clearly a practice/"get your feet wet" tournament, and each match will run only 60 minutes instead of 90, but it could be a good chance for our newcomers to work their way into the team. If you’re in the USA, ESPN 3 will carry a live online feed. FC Bayern’s own site has an analysis, with coach Jupp Heynckes saying that the squad "will include newcomers Jerome Boateng and Takashi Usami," though that doesn’t necessarily mean that they’ll get a lot of playing time. 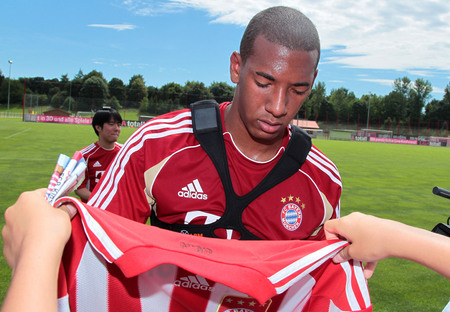 He looks better in red

With Boateng on board and Leverkusen’s Arturo Vidal rumored to be headed to Italy, we have a pretty good idea as to what this year’s line-up will look like.  Depending upon who gets dropped to FC Bayern II, our available roster will probably look something like this:

- Sattelmaier and Dale Jennings are not listed - I believe they will start the year at Bayern II.  If I’m wrong about that, then include them on your scorecard.

- Breno is listed - several South American teams are said to be pursuing him, and the Boateng move might make him a good sell.  HOWEVER, this is not a sure thing - there is still a chance he lines up with Bayern this year, so I’m going to leave him on there for now.  Personally, unless he’s demanding to leave, I would be cool with keeping him.

- Player’s whose natural position is on the wing are listed as “Forwards.”  They could just as easily be called midfielders, but because our default formation will be a 4-2-3-1, those wing players are basically going to be on the offensive side of the field most of the time, so I listed them there.  That would include Ribery, Robben, Usami, and Pranjic.

So, as far as line-ups - in big/vital games, Neuer, Lahm, Bastian, Ribery, Robben and Müller will always be starting as long as they’re healthy.  Boateng, once he gets his feet under himself, will probably be in that same group.  I would hope Rafinha has to earn his spot over Contento, but everything from the club indicates that Rafinha will probably be starting in the big games.  That leaves three positions where you could say there is some question as to who will get the nod: striker, other CDM (next to Bastian) and other CB (next to Boateng).  That’s not to say these are wide-open competitions, there might be one guy who has the inside track, but at least we wouldn’t be shocked to see a change at these positions even for important games.  Specifically, here are the options:

Gomez will almost certainly get the starts at the beginning of the year.  With 28 Bundesliga goals and 5 hat tricks, he did everything he possibly could to earn that spot.  So this one is really only halfway “open.”  Nonetheless, fans who remember Olic’s great run in the 2009-2010 Champions League know what he’s capable of.  With great midfielders and wings, any striker is going to get a lot of chances, so it’s not like Gomez created 28 goals all on his own.  If the offense struggles, this is one place where a change could be made, just to try to create a spark with Olic’s energy and tenacity.

We’ve been through this before.  For the purposes of this discussion, assume that Vidal is not coming (although he still might; if not this year, maybe next year).  Your choices are Tymo, Gustavo, and Kroos.  I’m a known Tymo fan, but there are certainly other cases to be made.

Perhaps the most interesting spot.  Gustavo is not a CB, but he did play here for a few games last year and mostly did will (although he made a couple mistakes).  Badstuber probably has the inside track: he’s young, he played here most of last year, and the idea was clearly to match he and Boateng in a double-CB pairing that would serve both FC Bayern and the national team.  van Buyten doesn’t have a lot of quickness and can get burned by fast forwards, but he is good on balls in the air and has a certain toughness in the box.  As the most experienced and established guy in this trio, DvB would probably be the guy Heynckes goes to if the starters make stupid mistakes.

If you run the math, our possible combinations at these 3 positions are as follows (again, assume FOR NOW that Neuer, Lahm, Rafinha, Boateng, Schweinsteiger, Ribery, Robben and Müller are already starting - those any of these could change, too):

I’ve left Petersen, Usami and Alaba out of it for now.  Those three are good players that will hopefully get some playing time, but I don’t see them starting too many Bundesliga and Champions League matches except in case of injury.  With Badstuber and DvB as CBs, there are 6 possible combinations, but with Gustavo as CB, there are only 4 - this is because the other two allow Gustavo to play at CB.  Of course it is possible that we go with some wildly different formation that allows Olic and Gomez to play at once, and it won’t be long before Robben hurts himself.  But for the start of the Bundesliga season, if you were coach Jupp Heynckes, which of these 16 combinations would you go with?