Share All sharing options for: Heynckes Hints at Tymoschuk for Midfield Spot

Aside from the obvious hole at CB, FC Bayern’s biggest question remark this off-season has been who will start next to Bastian Schweinsteiger at CDM. With the Copa America still ongoing, no one is sure whether Arturo Vidal will end up getting shipped out of Leverkusen by the time the season starts. But the club’s recent statements indicate they are dead-set against selling Vidal to Bayern, so it might be another year before he makes the journey down the A3 to Munich. Meanwhile, FC Bayern will most likely have to choose someone from our current roster to pair with Bastian at the other CDM spot. And an item on the club’s official site seems to indicate that Anatoliy Tymoschuk might be moving towards locking down that job.

First, a note of caution is probably in order: the manager is always going to praise his players, especially when talking to the team’s official site.  So a general statement that Tymo “has been training hard” or “is a great player” would be of little value.  But Jupp Heynckes went a little further: “Tymo is an outstanding character, and he'll be playing more often than in previous years ... He's predestined for defensive midfield.” 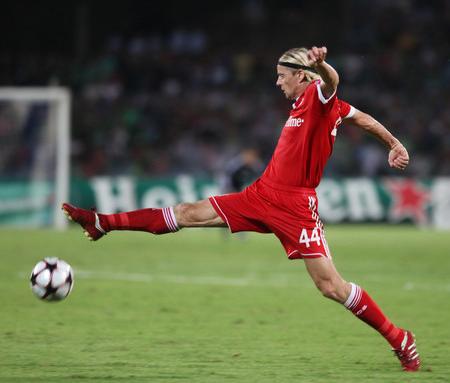 Given the way last season ended, seeing Tymo begin the year as a starting middie wouldn’t be a big surprise even before these statements.  He took advantage of his long-awaited chance to start at CDM with several solid performances.  Not only did he help shut down several good opponents, but he also looked dangerous going forward and helping Bayern create chances.  He’s also played well on the Ukrainian national team in Euro 2012 qualifying.  So Jupp Heynckes’ statements yesterday, while certainly not a promise, make it seem even more likely that the Bastian-Tymo pairing will be on the field to start the season.

The alternatives would be to play Gustavo at that position; to play Kroos at that position; to bring in Arturo Vidal to play at that position; or to adopt an entirely different formation that doesn’t rely on two CDMs.  The Vidal move is one I know a lot of my readers really like, although time is running short if we’re going to pull that off (for this season).  Aside from that, though, Tymo’s competition from our current roster would mostly come from Kroos (who might be too much like Bastian to play next to him) or Gustavo (who might be needed at CB anyway).  Heynckes’ statements yesterday make it seem like Tymo has the edge.

Of course, tomorrow they might ask Jupp about Gustavo, and he’d probably say something very similar.  That’s why it’s hard to rely on the club’s official site for any real insight.  We won’t know anything for sure until the Liga Total! Cup, which takes place next week, and the Audi Cup, which kicks off the following week.  But if Tymo gets the start in one or both of those tournaments and plays well, there’s a great chance he’ll be starting at CDM when the season begins.

- On Sunday, Ajax Amsterdam revealed that Jan Vertonghen has a release clause in his contract.  The exact amount wasn’t specified, but it’s said to be “well over €20 million.”  Doesn’t sound like much of a bargain, unless we think he’s actually better than Jerome Boateng.

- I know we have several readers in India.  Our thoughts and prayers are with them after today’s terrorist attack in Mumbai.

- Finally, congratulations to the USA Women’s National Team on their big win over France today.  We’ll be watching when they take this field this Sunday for the final, but we’ll be back here on this page before then to update you on the latest transfer rumors and team news.  Thanks for reading.