The time is probably ripe to talk about a possible move for Chelsea’s Alex, for two reasons: first, several news reports from the last two days indicate that Bayern’s interest in the player may be serious. A figure in the £ 12 million range would seem a little high (works out to about € 13.5 million), but that hasn’t been confirmed yet anyway. The second reason is that some of our loyal readers strongly disagree with my criticism of the possible move, and think that this could work out very well.

Let’s start with that second reason.  To be clear: I don’t think Alex is a poor player.  I don’t think he’s weak, I don’t think he’s washed-up, I don’t think he’s a bum.  From what I’ve seen of him (maybe 5 or 6 full games over the last few years, plus several other brief clips) he’s a solid player who would be a big help to 90% of the clubs in Europe.  I just don’t happen to think he’d be a big upgrade for Bayern.  At the end of last year, our CB duo was van Buyten + Badstuber, with Gustavo getting some time there as well. Breno finished the year on the bench, but he could be available to fill in if we needed him. 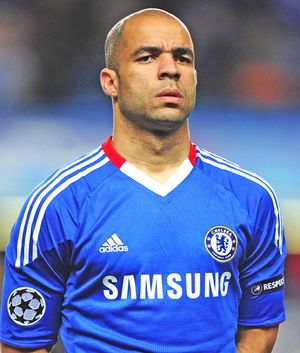 Honestly, I don’t see how Alex is a big upgrade there.  He seems like a very similar player to van Buyten: strong, a tough presence in the box, and good on balls in the air; but also somewhat stiff and can be beaten by quick dribblers.  Alex is certainly better than van Buyten and Badstuber in the middle of the field - he gets forward well, and is good on free kicks.  But so what?  We already have a ton of good offensive players and several guys who can take free kicks.  We even have a new defensive guy (Rafinha) who we’re constantly told is very useful getting forward.  There’s no point in always going after defenders because they’re good in the middle of the field and at the offensive end.  What we really need is a lock-down CB who can stop other clubs’ quickest and best-dribbling forwards, and I couldn’t care less if he’s awful at offense and never even crosses the middle of the field.  Unfortunately, I don’t see Alex as that guy.

But, at the end of the day, I’m just a fan writing on the internet.  Maybe Christian Nerlinger and KHR will decide to go with Alex.  If we get him, I will be the first one to hope he proves me wrong and turns into that lock-down CB we need.  I’ve definitely been wrong before, and maybe he’ll end up being everything we need.  I have to say, though, it doesn’t make a lot of sense to hear people defend him by saying:

“You don’t understand - before David Luiz came, Alex was playing every game, and doing a great job next to Terry!”

The one thing we can really be thankful for is that, one way or another, this saga will come to a close within the next few weeks.  If Alex is being used as leverage in the Boateng battle, then maybe City will give a bit.  If they don’t, perhaps Alex becomes the target.  But there are a few other guys out there as well, and plenty of decent CBs on our roster (although a definite shortage of great ones).  As we’ve mentioned before, the Audi Cup starts two weeks from tomorrow, and the training staff has said they want the roster ready to go by then.  So hopefully the CB hunt will be wrapped up by this weekend.

One more note: the draw for the third qualifying round of the 2011-2012 Champions League takes place this Friday.  Seemingly an irrelevant day, because FC Bayern doesn’t enter until the subsequent playoff round, but this draw will go a long way towards determining who our eventual opponent in that playoff round will be.  From what I can gather, the best teams that would could possible end up facing in that August playoff round would be Udinese, Twente, Benfica, and Dynamo Kiev.  But I’m not sure I have that right.  We’ll look into the details and get back to you with that before Friday.

Also, congratulations to the USA Women’s National Team on their big win.  We’ll be watching Wednesday when they take on France.  Thanks for reading.