Today’s headline is that FC Bayern and Miroslav Klose have been unable to reach an agreement on a multi-year deal, clearing the way for Miro to move elsewhere. Both sides repeatedly said that they would like to work out a deal, but the sticking point was clear: the club wanted a one year contract, while the player wanted a deal of at least two years. This is understandable, as Klose will turn 33 this Thursday; this could be his last chance to score a huge deal, and he doesn’t want to have to go through this same process again next summer.

All last week, the likeliest next stop was said to be Lazio, with the Roman club expressing interest and Klose himself speaking fondly of the possibility.  But La Liga side Valencia is now seen by some as the favorite, with Bild and SkySports both mentioning this as a possibility.  English club Everton is also in the mix, but they remain a long-shot; I would bet that he ends up at Valencia or Lazio, unless some other club is willing to offer him big money for 3 years or more. 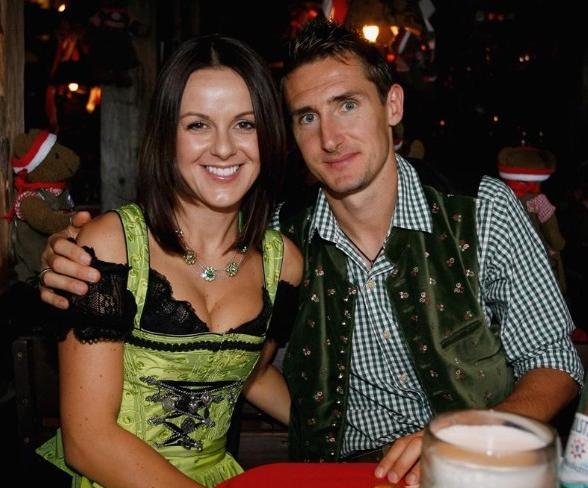 Fare thee well, Miro. Sylwia, you're welcome to stick around ...

Klose has been a useful tool for Bayern - 52 total goals in 149 games in all competitions - but he struggled to equal his impressive 2009-2009 season over the past two years, as first Olic and then Gomez took over star striker duties.  At the risk of alienating my readers, I guess I will say that Miro’s reputation always benefited from his (admittedly amazing) World Cup record.  Based upon his club career alone, I think he would be regarded as a solid and productive scorer, not as the world-class elite striker that TV commentators always seem to see him as.

But, that’s not worth worrying over now.  He did give us 52 goals, including 9 in Champions League play, even when his role wasn’t always entirely clear.  So I’ll just thank him for that and wish him happy birthday and good luck in the future.  He appears to be moving away from the Bundesliga, and therefore can’t do us any harm, outside of a Champions League match-up between FC Bayern and his new club.  Now that would be pretty fun.

In other news, the Jerome Boateng dance continues.  Karl-Heinz remains hopeful that a deal can be worked out, although Manchester City doesn’t appear to have budged from their 17 million pound (20 million euro) valuation.  Apparently KHR or Nerlinger believes that City will come down on that demand over the next few days or weeks.

If Bayern really wants Boateng, then the money will probably be worked out (halfway between 8 and 20 is 14 million Euro.  There, I just worked it out for you).  The question is whether Jupp Heynckes and Bayern’s front office feel like they can get someone better than Boateng.  There are several talented young defender who don’t have quite the proven pedigree that Jerome does; any of those guys might prove to be just as good, but would be a big gamble.  But one thing is for sure: Bayern’s brass recognize that the back line needs another top-shelf defender, and we aren’t ready to call it a day just because we picked up Rafinha.

We’ll be back with more later today or tomorrow, as events take shape.  Several national sides are in Euro Qualifier action tomorrow, including Germany, so maybe we’ll take a look into those matches and hope that nobody gets hurt.  Thanks for reading.