As we’ve been discussing all month, FC Bayern has taken care of most of the pressing off-season roster needs. In fact, only one glaring hole remains: we need a solid, tough-tackling CB to play in the middle of our defense. So far, speculation has gone from Jerome Boateng to Simon Kjaer to Alex to Gabriel Milito back to Jerome Boateng, with a couple other guys making an appearance on the fringe of the conversation. But a few reports this morning bring up a possibility that some of us discussed in the comment section last week: the possible return of one Lucimar Ferreira da Silva.

For the younger set, a brief review: Lucio arrived at FC Bayern in the summer of 2004, after already establishing himself with Leverkusen.  He was a starter for most of his 5 year spell in Munich, forming the backbone of the defense and serving as vice-captain for his final 2 seasons.  There were a number of reasons for Lucio’s departure to Internazionale Milan in 2009, but the main one was that then-manager Louis van Gaal didn’t care for him, and preferred a Demichelis + van Buyten pairing in the middle of the back line. 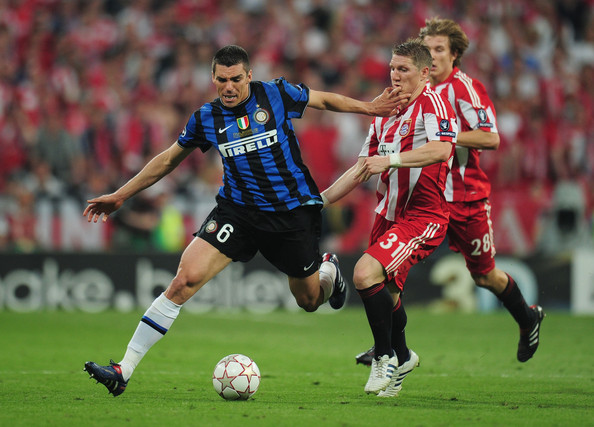 Nice finger to the face there, Luc

Lucky’s exit from the Allianz Arena was not a pleasant one: van Gaal refused to consider Lucio an automatic starter when he (van Gaal) took over, and hinted that the player didn’t fully grasp the tactical aspect of the game.  Lucio was clearly upset by the time he was sold, and had nothing nice to say about LvG or the Bayern board.  After Inter beat Bayern in the Champions League final last year, he took the opportunity to gloat: “I want to thank him for the decision, because I won the Champions League.  And he didn’t.”

But final exits aren’t always final in the world of football, and holes in the line-up have a way of focusing attention.  Inter and Lucio have been trying to reach an agreement on a contract extension, and have been unable to do so thus far.  The club is clearly concerned about offering any kind of long-term deal who is 33 years old and has a lot of miles on him.  And with Ranocchia, Cordoba and Christian Chivu all in the mix, Inter could lose Lucio and still have both CB spots pretty well covered.

Goal.com reports that Bayern has already said no.  Inside Futbol says that Bayern may yet be interested.  No official statement has been made yet; even if Bayern has no interest, Nerlinger may want to leave the speculation out there as leverage in a Boateng negotiation.  Basically, Lucio would bring two really good things to the table:

- he has worked well with several current Bayern players before, especially Schweinsteiger.

As far as possible drawbacks, there are several:

- he’s 33 years old, and is a short-term solution if ever there was one.

- he’s not that fast, and probably ain’t getting any faster

- even with van Gaal gone, we don’t know whether he burned any bridges with current FC Bayern players with his exit 2 years ago.

It seems that Lucio doesn’t care for Uli Hoeness either, and I’m sure the feeling is mutual.  So that’s a stumbling block.  There are definitely some Bayern fans that might fans it weird to try to root for him again.  But, if a Boateng deal can’t be had, Lucio might be a decent option.  Considering we supposedly had a € 60 million transfer pot that we’ve only spent half of, the money is there, if we decided to pull the trigger.

Anyway, this probably won’t come to anything, I just thought it was worth a mention.  The closer we get to the Audi Cup with no new CB, the more I think that Uli and Nerlinger might just be happy to start the year with some combination of Badstuber, van Buyten and Gustavo in the middle.  Personally, I think this would be a mistake, but I’ve been wrong before.  We’ll be back with more later in the week, hopefully with something a little more concrete.  Thanks for reading.