Needless to say, FC Bayern fans have been anxiously awaiting any bit of transfer news since before the even ended season. We had the obligatory "it was always going to happen, but took too long, but who cares ’cause he’s here now" move (Neuer), another "kind of unexpected, but OK I guess we’ll trust our scouts" move (Rafinha), and of course there’s the ongoing "huge hole that we can only hope the board is working quietly to fill" saga (Boateng, Zapata, Kjaer, Alex, or some other CB). But one of the things that has surprised me the most is Bayern’s determination to stock the cabinet with very young, very raw talent at the offensive side of the field. 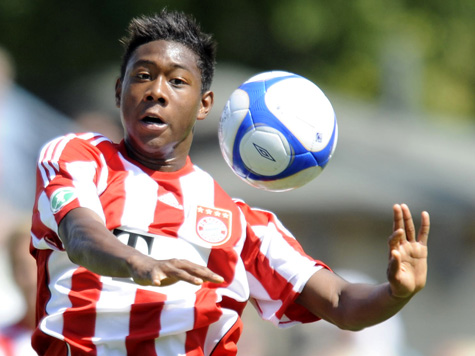 They're all young, but the birthday boy is among the youngest

When I say “surprised,” I don’t mean this in a bad way.  It’s always a good idea to gather up excellent young players if you can get them.  But if all (or even most) of these moves end up going through, Bayern is going to struggle to find a place for some of their new additions.  Leaving out Neuer, Rafhina, and the hopefully soon-to-be-consummated CB move, here are Bayern’s confirmed or strongly rumored transfers this summer:

This guy barely qualifies, as he’s already 22 years old and was the leading scorer in the 2. Bundesliga last year.  Still, he’s got a long way to go to steal minutes from Gomez, Olic, and Müller at the striker positions.  Probably the most polished of the players on this list.  He will get some action at the Audi Cup later this month, but I wouldn’t be surprised to see him buried deep on the bench for much of the season.  If Olic comes back healthy, it’s hard to picture Petersen getting a lot of playing time in Bundeliga or Champions League matches, although in early Pokal games he might get some starts.

This move was “as good as done” 3 weeks ago, but I can’t find any confirmation that he has actually passed a physical and been signed.  If anyone can correct me, I’m all ears.  Having just turned 19 last month, Usami has already excelled in the J-League and for Japan’s U-19 and U-22 teams.  But I can’t imagine him supplanting Kroos as the first forward off the bench, much less taking time from Ribery or Robben.  When the news of his probable transfer to Bayern leaked out, I thought there was a good chance we’d lend him out to a different 1. Bundelisa side, just to get him some regular playing time.  We’ll see.

Happy birthday, Dave!  He turns 19 today.  Nice birthday, too - shares it with Leo Messi (who turns 24 today).  Alaba doesn’t count as a “pick-up,” but his new contract shows a renewed commitment from Bayern, so I’m going to throw him on the list.  Considering he’s already got some 1. Bundeliga experience with both Bayern and Hoffenheim, Alaba would figure to be one of the guys sure to make the opening day roster.  But between Bastian, Tymoschuk, Gustavo, and a still-rumored Arturo Vidal move, Alaba is yet another guy who will struggle to find regular minutes.  I imagine he’d completely dominate the competition if he was sent back to Bayern II, but is it better for him to get regular playing time at a lower level?

Today’s news is that West Ham is interested in Jennings, so this move might not come together after all.  But for most of the week, Jennings-to-Bayern has been reported as nearly a sure thing.  I wish I knew more about him.  What I do know is that he’s short, he can play striker or on the wing, and that he kicked ass in England’s League One this year (their third division).  What I don’t know is … pretty much anything else.  Could this guy seriously be the plan for backing up Ribery and Robben?

Another move that’s already been consummated, Vastic has already started playing with Bayern II.  He’s the son of famous Croatian striker Ivica Vastic, and spent the past season with Blackburn in the EPL.  He’s only 18, and wasn’t even getting regular minutes at Blackburn, so at least one of our new boys will have to be happy playing in the lower division, for now.

This is a diverse lot, so it would be wrong to draw any conclusions about the crowd as a whole.  There is certainly some ball-moving, goal-scoring talent here.  And stockpiling talent is never a bad decision.  But I have to wonder whether some of these guys would see their progress stunted by sitting on the bench.  Players only develop by getting regular game minutes - not necessarily starting, but at least having a defined role that they can prepare for.  This is especially true when they’re still teenagers (everyone on this list other than Petersen).  When a guy like Klose is told “you’re going to sit for the first 70 minutes, then we expect you to come in and create chances,” it must be frustrating, but at least his skills and his preparation routine are already established by the time he’s in his 30s.  If we didn’t even have room for Mehmet Ekici, who I think has the potential to be a star, I don’t see how Bayern intends to find space for Dale Jennings.

My prediction is that either the Usami move or the Jennings move will ultimately crumble - in other words, we might pick up one of those two, but we won’t get both.  Vastic will probably spend the whole year with Bayern II.  But for Petersen and Alaba, we just have to hope that they can continue to grow and mature as players, even if most of their playing time comes in training.

We’ll be back later this weekend with more on the CB hunt.  Speculation has come full circle back to Jerome Boateng, and I didn’t see the point in writing about that.  But subscribe to our twitter feed to stay up to date on the latest news and notes.  Thanks for reading.