From what I can gather, everyone is tired of talking about the ongoing CB hunt. So, let’s turn our eyes a few yards upfield. We went through a number of midfield combinations last year, and the results could be best generously described as "mixed." Up until the last month of the season, I would say the two CM spots were the most disappointing position on the field for Bayern - even more break-downs occurred here than on our back line. But they did pull it together for the last 5 weeks or so, and give Bayern fans hope that this is an area of the field we can dominate next year.

By way of defining the debate, I use the term “midfielder” to refer to players that play above / upfield from the back line, but below / downfield from the forwards.  Players that line up on the wings or in a central-attacking midfield spot right behind the striker are not included - we can talk about them some other time. 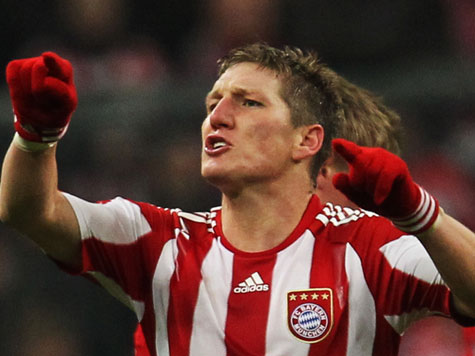 This guy, yes, but who else?

The Bayern midfielder equation starts with Bastian Schweinsteiger.  Although he didn’t have a great year (by his own high standards), he obviously has one of the CM spots locked down as long as he can walk.  He’s taking the summer off from the German National Team’s qualifying campaign, where he clearly wasn’t needed anyway, and I think the rest will do him good.  With a renewed defensive line-up, he should hopefully have a little more freedom to utilize his passing and attack-building game, so we’re expecting a good season from him.

Since Bastian clearly has one the midfield spots taken, there’s not too much to discuss there.  I’ll leave you with this classic:

The national player, who has capped 84 times, recently extended his contract until 2016 with Bayern on Saturday and spoke about his experience with Oliver Kahn.  “I saw him play for the first time in November 2002 when I sat next to him.  The first time he spoke to me was in 2005,” said Schweinsteiger.

But there was obviously another problem with the Bavarian titan.  “Every one of our players had a towel in the changing room.  What I found funny was that none of us could ever find our towels.  I always thought to myself ‘Where is my towel?’ Then I see Oliver Kahn sitting beside me, his hair looking nice, as he polishes his gloves…with TWO towels!” said Schweinsteiger … “At that time, I dared not say ‘you give me my towel back.’  From then on I just brought an extra towel with me so I always had my own towel.”

It’s a great interview and seemingly a good English translation, I encourage you to read it.

Moving right along.  Next to Bastian, there is one big, glaring question mark: should the other CM spot be filled by Tymoschuk, by Gustavo, by some new big name signing such as Arturo Vidal, or should we alter the formation to something other than the classic 2 central midfielders?  What follows are just my opinions, this is a sticky issue so there will surely be disagreements.  Let me know why I’m wrong in the comments, or e-mail them to bayern.offside@yahoo.com.

First things first - no, I don’t think we should chase Vidal or some other new CM target.  With the three guys mentioned above (Bastian, Goose, Tymo), plus the possibility of Kroos stepping in if there is truly an injury crisis, this is a spot we have covered with our current roster.  Honestly, I’m not even sure that Vidal is better than Tymoschuk - but if he is, he’s not THAT much better that we should run out and pay € 15 million for him.

If we were going to get someone new at the CM spot, it should be a young guy who’s got skills but who has yet to prove them at the highest level.  This type of move would cost less up-front investment, and if it worked out, the guy would be ready to step in when one of our current starters is ready to move on.  And I guy like this won’t get angry if he has to come off the bench or only play in Pokal games (or whatever).

This is why I thought we should have kept Elicki - he was talented but unobtrusive, and we could have kept him around on the bench, or even continued to loan him out.  But we don’t need to go get another guy at a spot where we already have several proven, skilled players - not Arturo Vidal, and definitely not Ricky KA-ka.

Second question to answer: should we go with some new formation that would allow 3 midfielders to play together at once?  Some Bayern fans have floated the idea of a 4-3-2-1 formation, or a 4-3-3 formation, or some other grouping whose second number is “3.”  Although this is intriguing, I’m forced to conclude this would be a mistake, just because we have too many guys to cram into those front 3 spots.  Right now, the list of forwards (ie, guys that play ahead of the midfielders) looks like this: Gomez, Ribery, Robben, Müller, Olic, Petersen, and Kroos.  OK, Petersen knows he’s going to mainly see mop-up duty, and Kroos probably won’t be more than a jack-off-all-trades for at least another season.  But even with just Gomez, Olic, Müller, and the R boys, we already have one more guy than we can fit in the 4 forward spots.  Olic is probably the odd-man out right now, but that’s alright because you need depth playing in 3 competitions, and in case of injury.  But if we start talking about moving to a 4-3-2-1, you’re then in the realm of taking Müller or Ribery out of the equation, which I think would be a huge mistake.

So we’re left with the same questions we’ve been talking about for 2 months now: Bastian + Gustavo, or Bastian + Tymoshuck?  This is a tough question and I know that a lot of Bayern fans would disagree, but personally I think that Tymo should get the nod here.  Over the last 4 games, he played really well next to Bastian.  They seem to provide the classic two-midfielder combination - one guy more of a builder/passer, the other more of a good tackler and better at locking down opposing forwards - but ‘Toliy also showed some offensive skills of his own.  He has a lot of confidence and brings a certain toughness to the middle of the field.  Our offensive explosion over the last month of the season was not only the work of Gomez and Robben up front (although clearly those two played very well), but also a result of quick, aggressive build-up from the midfield spots.

This is a tough series of decisions that has to be made, and clearly we don’t have all the information yet.  Even once we figure out exactly who is going to be on the roster, Heynckes is going to have to consider everyone’s injury/fitness status and form in training from week to week.  But for my money, that Schweinsteiger - Tymoschuk pairing really paid off over the last part of the season, and that was when the move was made on the fly.  With a few weeks of training together, those two at the double 6 could really put us where we want to be.

We’ll be back to your regularly scheduled Boateng talk soon.  Thanks for reading.