Share All sharing options for: Needs and Wants (Part II)

In Part II of our analysis, we take a look at FC Bayern’s forward positions and try to determine possible pick-ups for the front half of the formation. Considering we led the Bundesliga in goals scored and most of our crushing defeats were caused by defensive breakdowns, there are fewer pressing needs up front. But there are still a few spots where we could stand to improve and add depth, and certainly some interesting conversations to be had about who’s bringing what to the table.

If you were directed here through our twitter feed at http://twitter.com/bayern_offside or through Facebook, we thank you for your support.  If you haven’t done so yet, consider signing up or “like”-ing us - the summer transfer season is approaching, and you don’t want to be left behind in the unlikely event that we break a big story, or in the much-more-likely event that we engage in unfounded speculation.

On Monday, we promised to give you two new sections of transfer analysis in this Part II - midfielders and strikers.  Well, get ready for some bonus coverage, because I’m actually going to break it into three parts: central middies, wings, and strikers.  There’s some overlap between the positions, but each presents its own situation, starting with:

What we do at this position depends on the formation we end up going with.  Personally, I’m of the opinion that we should not pick up more CMs if they’re going to cost ridiculous amounts of money.  For the past three weeks, we’ve been going with Bastian and Tymo at the double-six.  This works pretty well - Bastian is the good passer who helps build up sustained attacks, while Tymo is the more aggressive defender who can also make quick runs forward.  Kroos can fill in here if needed (although he’s better in a more forward role), and Gustavo could come up and play here if he has to. 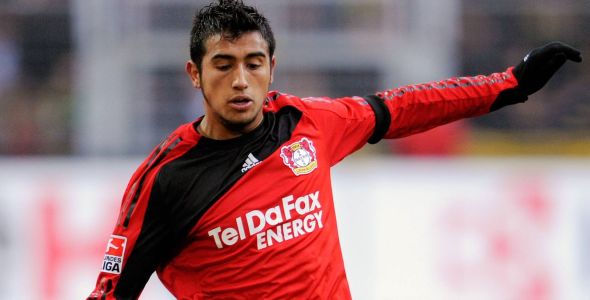 If we do pick up someone to play central middie, it would have to be a hard-tackling, defensive-minded player.  There’s no point in getting another Schweinsteiger-type, especially considering Kroos can do a decent job of that in a pinch.  Arturo Vidal has repeatedly been mentioned as a possible target, with Sky Sports running an article about that today.  I haven’t seen Vidal play very much, but I’m a little doubtful here.  Is he good enough at tackling and tracking opposing forwards to justify a big price tag?  I guess we’ll have to wait and see.  Either way, this should be a move that’s only contemplated once the more important pick-ups have been made.

Now it gets interesting.  When Ribery and Robben are both healthy and locked in, I think we have the most talented wings in the world.  The problem is, they can’t seem to stay on the field.  Both have battled injuries this year, and Robben has thrown in some snarling at teammates and games missed due to suspension for good measure.  This presents a really tough situation for Heynckes and the board: they don’t want to do nothing at this position, given the likelihood that one of these two will get injured at some point next season and we’ll be left with no offensive play-making again.  But you also don’t want to go break the bank to go pick up a young world-class star, because Ribery and Robben very well might play every game next year.  For instance, Ozil was available last summer, but we would have had to out-bid Real Madrid to get him.  That would have been insane, considering Robben was playing so great at the time, and any new guy was basically just going to be an insurance policy.

Ideally, what we’d want here is a guy who meets the following criteria:

(1) Ability to play both LW and RW - if we’re getting an insurance policy, might as well insure both sides with one pick-up

(2) Multi-skilled - while your stars can be guys who specialize in one thing (like Robben’s dribbling moves), you want your back-ups to be guys who are solid at dribbling, passing, shooting, and getting back on defense.  Of course, the trade-off is that they don’t have to be great at any of these things, just good.

(3) Ability to come in on short notice - this is harder than it sounds.  Players who have been the star of the show since their teenage years develop habits that have to be catered to.  They have to go through certain routines before the start of each match, they have to take a few plays to get their rhythm going, and they might need the squad’s offensive strategy tailored around their skills.  A back-up doesn’t have that luxury.  He might go four games in a row without getting any action, then suddenly have to come in 20 minutes into a game.  And he has no say in formations, tactics, etc. - whatever the club needs him to do, he has to be ready.

(4) Can’t get hurt easily - no point in bringing in a guy to substitute in case of emergency if he’s going to be creating more emergencies himself.

So, if we’re going to get someone new to back up the wing spots, it would have to be someone who meets these qualifications.  I wouldn’t be surprised if we name Kroos the back-up wing and just pray that R&R stay healthy.  But we’ll see.

First things first - Müller stays where he is (the “second striker” role, playing right behind the front striker and sometimes slashing forward).  The real question is what to do up top.  Gomez leads the Bundesliga with 24 goals scored, and it’s hard to justify replacing someone with that level of production.  But then you have to consider the fact that Bayern creates a ton of chances for any striker - is Gomez really that great, or does he benefit from playing in front of three killer forwards (Ribery, Robben and Müller) and in a very attacking system?  Or is it a little of both?  With the way he’s been able to find the net, it’s certainly not a position where we need an upgrade.  But nor should we think that he’s irreplaceable.  He is what he is: a big, strong guy who can kick the ball hard, and who regularly smashes it into the goal when it comes to him, but who probably won’t create a lot of goals all by himself through moves and creativity.

Then there’s the Olic question - during parts of last year’s Champions League run, he looked like one of the most efficient strikers in the world.  This season, even before he shut it down with the knee injury, he didn’t have the same touch.  So, we have to ask ourselves, will he return to the great form that he showed in the winter and spring of 2010?  And could he ever hope to regain that form even if he wasn’t named the starter - IE, if his minutes were shorter and more erratic?

Of the two, Gomez would fetch a lot more if we decided to sell.  So perhaps there are two courses of action here: (1) sell Gomez and invest in a new striker, then decide over the summer whether Olic will start, the new guy will start, or try to figure out a way to get both of them out there at once; or (2) stick with Gomez and Olic, and hope that Olic can regain his best form even while not being allowed to play every game.

I figure Klose will leave, because his contract expires after this season.  But who knows, maybe Heynckes really like him.  Anything is possible at this stage.

To summarize, I have no idea what we’re going to do at any of these positions.  Everyone would agree that GK and the back line are the biggest need areas.  But should we leave the front half of the field completely untouched, or do we want to make moves up there as well?  In fact, here’s a more specific question: if we spend a ton of money on Neuer and two defenders, and can make only ONE improvement up front, what should it be: a new CDM to play next to Bastian or fill in when Bastian or Tymo needs a rest; a new wing to back up Ribery or Robben in case of injury or fatigue; or a new striker who’s maybe a little more skilled and elusive than Gomez?

If I had to pick, I guess I’d go with option 2, back up at the wing position, but only if we could find the right guy.  But I’d love to hear what people think.  Let me hear your thoughts in the comments section, or e-mail me at bayern.offside@yahoo.com.  Thanks for reading.