Share All sharing options for: Rafinha Deal Complete, Aguero in the Frame?

The most recent news online is that Rafinha flew into Munich yesterday to put his signature on a contract with FC Bayern. I haven’t been able to confirm that a deal has actually been signed (right now, it’s about 11:30 AM Washington, DC time), but it appears that it has/will take place unless Raf fails the physical.

We discussed this deal on Friday - Rafinha is a pretty skilled player who has played well in the Bundesliga in the past, but this certainly isn’t the kind of move that will instantly fix our problems on defense.  It looks like Lahm will be moving to the left, with Contento now the first substitute at both LB and RB.  Keep in mind Rafinha played some middie this past season with Genoa, so if we’re hit with crazy rash of midfielder injuries, he could move forward and Contento and Lahm would handle the corners.  But that’s unlikely, considering our depth in the midfield (Bastian, Tymo, Goose, Kroos).

A more frightening story emerged on Sunday, with reports indicating that Bayern has joined the list of clubs interested in Sergio Aguero, the Atletico Madrid striker.  First of all, note that the link is to goal.com, a source that often inflates rumors and speculation into stories (these were the guys that said Bayern had agreed to a Coentrao deal on two separate occasions).  So I’m not ready to worry about it yet, Aguero will still probably end up at Real or somewhere in England.  But if this turns out to be true, I think it’s a huge mistake. 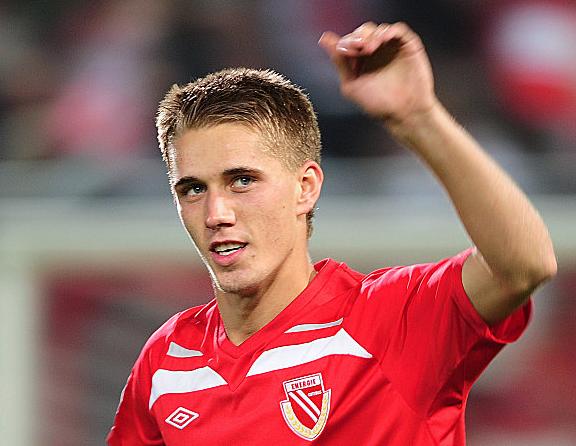 We JUST got this guy. Remember?

First of all, we’re already set at striker.  Gomez, although he sometimes doesn’t look the most graceful, has done a pretty good job up front (led the Bundesliga in goals scored, racked up 5 hat tricks).  Olic was one of the best strikers in the world in the spring of 2010, before he got hurt.  It’s true that you never know how well a player will return from a knee injury, but it’s not like Ivica is our only hope - we HAVE a good striker at the front of the formation right now (Gomez), Olic should be able to take his time in easing back into the roster.  Buying a new striker for 40 million Euro (or whatever insane figure is being thrown around) makes no sense.

In addition to these two, we also just bought a pretty talented young striker in Nils Petersen.  I’m not saying he’s the equal of Aguero, but considering the guys we already have up front, Petersen seems like exactly what we need - a player who has conquered the 2. Bundesliga, who’s shown flashes of very good goal-scoring ability, but who is young and unproven enough that he’ll be happy as a substitute or playing in less important games (early Pokal matches, etc.) until his time comes.  This was a good move that left our striker position in the right place - a big, strong, productive scorer as the starter; a talented scorer with a high work rate as the second option (or maybe starting in conjunction with the big, strong, productive scorer); and a bright young learner to fill in the gaps and be ready to take over in a few years.  Klose is probably going to leave, but he wouldn’t have played much anyway.  Throwing away this balance by getting in a bidding war for a 4th striker (or 5th, as Müller plays something like a striker role and can move up to the very front if he has to) would be a major mistake.

Personally, I really like Aguero.  He’s quick, he can score with both feet, and he’ll probably be very effective wherever he goes.  But that doesn’t mean any club with money should run out to snatch him up - we still have big holes in the back line, and throwing away money on a new striker would limit our ability to get a great CB.

Anyway, I’m not losing any sleep over this deal that will probably never go down.  Bayern still needs to pick up one great CB with good feet and solid tackling skills.  Heynckes and Nerlinger are aware of this, and I think (hope?) that they won’t go into the season without addressing that need.  We’ll be back tomorrow or Wednesday to take a look at the market for defenders (again), and to confirm that the Rafinha deal took place.  Also, follow us on twitter at http://twitter.com/bayern_offside to get news and notes as soon as they become available.  Thanks for reading.