Share All sharing options for: FC Bayern: Home of Gunner Rejects Since 2011, Apparently

Well, if today’s crazy rumors are to be believed, Gael Clichy will be joining his once and future teammates Samir Nasri and Nicklas Bendtner at the Allianz Arena this fall. I guess this happens any time a major club with a big budget announces that it plans to spend a lot of money - for the entire summer, any player of note who wants to leave his team will have people saying "hmm, maybe he’ll go to Bayern?"

By way of review, our biggest needs going into this offseason were GK and CB.  GK appears to be taken care of (although, as discussed yesterday, Schalke is attempting a last-ditch attempt to give Neuer a new contract).  Our biggest remaining hole is clearly at CB.  I don’t see any real need to bring in a striker, especially after signing Nils Petersen, and anyone we bring in as a wing would have to be OK with being a backup to Robben and Ribery. 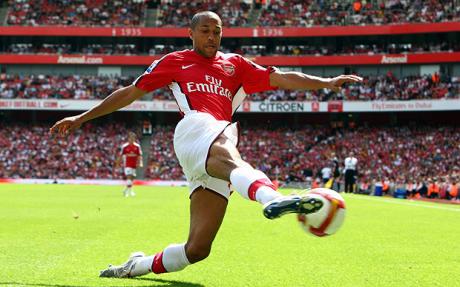 Of the three, a move for Clichy might be the least outlandish

Between these 3 rumored Arsenal pick-ups, Clichy (who pays LB) might be the best fit.  I wish I’d watched more Arsenal games the last few years, I only remember seeing him play 2 or 3 times.  To be honest, he never looked that great to me.  He has a good motor and works hard, but he’s not the kind of guy who can lock down opposing wings.  He also seemed prone to mental mistakes; but, again, maybe I just caught him on a bad day.  Would he be better than Contento?  Maybe, but not by that much.  Would he be better than Coentrao?  No, but the news has us missing out on Coentrao with Nerlinger’s unwillingness to pay 26 million Euro - the right decision, in my book.  Even so, Clichy seems more like a panic move.

Nasri is a better player, in my opinion, but makes less sense.  I can’t see him being satisfied as a back-up, and I can’t see why Bayern would want to pay big money to bring in a guy to serve as a back-up, especially when he would probably be dissatisfied.  If we bring in a new wing, it should be someone with talent but still a little unproven, and who would be OK with working their way onto the field over the next few seasons.  Really, what we want is Samir Nasri fron 3 years ago.

Bendtner makes no sense.  We discussed this yesterday, for those who are interested.

What we need right now are two things: we need to wrap up the Neuer deal, and we need to get a strong, skilled CB who can lock down Bundeliga strikers.  Whether that’s Boateng, Simon Kjaer, or someone else remains to be seen, but if we can’t get someone of that mold, this entire summer will be a waste.

We’ll be back later this week to take a look at Milan’s laughable plan to steal Ribery, examine KHR’s recent comments, and address the inevitable rumors that Bacary Sagna and Denilson are coming to Bayern.  Thanks for reading.