Why Would We Want Nicklas Bendtner?

Share All sharing options for: Why Would We Want Nicklas Bendtner?

Woke up today to find rumors swirling about a curious possibility: several sources have linked Niklas Bendtner with a move to the Allianz Arena. Normally, I would dismiss this as one of those stories that agents and journalists cook up but that will never go anywhere. And that’s probably all it will end up being, but I have to admit I was surprised to see the story reported in a number of normally reputable places, including Sky Sports. Bendtner’s father and agent specifically mentioned Bayern in his comments: "There is real interest from both English and German clubs, and Bayern Munich were after him earlier."

Of course, that last word is key: “earlier.”  None of today’s new items (all taken from the same source) mention how much “earlier” this was, but it very easily could have been months ago, possibly even during the January transfer window.  Bendtner clearly wants to leave Arsenal, and it might be that the writers of various sports pages don’t have any real idea as to where they might be headed, so they went with the one big club that was mentioned in Bendtner’s fathers remarks, even though he doesn’t even appear to be saying that his son will be headed to Bayern now.

Some newspapers report the story with a more subdued title, saying Bendtner is “open to a move” or that he “wants out,” but Tribal Football breathlessly reports that Bayern is “chasing Arsenal striker Bendtner.”

Where to even begin … first of all, we have a striker who just led the Bundesliga in goals by a wide margin.  Gomez can be legitimately criticized for a few things (I’ve found fault with him before on a few occasions), but he’s worked out very well since he took over the job full time.  I don’t see any reason we’d bring someone else in to compete with him.

Second, our CAM / “second striker” is one of the best in the world.  At only 21 years old, Müller has already shown a lot more talent and creativity than Bendtner, and is already penciled in at that spot for the next decade. 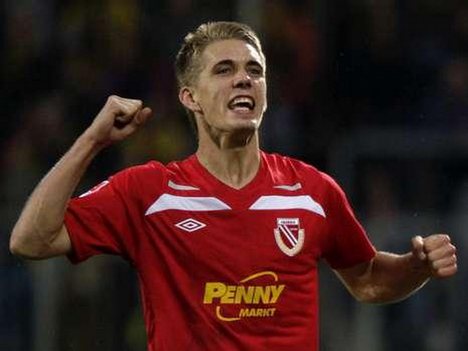 Third, our back-up strikers are already among the best in football.  Olic was arguably the best player in the Champions League in 2009-2010, and could even challenge Gomez for his spot depending on whether he regains that form.  He’s coming off of an injury, but all indications are that he’s progressing nicely.  And Nils Petersen, our recent pickup from Energie Cottbus, has good speed, an accurate shot, and has impressed during his time in the 2. Bundesliga, despite still being younger than Bendtner.

I actually think Bendtner is a decent player.  He couldn’t find his way onto the field for much of this season, but I’ve seen him score a few good goals for Arsenal in the past.  He can be pretty dangerous with the ball at his feet.  But I’ve never seen any indication that he could thrive at one of the wing positions, and if we pick up any forward, it would have to be someone who could back up Robben and/or Ribery.

It appears that the story took shape through the following steps:

(1) Bendtner decided he wanted out, and told Wenger or someone else at Arsenal

(2) Bendtner’s father was either asked about the situation by a reporter, or went out of his way to start a conversation with a reporter

(3) During the conversation, the father mentioned that Bayern was interested “before” (probably this past January)

(4) The reporter shortened the story to “Bendtner leaving Arsenal, Bayern is one of the teams that has been interested in him.”

(5) Other, even lazier, news outlets further shorten the story to “Bayern Chasing Bendtner!”

And that’s how they sell papers.

I hope nothing comes out of this - again, not because I think Bendtner is a bad player (I don’t), but because we don’t need him, and he would only stunt the growth of Petersen.  At best, Bendtner would be the first striker off the bench for Bayern - that’s at absolute best, and he probably wouldn’t even end up as that.  Given our numerous other, more pressing needs, I can’t see why we’d spend money on him now.

In other items, Schalke is trying to work out a last-ditch contract to keep Neuer, Juventus wants to make a move for Ribery (ha!), and Manchester United appears to be contemplating a move for van der Wiel.  We’ll be back with more tomorrow or Wednesday, hopefully with a story that has a little more substance behind it.  Thanks for reading.