Needs and Wants (Part I)

Share All sharing options for: Needs and Wants (Part I)

Over the past few weeks, we’ve looked at possible transfer moves from an outside-in perspective, examining players we’re rumored to be interested in and then trying to see how they’d fit into our roster. With only a few games left in the Bundesliga season, I’d like to look at the situation from the other end: analyzing our current squad, and then trying to figure out where upgrades and additions are needed.

For purposes of this column, I have the roster broken up into four parts: Goalkeepers, Defenders, Midfielders, and Strikers.  “Midfielders” will include both CDMs and wings (even though wings are classified as forwards by some systems) and “Strikers” will include both front-of-the-formation lead strikers like Gomez and second-striker/CAM types like Müller.  This is a long and in-depth project, so we’re breaking it up into two parts.  Part I appears below, while Part II will be published tomorrow or Wednesday.  As always, subscribe to our twitter feed at http://twitter.com/bayern_offside to be notified when a new post goes to press.  Away we go …

This is the simplest fix - we all know what’s probably going to happen.  Neuer has been the target for many months.  Despite the high price tag (current rumors have Bayern shelling out 9 million Euros a year as wages, in addition to the transfer fee), we’ve gone over this several times and I think we have to do it.  We’ll be back to winning trophies next year if we can cut down on goals allowed by just 10-15 percent through ‘keeping and defensive improvements.

An interesting point was brought up yesterday by reader Paymon - does Bayern need a new back-up GK?  If Neuer arrives and Kraft and HJB both leave, is Sattelmaier good enough to be the first back-up?  Sattelmaier is really young and inexperienced, so it’s unclear whether we can count on him to fill in for Neuer on occasion.

I guess I’d prefer to see what Sattelmaier can do over the summer and maybe in some low-pressure games (early rounds of the Pokal, etc).  But if he looks too green, yeah, we might need to spring for a back-up if Kraft and Butt are gone.  Either way, though, I think that can wait until the winter transfer window.

This one is a little deeper, but still straightforward.  We need two new players for our back line: a new CB and a new LB or RB (Lahm’s versatility gives us a little flexibility here).  Failing to pick up one of each would be a big mistake, while going out to get two new guys for the back corners (IE, Coentrao plus van der Wiel) would probably be overkill. 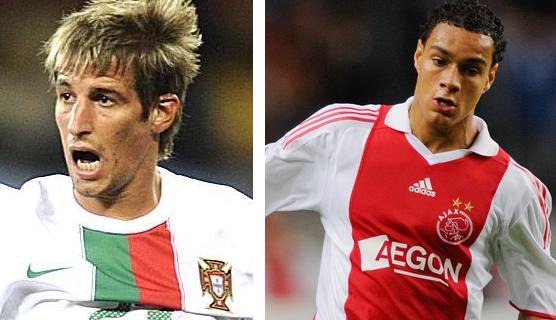 One or the other, but not both

So, three questions to be answered:

I guess there’s a possibility that someone else could get involved, but I think it will be one of these two.  At various times, each of them has allegedly been “a sure thing” to join FC Bayern.  Coentrao is rated a bit higher, but most of his supporters talk about how great he is going forward.  That’s cool and all, but we really need someone who can be a lock-down defender on opposing wings.  Offensive skills are just gravy at this point.

van der Wiel is a tiny bit taller and heavier, and less dangerous going forward, but probably the equal of Coentrao as far as on-the-ball defending.  Robben seems to like vdW; who knows what kind of effect that will have on our summer decision-making.

I guess at gun-point, I’d prefer Coentrao, just because it wouldn’t require Lahm to move again, but either of these two would be great by me.  What I DON’T want to see is wasting money on both of them.  Stockpiling three world-class players at a position where you can only start two just makes no sense to me.  I’m sure one of them can play out of position if he has to.  But that’s something you deal with when you have no option, because of injury, suspension, or complete ineffectiveness.  There’s no point in going out to spend 25 million Euros on a guy, knowing the whole time you’re going to have to play him out of position.

More options here - mentioned have been Jerome Boateng, Simon Kjaer, Alex, Benedikt Howedes, and others.  Recent news reports indicate that Schalke will probably not sell Howedes, although I think he’d be a great addition if we could pry him away.

Of the others, I think Kjaer mught be the best move.  He’s young, he moves well, and he has Bundesliga experience.  Alex is the one I’d be least excited about; luckily, that talk has died down in recent days.

(3) Which of our current CBs will stick around?

Badstuber is a sure bet to stay, probably starting opposite the new guy.  Gustavo will be back, because he can play multiple positions (even filling in at CDM if he has to).  I’d bet Breno leaves, but that’s just a guess.

The real question here is Daniel van Buyten.  No question about it, the Big Belgian is a step slow at this point in his career.  He can get burned by quick-footed players with the ball on the ground.  But, he’s looked pretty decent over the past 3 weeks (since returning from a long lay-off), and he’s still a strong physical presence in the box.  There are really three questions to answer here: how much playing time would he get (first CB off the bench and occasional starter vs. buried deep on the bench); would he prefer that level of playing time over starting somewhere else; and does Bayern value his leadership and presence enough to keep him around even when he won’t be playing as much?

Like most fans, I’ve been very disappointed with Bayern’s season, and eager to see some new faces come in.  At the same time, there’s a risk you take when you allow too many of your long-serving veterans to leave.  Much of this group has been around since the start of the 2007-08 season.  Since that time, they’ve won two Bundesliga titles, two Pokals, and gotten as far as the Champions League final on one occasion.  Sure, they’ve stunk for much of this year, but I think the need is to improve at the most important positions, not to junk all of the guys who have been successful over the past four years.

A lot of things go into a consistently successful football club.  It’s not just having a bunch of fast guys who can dribble the ball.  Championship-caliber clubs thrive on consistency - they have a leadership hierarchy, a consistent training regimen, and a stable group of personalities.  Even small things that the common fan never considers make a big difference - what days do the guys get together to watch film of the last week’s match?  On the road, who stays where in the hotel?  Do the guys meet up in the lobby, or outside of one player’s room?  If practice starts at 10 AM, do they show up early to stretch?  If so, what time?  If you start dumping your established veteran leaders too quickly, you lose that team DNA, and it can take a while to re-create it.

I suppose this is a long-winded way of saying that I think DvB should be kept around.  Not only because we need the depth and he’s probably as good a fourth CB as anyone else, but because we don’t want to lose too much of that Bayern DNA.  He’s a respected leader, a loyal teammate, and he gets along well with Ribery.  And hell, maybe we’ll get into a team-wide brawl with some other club next year.  I guarantee we’d be happy we kept him around then.

We’ll be back tomorrow or Wednesday with Part II, wherein we look at needs at the midfield, wing, and striker positions.  Although our offense has been very solid most of the year, I still think one or two pick-ups are coming.  If you have anything you want to see taken up in Part II, feel free to e-mail me at bayer.offside@yahoo.com and we’ll make sure it gets addressed.  Needless to say, we’ll also have a preview of the St. Pauli match and a look at the updated standings later in the week.  Thanks for reading.