In one of the least suspenseful awards ceremonies ever, the Bayern Munich Offside page would like to issue our season’s Most Valuable Player. First, some news items and links from around the world:

- Bayern has been linked to a move for Arsenal wing Samir Nasri. I’m intrigued … on the one hand, we do need a back-up for Robben and Ribery, who have struggled with injury and aren’t getting any younger. At the same time, the suggested price (25 million pounds) is ridiculous, and it remains unsettled whether Nasri would be happy being a back-up. Barring something crazy, R & R will certainly remain our starters as long as they stay healthy.

I’m going to chalk this one up to media-generated rumors.  But if more details emerge, we’ll break them as soon as we hear.  I do think he’d be a great super-sub, and eventual replacement for Ribery.  The question is, why would he come here just to wait for someone to get hurt?

- According to PETA, FC Bayern is the most vegetarian-friendly club in the Bundelsiga.  Moving right along …

- AC Milan and Valencia have emerged as suitors for Klose.  His contract expires next month, so we don’t get anything for him if and when he leaves (other than getting out from under his wage bill).  I believe I predicted Sevilla, did I not?  Not too far off …

- Lastly, Bayern defeated Zenit St. Pete in today’s friendly by a score of 4 goals to 2.  Klose has a brace in continuing his Farewell / Or Sign Me to a New Deal tour.  And, most importantly, no one blew out a knee.

Now … as alert readers have already discerned, this year’s MVP award goes to striker Mario Gomez.  He was the strongest candidate even before the past month, but his great form over our final 5 game run to Champions League qualification just sealed it.  We went over some of Mario’s accomplishments on the Match Day thread this past weekend, but for those who weren’t around: 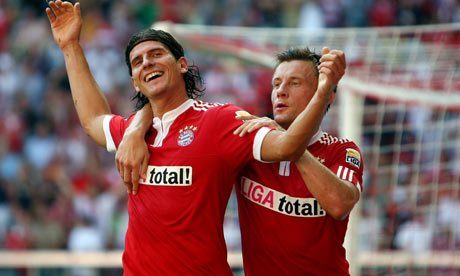 We hope to see Gomezolic together again in the near future

- Despite not even being Bayern’s starting striker at the beginning of the year, Mario led the league with 28 goals (Papiss Demba Cisse, with 22, was the only other guy to even get 20).  He also equaled the most goals scored by a player in a single season since the beginning of the 21st century.

- Gomez also led the club in shooting efficiency: in Bundesliga play, his 28 goals came on 95 chances, meaning he found the net on about 29.5 percent of his shots taken.  For purposes of comparison, Ribery’s percentage was an even 10 percent, Müller’s was 20 percent, Robben’s was 22.22 percent, Klose was under 5 percent, and Kroos hit the net just once out of 43 shots.

- Most impressively, Gomez notched 5 hat tricks.  Because opponents often clamp down on a guy after he scores 1 or 2 goals (even telling their CBs to just stick tight on that one guy), picking up 3 is always a difficult feat.  To do it 5 times in a season is amazing.

Now, I should probably point out … I don’t think Gomez is in the uppermost echelon of the world’s talented players.  I can easily think of 6 or 8 strikers who are more fun to watch.  He never seems to dazzle anyone with moves and creativity, and he can even be spotted standing still when the ball is elsewhere (a big departure for those of us familiar with Olic).  And of course playing in front of talented forwards and midfielders means that Mario will always see a lot of easy chances.

But, at the end of the day, this is a results-oriented business.  Anyone who can lead the league in goals - by a big margin - even after starting the season on the bench is clearly doing his job.  The striker position is his, barring injury (although I think Olic will get some minutes too, either in Pokal and early Champions League play, or in a new formation that uses both of them).  So, join me in congratulating or Most Valuable Player, “Super” Mario Gomez.

Back with more on the transfer rumor front tomorrow or Friday.  Thanks for reading.